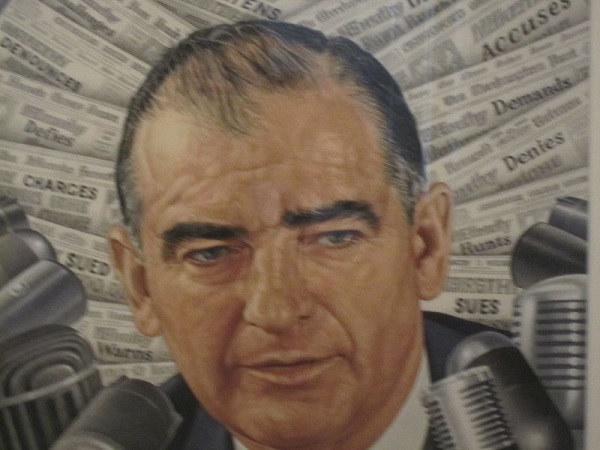 Surge Summary: Seventy years ago, Senator Joseph McCarthy was savaged for going after the equivalent of radical Leftists in American government. Today, many conservatives face the same threat.

Young and uninformed Americans need to know that Senator Joseph McCarthy, while not perfect, was a true patriot and for sure was not pathetic or paranoid, as painted by the unreliable, leftist media. His main motive in the early 1950s was to remove Communist spies from our government, the military, and Hollywood. He recognized Communists as determined, dedicated, desperate, and dangerous desperados determined to destroy freedom from the face of the earth.

That is not a hyperbolic statement. Moreover, those who give assistance, defense, and comfort to Communists—whether they are called useful idiots, dupes, fellow travelers, liberals, or progressives—are also evildoers who should be vigorously exposed and removed from positions of influence. I would go further than McCarthy and forbid any Communist from teaching school at any level.

I believe in academic freedom, but I don’t believe in suicide and to finance your own demise is sad, stupid, and suicidal. Not very smart.

Co-existence with Communists is as stupid and hopeless as trying to coexist with cancer.

Before McCarthy started making huge waves, Julius and Ethel Rosenberg had been arrested on June 17, 1950, for stealing atomic bomb secrets for the Soviets. They were convicted in March and executed in June of 1953, so Americans knew there were traitors among us. Additionally, the House Un-American Activities Committee started looking for spies among us as early as 1946.

That was too late since a cadre of traitors was already ensconced in very high places.

McCarthy hired Roy Cohn, a young, aggressive attorney, as chief counsel who went after the witnesses with such fervor that it often hurt the cause. Earlier, Cohn had a significant part in the 1951 spy trial of the Rosenbergs. Cohn’s interrogation of David Greenglass, Ethel’s brother, resulted in the Rosenbergs’ conviction and execution on June 19, 1953, at Sing prison. David, to save himself, threw his sister under the bus or, more correctly, into the electric chair.

Cohn was a closet homosexual, which was used against him and McCarthy, although that issue stayed beneath the surface most of the time. Cohn declared vehemently to his dying day that he was “not gay.” He died of AIDS in 1986 after an incredibly defiant, destructive, and decadent life. In retrospect, it is common knowledge that Cohn was the queerest of the queer.

Interestingly, when the leftist media went after McCarthy by going after Cohn, I defended Cohn and McCarthy in my 1983 book, Is God a Right Winger? in a chapter titled, “Was Senator Joe McCarthy a Friend or Foe of Freedom?”

In defending Cohn and McCarthy, I wrote, “Yes, they spoke of him [McCarthy] in admiration and anger, in delight and disdain, in respect and revulsion. Especially in America, the people chose sides. Some people said that they were against Communists, but they did not like McCarthy’s methods. (But that was only a ‘red herring.’) They did not like his target—the exposure of the Communist menace and the culpability of fellow travelers, Liberals, and Socialists.”

Every word in the chapter has proved to be accurate, and I stand by every word. I was wrong in denying Cohn’s perversion but right in that it had not been confirmed, and no one should be so charged without a confession or conviction.

Cohn hired G. David Schine, a strong anti-Communist, to join McCarthy’s staff as a consultant. There were unsupported charges that Cohn and Schine were “lovers,” a charge that was not proven. In 1953, Schine was drafted into the U.S. Army, and Cohn pulled all the strings to get special treatment for him. He foolishly pressured the Secretary of the Army and Schine’s company commander to get him light duties and exemption from deployment overseas. Cohn even threatened to “wreck the Army” if he did not get his way.

That conflict and McCarthy’s charge of Communists in the Defense Department led to the Army–McCarthy hearings of 1954. The Army accused Cohn and McCarthy of using illegal pressure to get Schine special treatment. McCarthy and Cohn replied that the Army held Schine “hostage” and tried to derail McCarthy’s investigations into Communists in the Army.

During those hearings on June 9, 1954, McCarthy suggested Frederick G. Fisher, a young associate in the law firm of Joseph Welch (chief counsel for the Army), was a long-time member of the National Lawyers Guild that was “a legal arm of the Communist Party.” And everyone knew that was true beyond a doubt; however, Welch feigned shock, sorrow, and surprise and playing his part expertly said, “Let us not assassinate this lad further, Senator. You’ve done enough. Have you no sense of decency, sir? At long last, have you left no sense of decency?”

Naïve Americans swallowed the line along with the sinker and hook. It sounded so principled, but it was Welch playing to the gallery of the gullible. He had developed his acting ability in the 1947 television series, the Kraft Theatre. And his acting was superb, as displayed in his feigned anger and hurt. He should have received an Academy Award.

Welch’s reaction was to suggest that McCarthy had carelessly and callously outed an innocent “lad” as a Communist (since he belonged to a Communist front). Still, Welch knew that The New York Times had already outed him a few weeks earlier. So, the much-discussed retort by Welsh was much about nothing. However, it does show the hypocrisy of the leftist media: it was a despicable thing for McCarthy to expose the “lad,” but not for the Times to do so earlier.

Welch dropped his head after his famous retort and walked into the corridor, where he managed to weep copious tears for the reporters. Leftists keep tears close to the surface to use during such times. The following day, major newspapers across the nation published Welch’s tear-streaked face on the front pages.

Much can be charged against McCarthy, but he was not a hypocrite, as was Welch.

In all his public and private hearings, McCarthy made a valiant effort to identify Communists and their sympathizers in the U.S. Government and the military. He refused to call names of the purported spies since they had not admitted guilt or proved to be Communist spies during a trial. Senator McCarthy wanted Communists out of high and essential positions not placed in prison as the left often asserts. He wanted traitorous spies in prison.

McCarthy’s enemies in the Senate demanded he produce the names of all the alleged spies in government positions, but he was extremely reluctant to do so. He did not want to reveal suspects’ names until their guilt had been admitted or proved. However, the leftists and the soft-on-Communism crowd didn’t care and insisted McCarthy “name names.”

The radical leftists and stupid sympathizers came down hard on Joe, accusing him of everything, trying to turn everyone against him. They were virulent, vicious, and vile in their personal attacks on him and his motives. Liberals provided a public message: the third rail of politics is— don’t reveal the leftists as the enemies of nationalism, freedom, personal initiative, free enterprise, honesty, and decency.

The Senator’s statement that did him in was, “[C]o-existence with Communists is neither possible nor honorable nor desirable. Our long-term objective must be the eradication of Communism from the face of the earth.” He made it worse by saying, “[Y]ou cannot offer friendship to tyrants and murderers . . . without advancing the cause of tyranny and murder.”

That did it. McCarthy had touched the deadly third rail of politics. Don’t go after the leftists and reveal their dirty, dark, deceptive, and destructive side.

It is the same in 2021. Don’t name names and identify the far left lowlifes in the media, Hollywood, and politicians as anti-American, anti-freedom, and anti-commonsense. To do so might invite the appalling charge of white supremacy.

Senator McCarthy thought Americans who spied for our enemies should not have the privilege of working in sensitive government positions or serve in the military. And traitors should be hanged.

I agree with McCarthy.

The post ‘Sir, Have You No Sense of Decency?’ Slandering of Sen. Joe McCarthy appeared first on DailySurge.