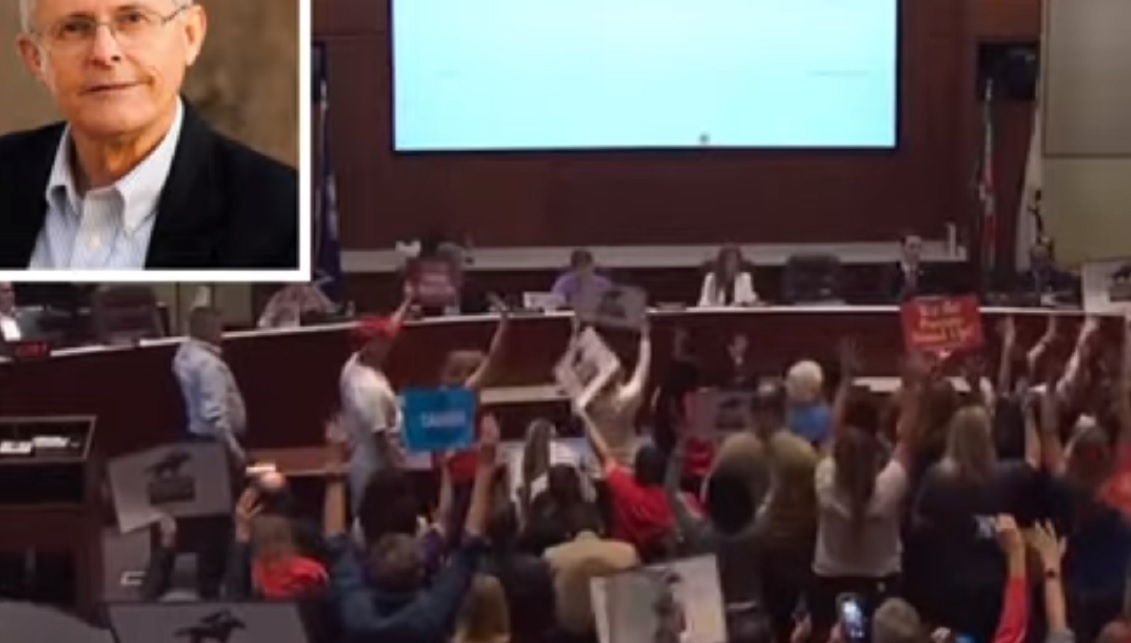 Surge Summary: Critical Race Theory, outrageous sexual education, transgender propaganda? All are being taught in America’s public school classrooms. Some parents have had enough – and are letting that be known.

The Left may finally have overreached and stirred a sleeping giant – parents.

In Loudoun County, Virginia, where six school board members are facing a recall campaign, the board unanimously voted to shut down public comment at a meeting this past week where 250 parents had signed up to speak.

They did so after Republican former state Sen. Dick Black let the board have it with both barrels in his brief turn at the microphone.  He began by addressing the case of Christian teacher Tanner Cross, who had been suspended after telling the board at a previous hearing that he would not address boys as girls and vice versa.

After Mr. Cross filed a lawsuit with the help of Alliance Defending Freedom, he was reinstated, but school officials appealed the judge’s ruling.  They still want to make an example of Mr. Cross.

Sen. Black got right to the point after introducing himself.  I include his full remarks as a guide for parents in how to confront their local commissars:

“You retaliated against Tanner Cross by yanking him from teaching for addressing a public hearing of this board.  The judge ordered you to reinstate Mr. Cross because if his comments were not protected speech, then free speech does not exist at all.”

Voice rising, he continued: “It’s absurd and immoral for teachers to call boys girls and girls boys. You’re making teachers lie to students and even kids know that it’s wrong.

“This board has a dark history of suppressing free speech. They caught you red-handed with an enemies list to punish opponents of Critical Race Theory.  You’re teaching children to hate others because of their skin color and you’re forcing them to lie about other kids’ gender.  I am disgusted by your bigotry and your depravity.”  The crowd erupted in applause.

At that point, the chairwoman cut him off.  He’d had his 72 seconds, 12 more than allotted.  The board then voted unanimously to cancel further public comment.  This angered many of the parents, some of whom refused to leave, including a man who was arrested for disorderly conduct and resisting arrest. It’s no wonder that Fightforschools.com is fast gathering recall signatures.

These kinds of sex-obsessed “educators” used to hang around schoolyards in raincoats full of candy in their pockets.  Now, they’re in the classrooms with the blessing of school authorities.

“We are furious,” a mother at Dalton told The Post.  “We were horrified to learn this was shown to our first grade 6- and 7-year-old kids without our knowledge or consent.  But it’s so hard to fight back because you’ll get canceled and your child will suffer.”

She might want to consider a change.  Faced with the parents’ revolt, the Columbia superintendent issued an apology and a promise to keep better track of what’s going on.  By contrast, a Dalton spokesperson said, “These videos align with nationally recognized methodologies and standards.”

Others are rising up to fight the system.  In California, which has had “comprehensive sex ed” in elementary schools for years, a group of mothers protested outside the office of state Sen. Connie M. Leyva, who chairs the Senate Education Committee and the Senate Democratic Caucus.  She backs explicit sex ed curricula that includes descriptions of how to engage in manual stimulation and oral sex.  The children are also taught about gender identity, sexual orientation and sexual techniques during other school subjects that have no opt-out provision.

Asked about the parents’ concerns, she blew it off: “There’s nothing in there that is not age appropriate.”

Representing Pomona and several other cities in the “Inland Empire,” Ms. Leyva says she plans to run for re-election in 2022, and then run for state school superintendent in 2026.

That’s a big job.  California has more than six million children in its K-12 public system in over 10,000 schools.  What happens there tends to affect the rest of the nation eventually, for good or ill.

Those that stay need to fight hard to keep their children safe from Marxist indoctrination in places like California, New York and Loudoun County, Virginia.

A parents’ revolution is underway.  If the Republicans figure out how to assist them and harness this energy (see Sen. Black for details), we may yet see our liberty preserved.

Robert Knight is a contributor to the Washington Times. His website is roberthknight.com.