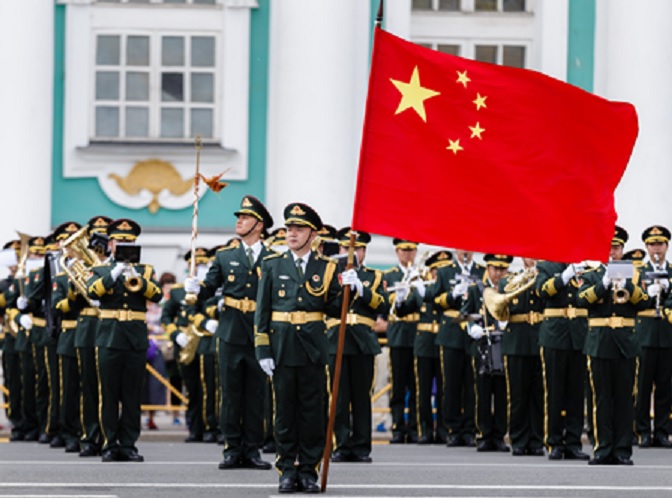 Surge Summary: The Chinese Communist government has been a threat to America for a long time. America has responded inadequately to the Chi-Com threat for a long time as well. It continues to do so now.

China’s war against America has already started; however, the bombs have not been released— yet; but the Chinese Communist Party (CCP) is serious and has plans to conquer America. World domination has been their vision for almost a hundred years and still is as the CCP celebrates its 100th anniversary this month. Last Thursday, Communist Butcher-in-chief Xi Jinping promised to bash any nation that threatened China’s sovereignty or threatened reunification with Taiwan.

What will Biden do when China takes Taiwan? According to his emails, Hunter Biden has had a longtime lucrative business relationship with the commies. (Been a long time since you’ve read that word.)

Fools, simpletons, and traitors ridicule the possibility of war and suggest such talk is divisive, dangerous, and destructive to a happy, cooperative, and safe society. They are wrong. China entered the 21st century as a benevolent giant trying to get along with everyone, so we are told. China makes its own people get along—or else.

China has been hesitant to be more aggressive with America because she is winning and doesn’t see a reason to hit the release button yet.

Scholars tell us that there has always been a China as long as man has “walked upright.” Extremely resilient, the Chinese survived centuries of numerous kingdoms, dynasties, warlords, military incursions, civil wars, floods, typhoons, and earthquakes. For example, the deadliest earthquake on record in 1556, in Shaanxi, China, killed 830,000 people and caused up to 66-feet-deep crevices. A 520-mile wide area was destroyed.

Millions of uneducated Chinese survived the climate catastrophes, internecine struggles, local warlords, and external attacks by developing small-scale industries. They produced silk, paper, gunpowder, and cotton that was traded for food while others farmed, trading food for shoes, tools, and other necessary items.

Millions were not successful in survival, thus making China a massive sepulcher.

China has attacked, absorbed, or acquired smaller groups and some massive groups of people and now shares international borders with 14 sovereign states such as India, Mongolia, Afghanistan, North Korea, Russia, Pakistan, etc. Over 1500 years, the reclusive nation built a 13,000-mile wall to protect it from foreign infiltration along its northern border from nomadic Mongolian tribes on horseback. Walls are known to stop cavalry attacks as well as most illegal immigrants. Additionally, the wall helped keep the natives down on the farm.

China’s first dynasty started in 2100 B.C., and the last dynasty ended in 1912, becoming the Republic of China. After many years of civil unrest and rebellion followed by WW II, the People’s Republic of China was birthed in 1949 after a bloody multi-year struggle with freedom-loving nationalists.

Chairman Mao Zedong led the CCP with an iron fist, and Chiang Kai-shek, leader of the opposing Nationalist Party, challenged the Chinese people for their loyalty. Chiang was born into a devoted Buddhist family but trusted Christ and was baptized in a Methodist Church in 1930. Finally, when Mao took control of the bleeding nation, Chiang absconded with about 2,000,000 followers (and the treasury) to the island of Formosa (now Taiwan) and established a Provisional Government.

Since then, China considers Taiwan a part of China, but Taiwan considers itself a sovereign nation. Even some U.S. “friends” refuse to call Taiwan a nation because it angers mainland China’s Communist tyrants. Nevertheless, America has promised to support Taiwan, and therein are the sprouting seeds of WW III.

Following WW II and the bloody struggle with the Nationalists, even a thuggish Communist like Mao knew the new nation was in trouble, so he kicked off the Great Leap Forward, hoping to change the rural agricultural society into an industrial one. His first mistake (other than taking the Communist oath) was to force simple farmers to set up “backyard steel furnaces” and meet strict production quotas; however, their steel production was a farce, failure, and fatal. The backyard steel was so brittle that it was useless.

Sure, it was stupid but remember, Mao was a Communist. The Great Leap Forward became a disastrous Fallback into Famine, resulting in the deaths of 56 million Chinese. Three million were suicides.

Chinese Communism differs from the old Soviet Communism, with the Chinese model adjusted from Marx to create state-controlled capitalism. Mao decided Marx was wrong because some capitalism (if controlled by the state) would be desirable. It might help the peasants think they are free even though the CCP owns a piece of everything. Chinese officials believe the “fat of the land” should be shared with the state. At one time, the power of the state was wielded behind the scenes; now, “the power would also be exercised explicitly.”

The CCP leaders admit the cooperative effort of the state with individuals is working. Everyone is happy, except those struggling to survive in the very rural hinterland. However, the residents of Hong Kong, Christians in the underground church, and assorted dissents are not thrilled with the repression of the CCP.

According to the Black Book of Communism, Communist policies in China have killed more than 65 million of its own people since its beginning in 1949. Plus, millions more died in its civil war, the Korean War, and in Tibet. Moreover, in recent years, China has harvested the organs of thousands of its prisoners, proving China is a horrific house of horrors.

China used to be our friend. Now, it is our enemy, along with Iran, Cuba, Russia, etc. The Soviet Union maneuvered China into its Communist orbit with the help of American traitors in our government in the 1940s. It is noteworthy that Senator Joseph McCarthy was not the first U.S. politician to warn about spies and the loss of China. A young Congressman from Massachusetts raised his voice a year before McCarthy.

The young Congressman sounded a clear, correct, and courageous voice because of the tragic loss of China. He placed a significant part of the blame on “a sick Roosevelt,” General George Marshall, and “our diplomats and their advisors, the Lattimores and the Fairbanks.” He concluded, “This is the tragic story of China whose freedom we once fought to preserve. What our young men had saved, our diplomats and our President have frittered away.” That Congressman was John F. Kennedy.

Kennedy was right and wrong. He was right that FDR was sick, but he was also soft on Communism and had Soviet agents whispering in his ear what they had heard from Stalin’s henchmen.

John Stewart Service was a U.S. diplomat stationed in Chungking, China, during the 1940s and lived with two Soviet agents. The song they constantly sang to the U.S. State Department was “we can’t trust the Conservative and Christian Chiang Kai-shek’s Nationalist Government, but we can trust Chairman Mao to do the best for China and the U.S.”

At the Cairo Conference on November 22-26, 1943, the tragic decision was made to follow Roosevelt’s demand that Chiang Kai-shek put Chinese Communists into his Nationalist Government! That’s worse than putting a fox in the henhouse. Changing metaphors, it’s worse than putting a homosexual pedophile in charge of a boys’ boarding school.

Compromised, corrupt, and cowardly U.S. diplomates convinced high Washington officials to withhold promised gold shipments to Chiang that would have supported his freedom fight. That treason permitted the Communists to get control of China. The traitors in high places kept aid from Chiang, assuring his defeat. When the Secretary of the Treasury, Henry Morgenthau, asked why Chiang wasn’t getting U.S. aid, he discovered it was because of a Soviet spy in the Treasury Department. Harry Dexter White was a significant player in the U. S. Treasury. White was considered the highest placed asset the Soviets possessed in the American government. Unfortunately, he died before meeting the hangman. However, he is paying for his treason at this moment!

Another Communist agent, Lauchlin Currie, a key advisor to President Roosevelt, worked hand in glove with White for the Soviets against freedom and was unalterably opposed to an American agreement with Japan in December 1941. Disloyal Americans hoped for a Japanese attack upon America, which happened on the 7th. This war in Asia was a significant boost to the Soviets, primarily assuring that Soviet troops in Siberia would not be bothered by Japanese troops since they would be engaged in fighting the Allies.

The despicable termites Currie (who emigrated in 1950 to Colombia and renounced his American citizenship), White (died before his trial), Hiss (spent a few years in prison), and others were busy doing their destructive work to help the Soviet masters and hinder freedom. The FBI sent President Truman a report of White’s espionage activities on December 4, 1945, with copies to Attorney General Thomas Clark. The FBI reported a “substantial spy ring” operating in the government involving White. Well, that should clear out one nest of termites, but no, on January 23, 1946, President Truman announced White’s appointment to head the International Monetary Fund!

No, all Democrats are not spies or senile. Most are simply stupid.

China fell to Communism because of Soviet agents in the U.S. State Department. Consequently, Chiang relocated his Nationalist Government, air force, navy, and the government‘s gold to Taiwan about 70 miles from mainland China.

One and a half billion people live under Chinese Communism today because the U.S. government failed to deal with spies in high leadership positions. It is the reason there is a “two China” policy where the Peoples’ Republic of China controls the mainland and the Republic of China located in Taiwan claims to be an independent nation. Mainland China considers Taiwan part of China. With only 24 million population, Taiwan is like a minnow about to be swallowed by a giant shark.

If the CCP received the nod, they would destroy Taiwan or the U.S. with nuclear bombs or, more likely, with an EMP weapon whereby our cities would be unscathed but literally forced back into the 1800s. That means no cell phones, no computers, no heat or air, no elevators, and probably no modern automobile would function. Forbes reported, “China now has super-EMP weapons, knows how to protect itself against an EMP attack, and has developed protocols to conduct a first-strike attack, even as they deny they would ever do so.”

Communist agents in our government were very successful in turning China over to Communism’s orbit, damning the lives of millions of unfortunate souls, and setting the stage for the final drama facing the free world. It could happen tomorrow and kick off WW III.

China’s war against America has already started; however, the bombs have not been released— yet.

The post China Has Declared War on America – So Where’s the Appropriate Response? appeared first on DailySurge.