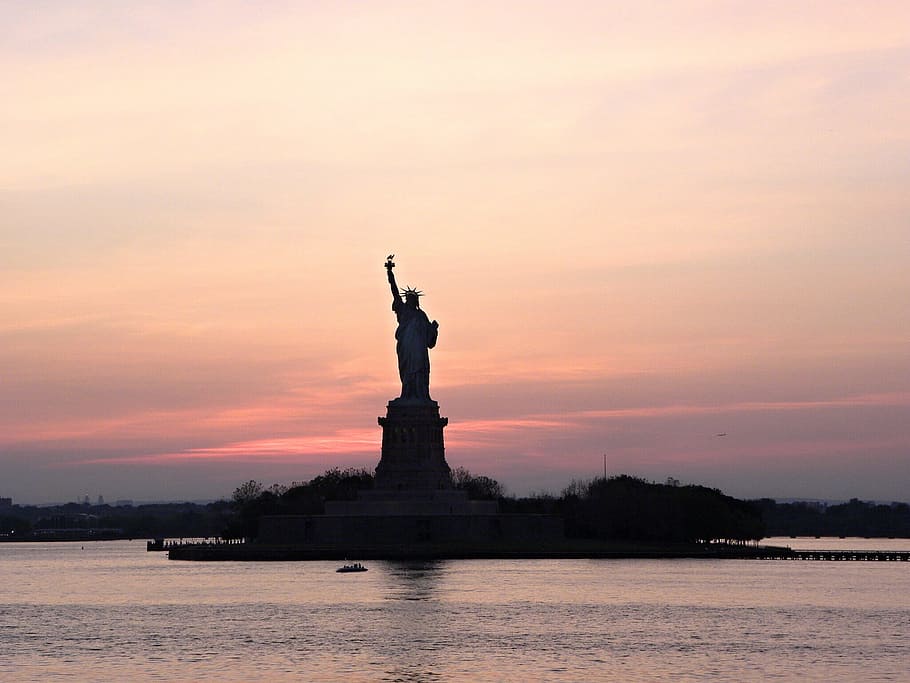 Surge Summary: So many American leftists will never be convinced there is much to admire in their nation because they are ingrates. No matter what, the finer qualities of the U.S.A and its history are ignored and/or rejected and/or taken for granted by these people.

It’s no secret that America’s leftists wake up perpetually sour and ready to whine. They manage to find a dark lining in every silver cloud.

What especially incenses them is anything that reminds their countrymen of just how exceptional this nation is.

Still, when the Washington Post devoted its July 4th Arts & Style front page to an attack on the Statue of Liberty, it seemed like a Babylon Bee caricature of the complaining Left.

The occasion for the screed by Philip Kennicott was France’s plan to install a nine-foot-tall bronze reproduction of Lady Liberty at the French ambassador’s residence in Washington, D.C.

As for the 151-foot version in New York Harbor, Mr. Kennicott finds this “preeminent symbol of the melting pot, proof of this country’s charitable nature, its warm invitation to the world and its social mobility” to be a sham.  Sure, the statue is iconic to “some Americans,” he says. Still, it is “just as meaningless or foreign to others, a sign without significance, or worse, a symbol of hypocrisy or unfulfilled promises.”

Right. This is not the Garden of Eden before the Fall and never will be. Besides, that was heteronormative, which would infuriate our cultural elites.

In any case, failure at achieving perfection is offered repeatedly as a premise to sweep away the old order and anything viewed as natural. This means leftists will never, ever be happy no matter what we do. To them, America is a wretched place where progress gets no traction. To put it another way, it’s 1619 all over again, when the first slaves arrived and it isn’t much better.

We’re all supposed to buy into Critical Race Theory – the idea that America cannot make any progress because it was founded to enable slavery, is still systemically racist and is unfortunately full of white people who are evil by nature.  That’s pretty much what the teachers’ unions – the National Education Association and the American Federation of Teachers – endorse by their actions, despite denials.  They also enthusiastically embrace the full LGBTQ agenda for schools.

Given that these lunatic unions combined represent about three million teachers and other educators, their clout poses a problem for parents, even those who insist that “our schools are okay.” It’s summer right now, so perhaps many parents can find alternative schools for their children this fall or figure out homeschooling. At the least, they might want to stage an open revolt like the outraged parents in Loudoun County, Virginia, who are busy recalling six radical school board members.

Anyway, getting back to the Post, this once-great paper has become so hopelessly “woke” and whiney that even the Bee’s superb writers may find it impossible to satirize.

On July 8, the Post ran a cartoon on its editorial page lampooning Olympic Games officials. Three men in togas are standing over the words “antiquated and biased rules,” while a figure representing “modern athletes” races by. The speedy runner appears to be female, but who knows? Since the Olympics is struggling with the spectacle of men who identify as women competing in women’s events, the cartoon’s meaning seems clear: Gender distinctions in and of themselves are a vestige of bigotry.

But wait. What about human/animal distinctions? If a man thinks he’s a horse, should he be able to compete on foot in the Kentucky Derby? Not that he’d beat any real equines. But that shouldn’t be an issue in an era when meritocracy of any kind is under attack.

Delving deeper into Mr. Kennicott’s article about the nefarious Statue of Liberty, we find that the writer first took a dislike to the lady after hearing a speech by Ronald Reagan celebrating its renovation in 1986.

“Only days before,” the writer recalls, the U.S. Supreme Court upheld sodomy laws, a ruling that he found particularly loathsome because it was “based on ‘millennia of moral teaching.’” How gauche. Clearly, America will not be right until it becomes more like Sodom and Gomorrah, where free spirits reigned supreme.

One company that has seen the light and moved to be more “inclusive” is Disney. For decades, the fireworks at Disneyland and Walt Disney World were preceded by a welcome to “ladies and gentlemen, boys and girls, and dreamers of all ages.” Someone apparently complained that this was too narrow since there are 70 or so genders. So, they cut it down to “dreamers of all ages.”

Since the 1950s, millions upon millions of mom-and-dad families have poured zillions into Disney’s coffers. But they don’t count. The only ones who count are the ingrates who find something wrong with everything. If there’s nothing wrong, they make it up.

Mr. Kennicott’s Statue of Liberty article ends on such a note. He says he went to lower Manhattan but declined to go out to Liberty Island because “that’s for tourists” (unlike keen social analysts such as he). Then he complained that from his vantage point, far, far away, “the statue had never looked so small,” as if it were “sized not for America but a residential garden.”

Let’s recap: He deliberately stays far away and then observes that the statue looks small.

Bugs Bunny had a word for these kinds of folks – “maroons” (a variation on “morons”).

The post Yuck: America Full of Ingrates, Whiners that Will Never Appreciate Their Nation appeared first on DailySurge.