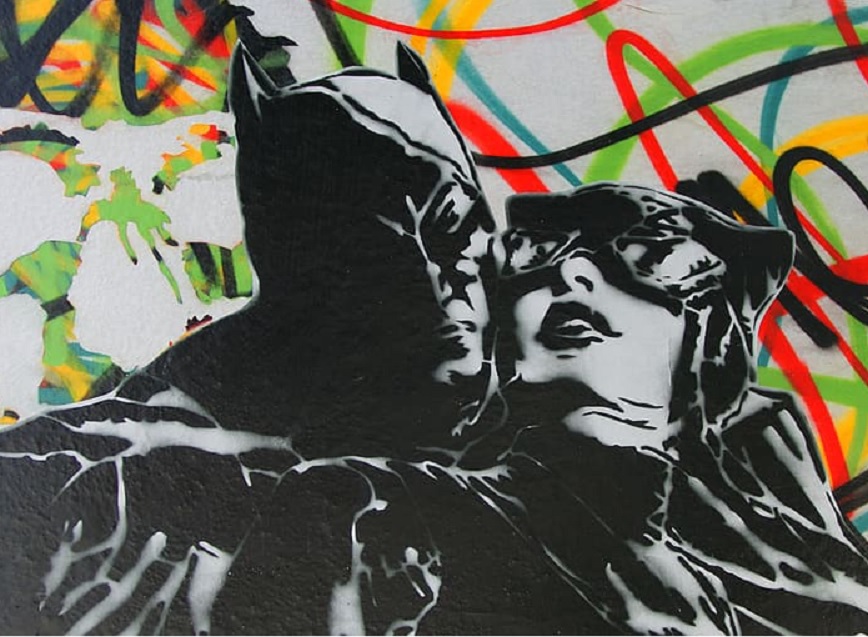 If during these past few weeks you’ve lost sleep over the roiling Batman/Catwoman controversy, don’t feel lonely — apparently there’s a veritable battalion of fanboys/girls caught up in this blip of pop culture turbulence.

The situation lends new depth to the category “adult animated series”: Viewers are protesting the decision of the DC Universe streaming service to scotch a planned segment portraying the Caped Crusader performing a particular sex act upon the feline-named anti-heroine.

Variety published an interview with Justin Halpern and Patrick Schumacker, two of the co-creators and executive producers of … Harley Quinn … [T]he duo revealed that a sex scene between Batman and Catwoman proposed to appear in Season 3 had been nixed by DC.

[W]e had a moment where Batman was going down on Catwoman. And DC was like, “You can’t do that. You absolutely cannot do that.” … “Heroes don’t do that. … [W]e sell consumer toys for heroes. It’s hard to sell a toy if Batman is also going down on someone.”

Actor Val Kilmer, who played the eponymous title character in 1995’s Batman Forever, weighed in with a mildly suggestive tweet: “Does he or doesn’t he…?”

Batman v. Superman director Zack Snyder went salaciously farther, “publishing a NSFW image” of the super couple on Twitter. His caption? “Canon” (that’s geek-speak for: Yes, he did it.)

Not a few observers are perplexed by the whole rumpus: It’s not like Harley Quinn has, heretofore, been particularly virginal.  It’s an “adult animated series that has no lack of sexual innuendo”, according to Oddo.

Halpern makes plenty clear the DC Universe’s decision to snip the offending scene was not so much moral as monetary. Surprise! The network thankfully maintains some limits on what it’ll permit to screen. (Nowadays, sensible people need take whatever concessions to decency we can get!) Still, vocal multitudes among the internet’s coitus-consumed cohort found even this corporate stab at basic tastefulness unendurable. (Some jamokes have gone so far as to create a “Let the Bat Eat Cat” petition.)

If this hub-bub strikes readers as obnoxiously stupid that could be because … well, it is. It’s also the very kind of happening that dependably bubbles up when a civilization becomes monomaniacally fixated on all-things-fornicative; on where and how it can finagle its next orgasm.

Sex, sex, sex, sex, sex, sex, sex … the theme hammers the sentient on every front. When that aspect of human behavior is touted inexhaustibly as the cosmic end-all/be-all, why wouldn’t the libidinous inclinations of a storied hero and his dangerous femme fatale snag headlines?

And it ain’t just Batman who’s fallen prey to the twenty-first century’s puerile preoccupation with “gettin’ some”. That mania also provides the only convincing accounting for the NFL’s recent weird decision to release a twitter video proclaiming “Football is gay … lesbian … queer … transgender”; concluding with: “Football is for everyone.”

“For everyone”, they say .. but where’s the professional sports behemoth’s vocalized devotion to “Bible-believing Christian”? Or mention of “devout Roman Catholic”? Do I hear “traditional heteronormative male”? How’s about “cisgender woman”?

Obviously, unrelenting pressure to be “tolerant” and “woke”, plus pious salutes to “civil rights”, played a role in this latest league silliness. But at bottom — oops, another one of those awkward puns — this is about fawning over a certain lifestyle-minority’s preferred flavor of sexual romping.

Men and women who opt for the “missionary position” or coupling that potentially produces offspring are conspicuously MIA in this NFL promo. Those individuals who root for the conventional — dare I say, biblical — definition of marriage? Who insist the genitals they see when they peek in their mirror imply something? There are, similarly, zero specific allusions to these from

the gridiron gurus. Roger Goodell and Co. are marginalizing these audience members. Informing them they don’t matter. At least not much. Not really.

Still unconvinced about the discretion-annihilating capacity of collective sex-saturation? Check out this doozy, courtesy of Great Britain:

A library has apologised after a dildo-wearing man in a rainbow-coloured monkey suit was booked for a children’s reading event. An unnamed actor wore the costume, complete with exposed buttocks, at the Redbridge Libraries Summer Reading Challenge in east London.

Don’t miss this detail: “Footage shows his fake penis flapping around as he danced.”

Mind you, whoever signed off on this fiasco has a handy excuse, cheerfully supplied by the modern zeitgeist: Sex uber alles!  If a male organ, vagina or bodily fluids are involved? All bets, all restraints are off. Sanity goes bye-bye.

Then there’s this June 29 Washington Post column in which Lauren Rowello defends her decision to tote her “elementary-schooler” and “toddler” to a “Pride” parade, complete with phalanxes of “kinksters”. If you’re unclear of the meaning of that LGBTQ argot here’s a clue: One chap was “bare-chested … [with] black suspenders clipped into a leather thong [and he] paused to be spanked playfully by a partner with a flog.” Others, the mother of two reports insouciantly, “danced down the street, laughing together as they twirled their whips and batons, some leading companions by leashes.”

Just another afternoon out with the little ones …

“We don’t talk to our children enough about pursuing sex to fulfill carnal needs that delight and captivate us in the moment,” the self-described “gendervague” writer pruriently and preposterously pontificates. Pardon me: “Don’t talk enough”? Our underage charges can hardly escape the lewd images, motifs and jabber adults unflaggingly heave all around them nowadays.

“I never want my children to worry that exploring any aspect of consensual sex or touch is too taboo,” Rowell elaborates.

Yes … nothing must ever be verboten when it comes to our venereal appetites. So glad this redoubtable culture-warrior finally broached neglected this do-or-die subject …

Ben Shapiro put it well, in no-nonsense terms: “This is child abuse … In a decent society [Child Protection Services] would be on its way after reading this column … headed directly to this person’s house.”

It needn’t be said that won’t happen — because this soaringly irresponsible parent is presenting a viewpoint dripping with S.E.X. It’s, therefore, beyond critique. Inviolable. Practically sacrosanct. Separation of sex and state, y’know.

Meanwhile, the Old and New testaments make clear: physical intimacy — pleasurable physical intimacy! (Prov 5:9) — between husband and wife was God’s idea (Gen 2:24). He came up with the notion, introduced it into the civilizational conversation a long time ago. It has its God-ordained time and God-heralded place.

What it is decidedly not intended to become? The primary purpose of our time on terra firma; the overmastering goal of all we are and do. Getting a little “nookie” should never ascend to the controlling focus of a person’s existence.

Real-life sexual experiences, carried out the righteous way, can be undeniably lovely, even wonderful (Prov 30: 18-19). That said — and notwithstanding the delusional expectations generated by America’s pornographic culture — the fact remains: non-fictional sex generally doesn’t quite measure up to the absurd fantasies that’ve been peddled non-stop for at least two or three generations. It certainly isn’t worth being crowned the summum bonum of living.

Don’t let all-encompassing hankering for carnal knowledge distract you from other vital life-stuff: accomplishments to be achieved, talents to be developed, non-coital friendships to be pursued, sacrifices made, children raised, a Creator sought.

Batman surely would add: crime to be busted and, occasionally, a world to be saved. And it’s doubtful he’d place a salacious moment with a cat-like floozy at the top of his priority list.