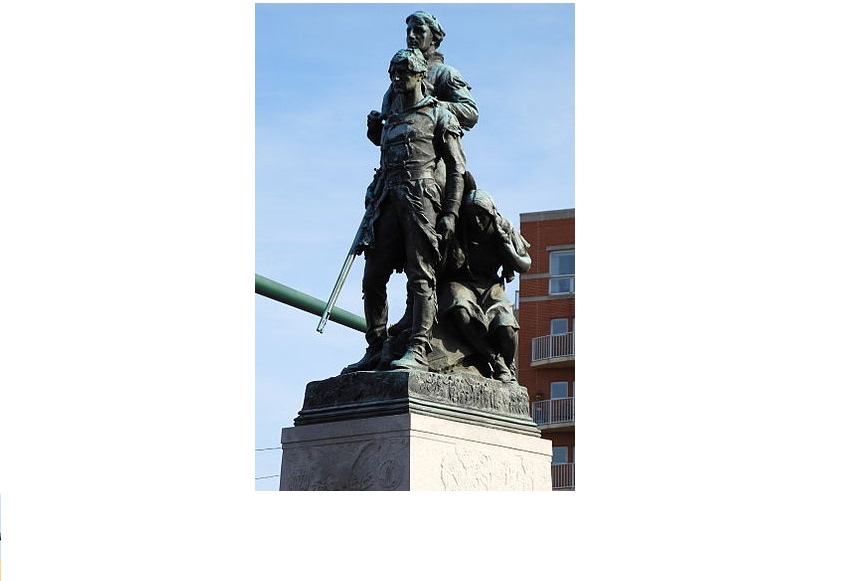 Surge Summary: The distortion and effacement of America’s history, represented by the dangerous trend of removing memorials and statues across the land, is the result of the nation’s abandonment of its recognition of God.

When President Thomas Jefferson (1743–1826) was sworn in on Wednesday, March 4, 1801, most of the U.S. population lived within 50 miles of the Atlantic Ocean. Prior to 1801, the huge parcel of land in North America lying between the nearly three-quarters of a million-plus square miles of land between the Mississippi River and the Rocky Mountains was up for grabs.

Following a land deal in 1803 between France and the United States known as the Louisiana Purchase, Jefferson acquired approximately 827,000 square miles of land west of the Mississippi River for $15 million.

In 1804, Meriwether Lewis (1774-1809) and William Clark (1770-1838) were commissioned to explore and map the newly acquired territory, find a practical route across the western half of the continent, establish trade with—and sovereignty over—the natives near the Missouri River, and establish American presence before European powers made claims for the region.

“The contestants were the British coming out of Canada, the Spanish coming up from Texas and California, the French coming up from the Mississippi-Missouri from New Orleans, the Russians coming down from the northwest, and the Americans coming from the east,” wrote Stephen Ambrose in his 1996 biography of Meriwether Lewis. “And, of course,” he added, “there were already inhabitants who possessed the land and were determined to hold on to it.”

Those “determined to hold on to it,” in many cases, were the hostile native American tribes living across the wide swath and expanse of Louisiana territory.

Sacagawea was the only female among the 31 male members of the Lewis and Clark Expedition. Married to a French-Canadian explorer and trader, Toussaint Charbonneau, the 16-year-old bilingual Lemhi Shoshone proved invaluable to the journey, not only as an interpreter, but also due to her remarkable skill in finding edible plants. Her greatest contribution altogether came from the presence of her infant son strapped to her back, which helped assure the different tribes that the explorers had peaceful intentions.

Charbonneau, Sacagawea and their son left the expedition in 1806 with a parting gift of the blacksmith tools, a $533 bonus and a land warrant of 320 acres in Missouri. The place and date of Sacagawea’s death is unclear. The most accepted and the one that most historians support is 1812 as the date of her death. Others, relying on American Indian oral tradition believe that she died in 1884 in Shoshone lands.

In the contrived spirit of reclamation, reparation and redemption, Charlottesville Mayor Nikuyah Walker pontificated, “Taking down this statue [Robert E. Lee] is one small step closer to the goal of helping Charlottesville, Virginia and America grapple with the sin of being willing to destroy Black people for economic gain.”

However sanctimoniously pharisaical the Charlottesville iconoclasm may have been, Walker was right on one point, that slavery—owning people as property—is sinful.

The Meriwether Lewis, William Clark and Sacagawea monument was made by Charles Keck (1875-1951), an early 20th-century notable sculptor. His architectural works, monuments and memorials remain prominently displayed throughout America, including in Charlottesville, where Keck honored Sacagawea as being the only woman on the historic Lewis and Clark Expedition.

The front face of the pink granite base of the monument includes the following inscription: “Bold and farseeing pathfinders who carried the flag of the young republic to the western ocean and revealed an unknown empire to the uses of mankind.”

The monument was gifted to the city of Charlottesville by Paul Goodloe McIntire (1860-1952), a stockbroker, investor and philanthropist from Virginia. In a letter to his trustee, W.O. Watson, McIntire wrote: “The Sculptor Keck has changed the Clark statue by the addition of a third figure, the Indian girl [Sacajawea] and also around the base of the bronze on the frieze an Indian buffalo hunt and Indian council. … the statue is greatly improved. The contract called for two figures: the sculptor threw in the Indian, and she is the best of the lot!”

The monument was a great success. The dedication ceremony took place on Nov. 21, 1919. Paul McIntire’s own daughter, Charlotte Virginia, unveiled the monument in front of a large crowd of observers and a group of schoolchildren singing “America the Beautiful.”

Walker failed to specify the nature of Charles Keck’s or Sacagawea’s sin. Instead of applauding the monument for inclusivity and female empowerment, Native American expressionist painter Rose Ann Abrahamson attempted to disparage it as “a very offensive statue, and not only did it delineate me as a Native American, it delineated our women and their role in society.”

Ms. Abrahamson would do well to check the National Women’s History Museum’s page on Sacagawea. Located in Alexandria, Virginia, the museum delineates itself as “an American history organization that researches, collects and exhibits the contributions of women to the social, cultural, economic and political life of our nation in a context of world history.” The museum portrays Sacagawea in highly positive terms, such as “critical to; great help; crucial; skilled; valuable; her presence signified peace and trustworthiness; showing bravery and clear thinking that earned praise and gratitude; staying calm; respected.”

Abrahamson’s aspersion reminds of former Speaker Sam Rayburn’s (1882-1961) adage. Representing the Texas 4th Congressional District as a Democrat from 1913 to 1961, the 24-term congressman scoffed, “Any [expletive] can kick down a barn, but it takes a good carpenter to build one.”

Before long there will be no monuments, memorials or United States history left in America, as textbooks will have to be canceled as well.

Commenting on France’s President Emmanuel Macron’s opposition to those seeking to cleanse France of its history, Mark Steyn said: “President Macron of France is not my favorite chap—he’s a sinister globalist, for one thing. But he made an admirable stand when he announced that not one French statue would be taken down and not a single French street name would be changed, because they are all part of French history. And ‘Bingo!’ … the statue toppling and street-name changing in France went away.”

If only America had such valiant and judicious political leaders.

Regarding the magnitude and extent to which contemporary America has transgressed from the founders’ conception of freedom, we refer to America’s second president, John Adams, and his advice to the Massachusetts Militia on Oct. 11, 1798.

“We have no government armed with Power capable of contending with human Passions unbridled by morality and Religion. Avarice, Ambition, Revenge or Gallantry would break the strongest Cords of our Constitution as a Whale goes through a Net. Our Constitution is designed only for a moral and religious People. It is wholly inadequate for any other.”

Modern America has gone morally and religiously rogue under the influence of religious secularism.

The precarious situation our nation finds itself in will become clear by simply comparing Founder John Adams’ late 18th-century counsel to the modernistic promotion of atheists and agnostics installed over the last 100 years as Supreme Court justices. It is the dire situation where the ministry of civil government as the guardians and interpreters of the U.S. Constitution, “designed only for a moral and religious people,” is turned over to those in rebellion against God.

May God help us!