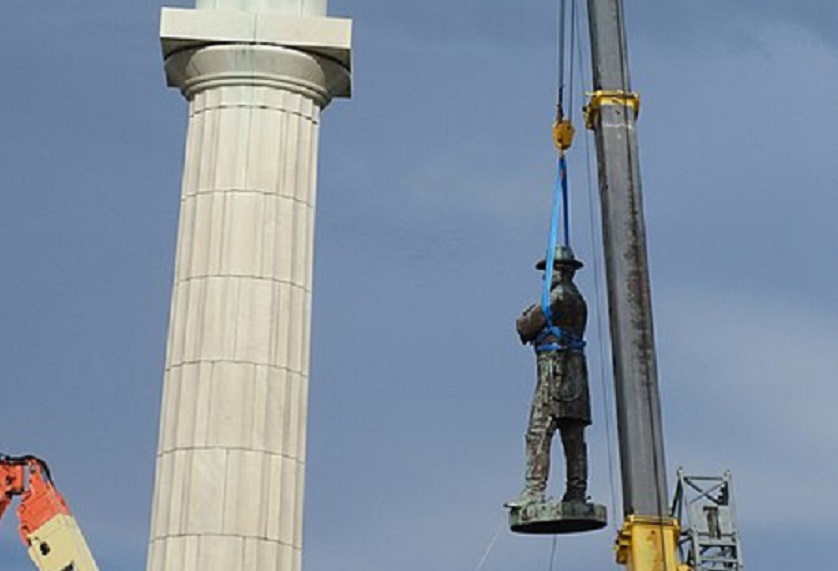 Surge Summary: Why is it that so many Leftists want to remove historic vestiges of Confederate figures, but continue to remain silent about the honors heaped on the late Senator Robert Byrd who was deeply involved in the Ku Klux Klan in his earlier career? It is hypocrisy of the rankest kind.

Wise men have said if we don’t learn from history, we are doomed to repeat it; however, if history is twisted like a pretzel by progressives, a confused generation will accept fables as facts. That is not accidental but planned and pernicious.

George Orwell warned, “The most effective way to destroy a people is to deny and obliterate their own understanding of history.” That has been happening since the zealots, pretending to be sensitive about imperfect people, started removing portraits and statues of historical persons.

The anti-historical fanatics are tearing out the guts of this nation. They finally succeeded in removing the statues of Robert E. Lee and Stonewall Jackson from their place of honor in Charlottesville. These history-hating hypocrites pretend to be so superior; however, those twits don’t qualify to wash and polish the bronze statues of those two principled men or shine their boots while alive.

Charlottesville Mayor Nikuyah said the removal was “one small step forward” in dismantling White supremacy and reckoning with their past. The comatose mayor doesn’t know that we dealt with our past with something called the Civil War, resulting in the removal of slavery. More Americans died in that war than in WW I, WW II, the Korean War, the Vietnam War, and the recent wars in the Middle East—combined!

Removing Confederate statues, rewriting history, and denigrating everything southern, misnamed “progressives” are whitewashing our history as we turn away from the inconvenient truths of our past.

I suggest the black zealots and black mayors be handed a copy of CliffsNotes or SparkNotes as a quick introduction to that war. Or, someone might read them the text since there are few pictures.

General Lee was one of the most talented, gracious, and conscientious men of the day. Before freeing his wife’s slaves and preparing them for freedom, General Lee’s wife taught the slaves to read and write and the women how to sew. Most Americans don’t know it was illegal to educate blacks in most of the south. This was especially true after the summer of 1831, following the massacre of 55 white men, women, and children led by Nat Turner, a slave and professed Baptist preacher—in reality, a religious nut. Many states made slave education illegal. Mrs. Lee refused to obey that law.

Following his surrender, Lee refused many lucrative job offers and, in 1865, accepted a small salary as president of Washington College (later Washington and Lee University) located in Lexington. One of their professors and other racial jerks want to remove Lee’s name from that institution because he was a “traitor.” Washington and Lee Professor James Casey (a self-hating white dude), said, “[Lee] betrayed that oath to the Constitution of the United States for one reason and one reason only, to protect the institution of slavery.”

Only a racist or a poorly trained person says the original and foremost reason for the Civil War was slavery. The professor had also said, “something is wrong with white folk.” His false claim about the war being fought over slavery became popular when it became politically expedient to do so after the south exploded over collection of taxes on imports at the Charleston port.

The civil war happened because two contending parties—the North and the South—disagreed on who would collect taxes on imported items at the ports of entry, specifically at Fort Sumter off the coast of Charleston, South Carolina. However, a war over taxes doesn’t sizzle but fighting to free slaves will cause men to march to their deaths. So, the South wanted independence, not the protection of slavery, and the North wanted an intact Union, not the abolition of slavery. And with an intact Union, the feds could continue to charge 40% tax, not the 10% South Carolina charged.

Southern leaders correctly asserted they had a legal and moral right to secede from the Union. In fact, New York, Virginia, and Rhode Island made joining the Union contingent on being able to leave. No colony would have agreed to be part of the Union if they did not have the right to return to their independent status.

In 1855, soon to be famous Thomas (Stonewall) Jackson broke the law every Sunday morning when he taught a Sunday school class of Blacks at the Lexington Presbyterian Church. He was also careful that even during the war, his tithe was sent to his church.

Compare Lee and Jackson with Senator Robert Byrd, a lifetime Democrat and an organizer in the 1940s of a chapter of the KKK in West Virginia. He wrote in the early 1949s, “The Klan is needed today as never before, and I am anxious to see its rebirth here in West Virginia and in every state in the nation.”

Byrd wrote to Senator Theodore Bibo in 1944, declaring, “I shall never fight in the armed forces with a negro by my side… Rather I should die a thousand times, and see Old Glory trampled in the dirt never to rise again than to see this beloved land of ours become degraded by race mongrels, a throwback to the blackest specimen from the wilds.”

Senator Byrd was a member and the founder of that chapter and was elected Exalted Cyclops unanimously. While he repudiated the Klan in later years (after he was an established Washington insider), he and the Democrat Party vehemently opposed the Civil Rights Act of 1964 for 57 days! Senator Byrd filibustered for 14 hours against the legislation, yet Democrats still call him “the conscience of the Senate.” He was a typical politician—a bag of stale wind.

You see, that was when Democrats believed in and used the filibuster; however, today, the Democrats don’t believe in it when it is advantageous to the Republicans.

Did I mention that Democrats are certified hypocrites? They have a well-earned Ph.D., Doctor in Hypocritical Pomposity.

Now, since the very sensitive progressives want to correct all wrongs of the past and live in a pure society without offensive proslavery statues, why have they left Senator Byrd untouched. His busts and photos in Washington have not been removed. Is there a crusade in West Virginia to change the numerous streets, parks, and schools that bear his name? If not, why not?

Would my critics not be too hard on me if I suggest that Democrats are the sleaziest, most despicable hypocrites ever? They do irreparable damage to truth and present and future generations by manipulating historical reality.

Tyrants have always preferred fiction over facts and write history to please themselves. I revealed in my book The God Haters an example of politicians manipulating history when Caesar tried to obliterate the memory of Pilate because he had offended Caesar. Pilate, therefore, did not exist since Caesar said so, and officials and historians willingly obeyed by removing Pilate’s name from all records.

Mark Antony had a similar experience with his memory being formally expunged from Rome’s official records after his affair with Cleopatra. Antony and Cleopatra agreed to commit suicide, and Antony stabbed himself with a sword and died in Cleopatra’s arms. She then killed herself with the bite from a poisonous serpent.

Antony had antagonized Cicero, and the powers that be, so his name was removed from the history books. “His name was obliterated from the…state registers of official events. His statues were removed. It was to be as if he had never existed. The Senate …voted that no member of the Antonius clan should be named Marcus….His birthday was made …an unlucky day, on which public business could not be conducted.”

However, that was not Cicero’s opinion when he wrote in 80 B.C., “The first law is that the historian shall never dare to set down what is false; the second, that he shall never dare to conceal the truth; the third, that there shall be no suspicion in his work of either favoritism or prejudice.” Antony was a toddler at the time and many years later, Cicero did the opposite to punish Antony. Such was politics along the Tiber—as well as the Potomac. The same has been true for more decades along the Moskva and Volga Rivers in Russia.

Soviet despot Joseph Stalin sent fellow Communist Leon Trotsky into exile and airbrushed him out of the Great Soviet Encyclopedia; then to finish the matter, assassinated him in Mexico. For decades, when a Soviet official fell out of favor with the sitting Soviet tyrant, the offender was painted out of the official photos of the most recent May Day Parade in Moscow.

There is no end to such catastrophic and wretched activities of little men using their temporary authority to strike back at their real or perceived enemies. Officials with little minds, guilty consciences, enlarged egos, and gobs of personal insecurity will always use their power to accentuate their positives and modulate their negatives.

However, the past is always with us. Sane, secure, and stable leaders will not rewrite history for political, personal, or pecuniary reasons; but we can count on the misfits, malcontents, and malefactors to distort history.

I suggest today’s lowlife rabble-rousers stop desecrating and removing historical heroes and patriots or be consistent (for a change) and destroy every vestige of Senator Robert Byrd, former Exalted Cyclops of the Ku Klux Klan.

(Dr. Don Boys is a former member of the Indiana House of Representatives who ran a large Christian school in Indianapolis and wrote columns for USA Today for 8 years. Boys authored 18 books, the most recent being Muslim Invasion: The Fuse is Burning! The eBook is available here with the printed edition (and other titles) at www.cstnews.com. Follow him on Facebook at Don Boys, Ph.D., and visit his blog. Send a request to DBoysphd@aol.com for a free subscription to his articles, and click here to support his work with a donation.)