A senior Biden official at the State Department expressed sadness Friday that the administration was “powerless” to protect women and girls in Afghanistan from the Taliban.

Right now, every single member of the Taliban in Afghanistan is a fervent and enthusiastic Joe Biden supporter. Why? Because Biden’s polices and blundering policymaking have made it possible for the Taliban to not only return to power, but to do it so swiftly that veteran Middle East watchers are dumbfounded.

“When the righteous are in authority, the people rejoice: but when the wicked beareth rule, the people mourn.” Proverbs 29:2 (KJB)

As you read this, and because of the direct decisions by pretend president Joe Biden and his minions, thousands of Afghan women and young girls are about to be assaulted in the most brutal ways possible. As you read this, the United States military cannot guarantee the safety of our fellow citizens now trapped in this hellish scenario that Biden has created. As you read this, the nation of Afghanistan is now on track to return to its former status as terror capital of the world. Something that was not possible when Donald Trump was president.

FROM BREITBART NEWS: Deputy Assistant Secretary in the State Department Bureau of European and Eurasian Affairs Molly Montgomery shared her thoughts on Twitter early Friday morning after reports demonstrated the swiftness of the Taliban takeover of Afghanistan.

“Woke up with a heavy heart, thinking about all the Afghan women and girls I worked with during my time in Kabul,” she wrote on her personal account. “They were the beneficiaries of many of the gains we made, and now they stand to lose everything.”

She appeared to express frustration that the Biden administration was unable to help them.

“We empowered them to lead, and now we are powerless to protect them,” she wrote.

The Twitter post disappeared from the site later in the day, but not before reporters took screenshots of it. 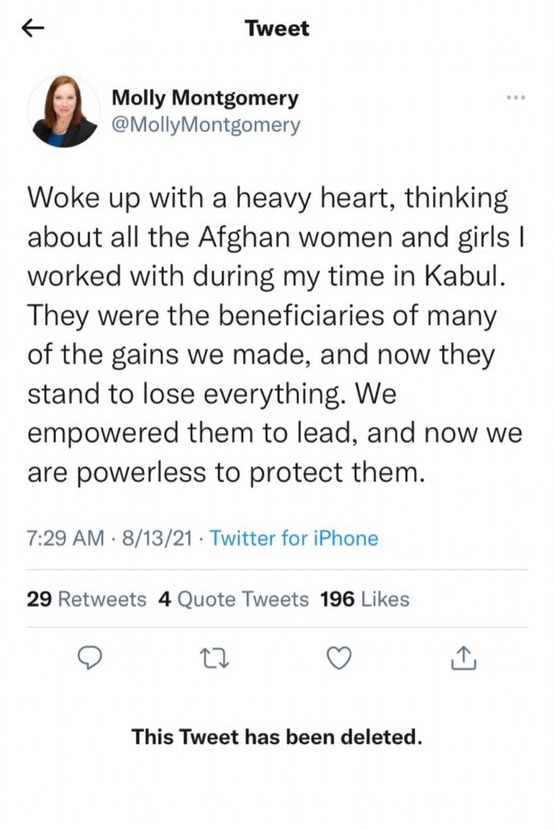 “This deleted tweet from a senior Biden State Department official captures the private feelings of many others,” Axios reporter Jonathan Swan wrote. The sentiment Montgomery voiced opposes the message from the White House, insisting the president has no regrets about his decision to withdraw troops from Afghanistan.

“The President is firmly focused on how we can continue to execute an orderly drawdown and protect our men and women serving in Afghanistan,” White House press secretary Jen Psaki told Fox News. “You heard him earlier this week: he does not regret his decision.”

Biden denied he would bear responsibility for a Taliban takeover of Afghanistan during an interview with CBS News anchor Margaret Brennan during his presidential campaign.

The post Joe Biden Has Placed Afghanistan On Brink Of ‘Humanitarian Catastrophe’ As Taliban Now Rises Nearly Unstoppable In Terrifying Ascent To Power appeared first on Now The End Begins.