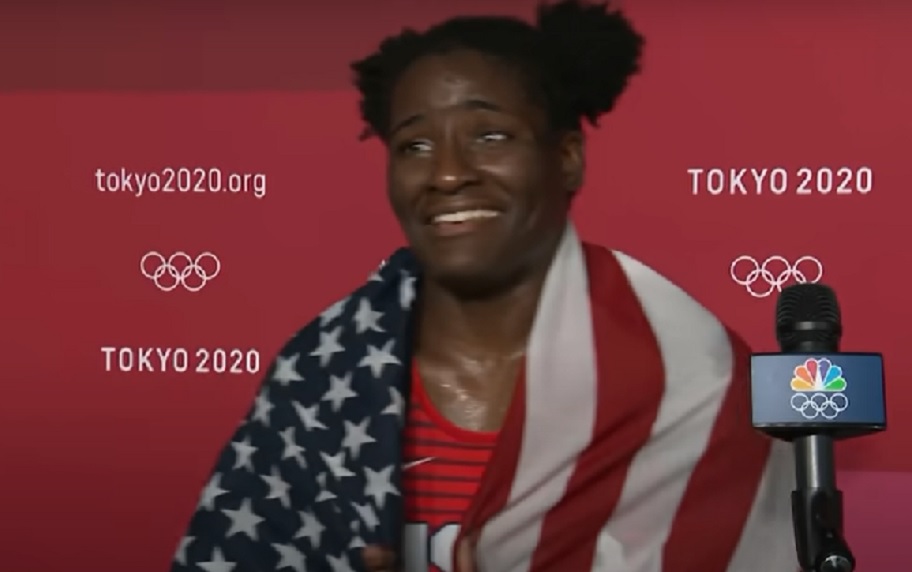 Surge Summary: Two American Olympic competitors react in dramatically different ways during this summer’s competition: one offers a way for U.S. patriots to reject; the other presents an exemplary model, loving God and loving her nation.

When I went for my morning prayer walk, I had a divine appointment with a woman visiting from Indiana. At the conclusion of our time where we hit upon escalating, serious issues of our day, she simply smiled, shrugged her shoulders and said, “It’ll all work out.”

It was kind of like Dorothy in The Wizard of Oz closing her eyes, clicking her heels and effortlessly being whisked back to Kansas safe and sound into the arms of Auntie Em.

I don’t think it works that way.

A while back, I wrote a commentary entitled, “We Are Now in a Second Civil War in America.” Millions of concerned and patriotic Americans are awakening to this reality.

Mark Levin just released his new book, American Marxism, underscoring this point, and in 10 days a half-million copies were sold! He said, “The counter revolution to the American Revolution is in full force. And it can no longer be dismissed or ignored, for it is devouring our society and culture, swirling around our everyday lives, and ubiquitous in our politics, schools, media and entertainment.”

If we snooze, we’ll lose. But we won’t. God is mounting a counteroffensive to halt the radical progressive left’s assault on our faith, freedoms, families and foundational values upon which America was founded.

In the fifth century, the brilliant theologian Augustine wrote his masterpiece, The City of God. He explained how Christians live simultaneously in two worlds—the city of God and the city of man.

In Charles Dickens’ Tale of Two Cities, he described a time when two diametrically opposed worldviews were simultaneously clashing with each other, coming to a boiling point. A man released from an 18-year-long imprisonment experienced escalating tensions amidst dangerous conditions that finally culminated in the French Revolution and the Reign of Terror.

Today the dark is getting darker and the light is getting lighter, but the difference between the two is becoming more and more evident each day. There is no more room for neutrality or fence-sitting.

As I watched the recent Olympics, I sensed a prophetic picture through two athletes of the two opposing alternatives facing Americans.

The first one I have prayed for because she came from a home where her brother was a drug addict and spent years in prison. Her demeanor is that of a broken, mixed-up person, like so many surrounding us in society today. She’s a bitter, self-identifying lesbian with numerous failed relationships who desperately needs Jesus.

Activist athlete Megan Rapinoe is a soccer superstar who symbolizes the goddess of wokedom on a take-no-prisoners mission to disparage America whenever she can: disrespecting our national anthem and flag; imitating Kaepernick’s defiance and arrogance; criticizing our country; aligning with socialists Elizabeth Warren and Alexandria Ocasio-Cortez.

America has afforded her abundant opportunities for fame and fortune (she makes millions sponsored by Nike, P&G, Body Armor, Victoria’s Secret, Hulu, Samsung, Visa … plus she launched a luxury clothing company). Her public persona is sadly that of an ungrateful diva as she whines and demands more money and equal pay for women’s soccer (which only draws small audiences while she repels potential fans by her behavior). Subway made her a promoter recently, but the franchise owners are furious.

Rapinoe revels in her fleeting fame with appearances on fellow lesbian Rachel Maddow’s show, late-night TV and in Showtime’s The L [lesbian] Word: Generation Q [queer]. She’s an outspoken feminist, yet irritates many women and girls by advocating for biological male transgender athletes who usurp female athletes’ chances in competition.

When the United States’ star-studded, social activist women’s soccer team lost in an embarrassing defeat to Canada in this year’s Olympics, was it any surprise that scores were secretly glad? President Trump commented: “Replace the radical wokesters with patriots and start winning again!” Rapinoe is mega talented, yet a vivid example of the radical progressive left obsessed with tearing down traditional America to transform our nation into a failed socialist system.

Perhaps public humiliation on the world stage will move Rapinoe and her squad that played (in their words) “five bad games” to stop all the bad-mouthing of our great country and get back to business.

LeBron James demands the International Olympic Committee change the rules to allow protests on the medal’s platform. Let’s say “Sayonara!” to James and Rapinoe activists, enriching themselves in America while constantly excoriating our nation. Ratings were down 49% from 2016, and the Opening Ceremony had the lowest viewership in 32 years due to protests and COVID.

Watching the Olympics, I, along with countless millions nationwide, witnessed an emotional display from a beautiful Black woman who symbolized everything we treasure in this magnificent country. We found ourselves releasing tears of joy and celebrating with exuberance what many believe to be the best moment of the Tokyo Olympics.

Tamyra Mensah Stock, 28, is the first Black woman to win Olympic wrestling gold. When she completed her match, she exploded in tears and laughter and bounced up and down like a jumping bean! She even embraced and encouraged her Nigerian opponent.

She honored her departed father as she looked heavenward expressing a soft-spoken prayer. “He would be so proud! He would be so happy!” She lovingly honored her husband then said she wanted to honor her mother by giving her the $30,000 money attached to the gold medal so she could purchase a food truck to help others.

In between her infectious laughter and tears, she explained how proud she was that younger girls can look up to her and perhaps follow in her footsteps.

Then this beautiful, beaming ambassador for Christ, who attends a Christian university, said, “It’s by the grace of God I’m able to even move my feet. Like, I just leave it in His hands and I pray … I get better and better ….”

Clutching the American flag that she had wrapped around her shoulders, she expressed love for her country and declared, “It feels amazing. I love representing the US! I love living here! I love it! And I’m so happy I get to represent U-S-A!”

Here’s the Deal: We will not identify with rebellious, ungrateful, lawless, Marxist progressives wanting to tear down America but rather with the swelling ranks of radical patriots like this Olympic champion. She humbly demonstrated faith in God, gratefulness, joy, patriotism, humility, perseverance, hard work, respect for family and appreciation for all God has done for us in America. We will follow her as she follows Christ.