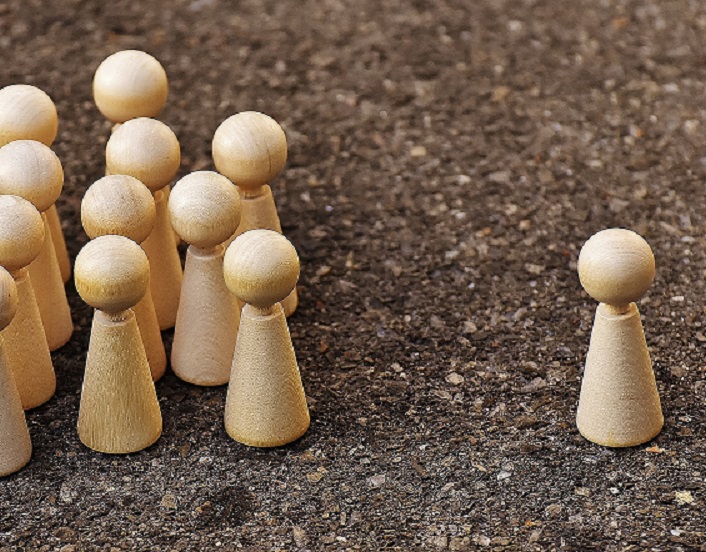 Surge Summary: People like to quote – misquote – certain portions of Scripture in order to support various “woke” concepts and government policies. What the Bible actually teaches can be decidedly inconvenient for such folks.

Back in the 1960s, there was a TV series entitled The Outer Limits.  Broadcast from 1963 to 1965, it was more science fiction based than The Twilight Zone.  When the show would start, there was a voice over narration that said: “There is nothing wrong with your television set. Do not attempt to adjust the picture.  We are controlling transmission.”

Given the current state of affairs, and the current administration, if you just replaced a couple words of this phrase, you’d have our current scenario. I.E.  “There is nothing wrong with your reality.  Do not attempt to adjust your thinking.  We are controlling transmission.”

This attempt at control is to be expected with Democrats/Socialists in charge.  For us as Christians, though, the real wake up call should be what we’re seeing happening within our churches.  COVID has been a real gift to the Democrats and they’ve used it to reach into aspects of our lives that they never have before, such as the church.

Some churches are fighting back and refusing to allow mandates of any kind.  The Global Vision Baptist Church, Mount Juliet, TN, pastored by Rev.  Greg Locke, is one example.  The church I go to, New Life Christian Church and World Outreach, Warsaw, IN, pastored by Rev. John Lowe is another.  Rev. Locke will not allow masks in church.  Rev. Lowe leaves it up to the individual.  In both congregations, you get to make your own choice…not the state.

Standing up to the Democrats tyranny is essential because they will whittle away at our freedoms incrementally given the chance.  (For a great lesson in how this happens, read “Hitler’s Cross: How The Cross Was Used To Promote The Nazi Agenda”, by Erwin W. Lutzer.)

The old saying “the devil’s in the details” is what will be used against us whenever we question their agenda.  And this is when we must counter with some of the more seemingly “inconvenient” verses of scriptural truth.

I’ve heard it said more than once that we MUST allow in millions of unvetted, untested illegals because “Jesus was a refugee once.”  This idea comes from Matthew 2:13-15.  Right after the wise men left after seeing the baby Jesus, Joseph had a dream where an angel of the Lord told him to take Mary and the baby and flee to Egypt and stay there “until I bring thee word”, which meant stay until after King Herod was dead after his killing spree of infant males.

Let’s look at this closely.  The definition of refugee is “a person who flees to a foreign country or power to escape danger of persecution.”  Under the circumstances mentioned in Matthew, the baby Jesus could fit this description.  However, here is the difference.  It was Jesus earthly father Joseph who was told to take his young family and flee.  Joseph was the “refugee”.

But was he really?  Refugees have a tendency to stay once they’ve arrived.  Joseph, Mary and baby Jesus left when the angelic all clear was given.  We don’t know how long they were there, scripture doesn’t say.  But it’s certain they never got a chance to attach themselves to the Egyptian welfare tit, if such a thing existed.

Another portion of scripture that is often used in the immigration discussion is the Parable of the Good Samaritan, Luke 10:30-37.  Most of us probably know this parable by heart.  The Samaritan, while traveling, found a man who was beaten, robbed and left for dead at the side of the road.  He was the only one who stopped to help the man.

Not only did he help by tending to the man’s wounds, he also took him to an inn, paid for him to stay, and told the inn keeper he’d pay for any extra the man owed when he passed that way again.

The usual take-a-ways from this are:  show compassion; get personally involved if you can; involve others; get involved financially; do follow up.

However, make note of what’s not mentioned.  While the Samaritan took the man to a place of safety where he would be cared for and even paid for the services rendered, he did not take the man home.  He left him in the care of a paid professional (for that era.)  He did not take him home, thus potentially endangering himself and others.

The world tries to guilt trip and bully the church into helping those who clearly are law breakers and have far less than a benevolent agenda.  Forced “compassion” that endangers others isn’t compassion.  It’s anarchy.  Yet, the “Christ was a refugee” and the Parable of the Good Samaritan are used to divert our attention away from our core issues.  But to the Democrats, when it comes to illegal immigration, why ruin a good thing by talking about its legality?

How do we respond to the fact that the Great Wuhan Kungflu Overreaction by our government has caused so much job loss, desperation, anxiety, and even suicides?   In normal times, Americans would pull together and help each other as we could.  Now, the Socialists in charge just continue to throw money at every problem.

There are those in the church who say that’s fine, that’s what we should be doing.  According to Matthew 25:32-46, if we help “the least of these”, it’s the same as giving to the Lord Himself. However, that is taking these verses out of context.  They represent and discuss what should be the individual Christian’s response to an individual need.  This is not an endorsement of government largess.  They try turning legitimate needs into guilt trips of “I want…you owe me!”

Compare this to 2nd Thessalonians 3:10:  “This we command you, that if any would not work, neither should he eat.”  Kind of straight forward, wouldn’t you agree?

The background here is that the church at Thessalonica had taken in people who became a drain on their meager resources.  This is how you deal with leeches…don’t feed them.  This passage is also a great indictment against the falsehood that the first century church practiced a form of Socialism.  They only had a communal form of living because of the need for safety against persecution unto death.

As previously stated COVID was a gift to the Dems and it generated the Great Wuhan Kungflu Overreaction.  The cornerstone of this overreaction is fear.  They haven’t let up with the convoluted information, the masking, the lockdowns and now with vaccine passports, they want to take it to yet another level of control.  So what inconvenient truth can the church use to counter the Dems daily dose of insanity?   When it comes to fear, The Word has a lot to say.  Here are just a few examples.

Ps. 91:10 There shall no evil befall thee, neither shall any plague come nigh they dwelling.

Ps.23:4 Though I walk through the valley of the shadow of death, I shall fear no evil

Ps. 56:4 In God I will praise his word, in God I will put my trust; I will not fear what flesh can do unto me

Rom. 8:15 For we have not received the spirit of bondage again to fear

Heb. 13:6 …we may bodily say, the Lord is my helper and I will not fear what men can do unto me

This is of course just a small sample of what scripture says regarding the topic of fear and how we as Christians are to confront it.  I would recommend getting a good Concordance and checking out all the variations of the word fear.  It’s amazing.

The church doesn’t have to be silent or even afraid to stand up to what the Democrats are doing and want to continue to do.  In reality, we have more power than they have.  Let’s start to use it.

Because of the wealth of Biblical inconvenient truths, I’ve decided to make this a two-part article.  So until next month, not only continue to stay informed, but pray as well that we have the wisdom and courage to do what’s right and what needs to be done.  Thanks for your indulgence.

Along with some very good reviews that my new CD Salt 2: Trophy Hunting For Unicorns has received, our YouTube page continues to get more and more views.  And, we’ll continue to add new videos on a weekly basis.  Please check out the following: SALT-John DeGroff and Friends – YouTube

Image: Adapted from:Here and now, unfortunately, ends my journey on Pixabay from Pixabay

The post Biblical Truths That Are Inconvenient for the ‘Woke’, Part 1 appeared first on DailySurge.