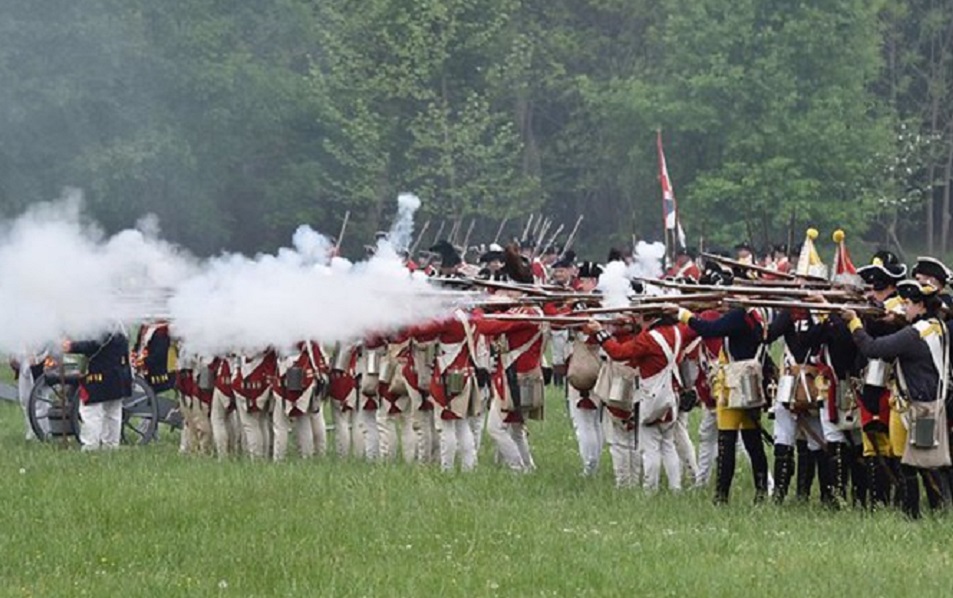 Surge Summary: Contrary to what some confused historians claim, the colonists “War for Independence” was actually more of a war of self-defense against a mother country – Great Britain – which was threatening its very existence.

Many sincere Christians have confused, conflicting, and convoluted notions about what became the War for Independence or, as some call it, the Revolutionary War. However, it was not a revolution but a war of self-defense, and that fact is seldom discussed in America’s classrooms. When the pertinent facts are known, Americans will have no embarrassment over our “rebel” past.

The Stamp Act of 1765 was a power grab by King George III whereby various publications and legal forms in America would require a stamp (tax) before they could be issued. The colonialists resented the act as being taxation without representation. That same year Virginia’s Patrick Henry weighed in with his speech advocating “no taxation without representation.” England repealed the act the following year.

Things simmered for a while, then came the 1770 Townshend Acts, a tax on goods imported from England. Citizens in Boston protested, resulting in the Boston Massacre where five Americans were killed.

Americans saw a pattern of King George III making a point that he could demand taxes without any input from those being taxed. Colonists erupted in 1773 with the Boston Tea Party when 150 colonists, dressed as Mohawk Indians, dumped the newly arrived tea into the harbor at Boston. There would be no tax on that tea!

The year 1775 was a pivotal year for the colonists. Late night on April 18, Paul Revere and William Dawes saddled up for their famous midnight ride to Lexington and Concord to warn the locals that the British were approaching to take the guns and ammunition stored there. (Gun control was an issue even back then!) Early on the 19th, 77 Americans were on the village green and faced the well-dressed English redcoats. Eight Americans were killed, and ten were wounded, and many of the redcoats died in their retreat to Boston, being pursued by the colonists who fired from behind trees. By the time the redcoats arrived in Boston, they had 273 casualties and the Americans 95. In June of that year, the Battle of Bunker Hill took place. Please note that at that time Americans were still not talking about separating from their mother country.

Most Americans wanted conciliation, not confrontation with the Crown. They wanted satisfaction, not separation from the Mother Country. Our second President, John Adams’ opinion was that only about a third of the colonists wanted independence, a third supported Britain and a third had no opinion.

On December 22, 1775, King George announced that the colonies were free from British rule through his Prohibitory Act! This crucial fact is almost unknown by modern Americans, and it puts the War for Independence in a completely different light. The Act provided that any ship trading with the colonies would be considered a “lawful prize.” Furthermore, it provided that all American crews could be “impressed” (forced) to serve in the British Navy as if they had chosen to enlist! Also, the cargoes would be sold, along with the ships, and the money would accrue to England. The Act also provided that some of the plunder would be sent to an English hospital, making it more palatable to those Englishmen (in Britain and America) with a conscience.

Sporadic fighting between American patriots and King George’s redcoats continued after the “shot heard around the world” at Lexington and Concord; however, the colonists still did not want to separate from England! It would not be until July of 1776 that frustrated and angry Americans would declare their independence.

King George declared war on the colonies, making the war a war of self-defense, not rebellion! In fact, our leaders always referred to themselves as loyal subjects of the King! Ben Franklin’s letter to the King in February of 1775 spoke of “your Majesty’s Subjects in America.” The Olive Branch Petition of May 1775 (submitted to the English Court on September 1) referred to themselves as “faithful subjects” and “most dutiful subjects.” The King would not even accept that petition! So, the colonies could see no hope for reconciliation as late as September of 1775.

The following month King George III “jumped the gun” and told Parliament that the American rebellion had “become more general and is manifestly carried on for the purpose of establishing an independent empire.” However, that was not correct. American leaders had not made any assertion as to pursuing independence from England. In fact, the Pennsylvania Assembly gave clear instructions to their congressional delegates that they “dissent from and utterly reject any propositions, should such be made, that may cause or lead to a separation from our mother country.” (English Historical Documents, p. 170.) Other colonies followed the leadership of Pennsylvania and issued similar instructions to their delegates.

When news of King George’s hasty action arrived in America in February of 1776, every informed person knew that the King had basically declared war on the colonies. One colonist, Joseph Hewes, who was opposed to a break with England, wrote: “The Act of Parliament prohibiting all trade and commerce between Great Britain and the colonies has been lately brought here by a Mr. Temple from London….I fear it will make the breach between the two countries so wide as never more to be reconciled….I see no prospect of reconciliation. Nothing is left now but to fight it out” (letter to Samuel Johnston, dated March 20, 1776).

When the Second Continental Congress met on May 10, 1776, it was apparent that they considered the Prohibitory Act of 1775 as the significant turning point in the separation from England. They asserted that George had “excluded the inhabitants of these united colonies from the protection of his Crown.” Their resolution ended with: “Resolved, that it be recommended to the respective assemblies of the united colonies…to adopt such government as shall…best conduce to the happiness and safety and their constituents in particular and America in general.” In other words, it’s all over except the fighting! The arrogant King had cut off the colonies, so bring it on!

America was now an independent nation!

John Adams said of the Act, “It throws thirteen colonies out of the royal protection, levels all distinctions, and makes us independent despite our supplications and entreaties…It may be fortunate that the act of independency should come from the British Parliament rather than the American Congress.” (Letter to Horatio Gates, dated March 23, 1776.)

There have been many false charges made by Christian leaders for many years about the break with England. How could Christian Americans who had been impacted by the Great Awakening in the 1740s become such red-hot zealots and rebel against the mother country? Now you can see that was not the case. We were forced to defend ourselves against the King who had cut the strings with the colonies. While there were actions perpetrated by non-Christian or shallow Christian patriots during that time, we modern Americans have no reason to be defensive about America’s past.

King George III was the source of many irrational acts that precipitated the deaths of 25,000 American soldiers; 8,000 of them died in battle, and the other 17,000 deaths came from disease. It appeared that King George tried to push away the Americans with his many belligerent actions. But then King George had an excuse. He was part of European royalty known for incestuous marriages for decades. In his later years, he spoke nonsense for 58 hours and made many notorious statements and decisions, much to the embarrassment of his family and the British nation.

However, Americans know about an out-of-control leader, refusing to take advice and not admitting personal errors, and making tragic national and international decisions. And finally, talking nonsense for hours. Yes, Americans are aware of that.

God help America. Our best days are behind us, and the American Dream is now a nightmare.

The post America’s War for Independence: More Resistance to Tyranny than Revolution or Rebellion appeared first on DailySurge.