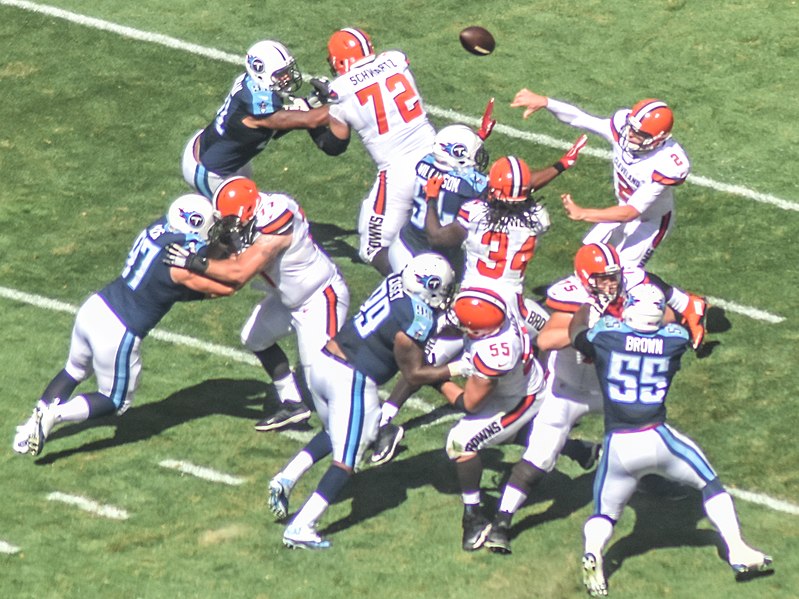 Surge Summary: Week 8 wasn’t Pigskin Pundit’s best showing – so here he is looking to do better: His predictions for all NFL contests, week number nine.

Talk about your Halloween Horrors, I got murdered last week.  As my buddy Matt always tells me, ‘It’s the NFL; anything can happen in a given week.’  Still, I didn’t see this coming.  At 7-8, I got the trick on Halloween, and will be spending the week in the Box of Shame.  I’m not alone in tricks and treats, either.  Derrick Henry went down to a broken foot. Jameis blew a knee for the season. NFL trade deadline made the rich richer as Los Angeles got the ‘treat’ when Von ‘Killer’ Miller gave up thin air for smog, and a shot at a Superbowl.  It took Covid to sack Aaron Rodgers.  Las Vegas got poorer in a horrible DUI mishap that took Henry Ruggs out of football and another poor soul out of the world.  Please be thoughtful and careful out there, my friends.  Here’s the picks.

Jets at Colts – The Jets got some ‘White Privilege’ from their backup QB, who made the ‘Break Glass in Case of Emergency’ arrival of Joe Flacco look completely unnecessary.  Mike ‘Who?’ White declawed the surging Bengals and beat the stripes off Joe Burrow with 405 yards of passing and 3 tds, pinning 17 points on the board in the 4th quarter.  Meanwhile, the Colts found a way to lose in OT to a Henry-less Titans team, as Carson Wentz slightly crazy with his passing decisions.  The Colts are the better team and home, so the smart money stays with the Lucky Horseshoes this week.  Blue & White bucks Gang Green and White in a fight that’s tight.

Falcons at Saints – The Falcs are just a mystery.  Win one, lose one, no rhyme or reason to it.  Ridley took his mental health off the field and roster (hope he makes it back!).  The Saints lost Winston for the year, a severe blow to a team that was showing momentum and progress.  Trevor Siemian steps in, but will he run things effectively?  One thing’s for sure – these ain’t gonna be pretty games.  Well, New Orleans is still a better team than Atlanta, so roll with Payton’s Haloes this week.  Fleurs de Lit flog the flopping Flappers from Atlanta.

Broncos at Cowboys – Broncos and Cowboys go all the way back to the old west, but this Orange Blush puts no scare into Dallas.  They haven’t beaten anybody who has beaten anybody, while Jerry’s team has a Jones for end zones.  Look for SpeeDee Lamb to leave vapor trails through the Denver secondary, while Zeke makes the most of Miller’s departure for LaLa Land.  Broncs get rode hard and put away wet.

Patriots at Panthers – The Massachusetts Minutemen stifled the Rifle in Los Angeles last week in a defensive masterpiece, while the Black Cats did just enough to fowl the Falcons, as Luvu, Thompson & Reddick planted Matt Ryan so many times he got grass stains on his teeth.  They will find that New England does a better job protecting Mac ‘Me And Mrs’ Jones, who will then proceed to dissect their secondary.  Christian or not, the Panthers are likely to bow Sunday with or without Slingin’ Sammy Darnold.  Pats go over .500 this week.

Vikings at Ravens – The Cravens have ‘strugggglled’ on defense, as Joe Namath would say, especially against the run.  Cook and Mattison are likely to exploit that, creating downfield opportunities for JustJeff, Thielen & Conklin.  Shellie Richardson and Ev Griffen are QB eaters, and we saw Cincy clamp down on Action Jackson two weeks ago.  The Raves are home, but still missing key pieces after the bye.  I’ll go against the NFL pickers this week and take the Vikes on the road.  Zimmer shimmers while Harbaugh simmers.

Browns at Bengals – One if by land, two if by air.  That’s how the Battle of Ohio shakes out this week.  Half of Cleveland’s running game versus Big Throw Joe’s rocket launcher.  Cincy’s trap game was last week, so they will be hungry to regain the form that shackled Lamar Jackson two weeks ago.  Pretty even matchup on paper, but I no longer believe in Cleveland.  Bengals ride their Burrow to victory.

Bills at Jaguars – I missed last week on the Jags by a southern-fried mile.  Like The Who sang, ‘Won’t Get Fooled Again’.  Buffalo continues their march to a playoff bye by saying bye-bye to these bygone Jaguars, by and by.

Texans at Dolphins – Whodayalikehere?  The Phins played tough last week, holding the mighty Bills for three quarters in Orchard Park.  Darn game went FOUR quarters though, so they got clobbered in the end.  Houston looked lost for three quarters in Ramsville, then found another gear and popped for 22 when it was too late.  Davis ‘General’ Mills made some nice throws and scrambles, and Brandon Cooks when he gets going.  Itsa pickem, where do you stick em?  Flipper jumps the Bull, barely.

Raiders at Giants – The Vegas personnel curse continues with the loss of Henry Ruggs to his pal Johnnie Walker.  Sincere condolences out to the family of his victim.  The Jints have played tough for a horrible team, hanging with KC this past week.  Lost Wages still has enough firepower on both sides of the ball to disassemble what’s left of NY, so Vegas gambles while Danny Dimes scrambles, as his team becomes a shambles.

Chargers at Eagles – Who would have considered this a close match earlier in the season?  But Philly has shown signs of life and the Chargers have shown signs of vulnerability lately.  We don’t know how hurt Herbert’s throwing hand is, but what we do know is LA is better in every major category than the Eagles, except rushing.  LA got gashed frequently by NE’s run game last week, so we’ll see if they correct that.  Eagles lose in a low Boltage game.

Packers at Chiefs – Fresh off a desert spellbinder with the Cardinals, Aaron ‘Buck’ Rodgers went directly onto the Covid ‘No play’ list.  Jordan ‘Showmesome’ Love will be taking Packer snaps in Arrowhead and trying to flex more NFC muscle under the noses of the Cheaps.  KC is trying to patch too many holes in their war canoe before it sinks. Even if they beat Green Bay, methinks the next three weeks will put their season to bed as they face the Packers, Raiders and Cowboys.  Chiefs succeed in the first of several ‘last stands’, as they look for Love in all the right places.

Cardinals at 49ers – Phoenix learned that the top of the mountain is hard to hold onto last week, in a Halloween thriller with the Packers.  Actually, the loss was probably a good sobering-up moment for them, as they prepare for the second half of the season.  Frisco beat the Bears on the legs of the prophet Elijah (Mitchell), who walked on water, turned Bears into stone and even pushed then entire Chicago defense into the end zone for six.  When they needed air work, the prophet Samuel answered with divine speed and grace, hauling in rainbows from Glass Jimmy.  Miraculous!  This should be a spirited game, but I expect Arizona to bounce back from the Packer loss.  Murray in a Hurry throws td’s in a flurry, while Frisco’s secondary scurries.

Titans at Rams – Tennessee had regained their mojo over the last few weeks, morphing into the team we expected them to be….then the Halloween horror struck and they lost Derrick Henry.  Still a very good team, they signed Adrian Peterson from the antique shop to fill the winged shoes of the Wrecking Ball.  I’m not buying AP at this point in history, as he showed he IS history with WFT when he last played.  The Rams got Von Miller….who do YOU think wins Sunday?  Miller’s not young-of-the-year, but put him into an already dominant defense and you’ll see a rejuvenated man.  Almost doesn’t seem fair, tbh.  McVay says up, up and away in LA, as the Titans pay.

Bears at Steelers – Two formerly proud blue-collar teams face off at the Ironworks. Pittsburgh has shown life lately, as Mike Tomlin’s teams never seem to be mediocre for long.  Justin Fields will make this game interesting, as he has shown quite a bit of spunk recently, but he alone can’t lift these Bears above their own ordinariness.  Steelers forge another victory at home.