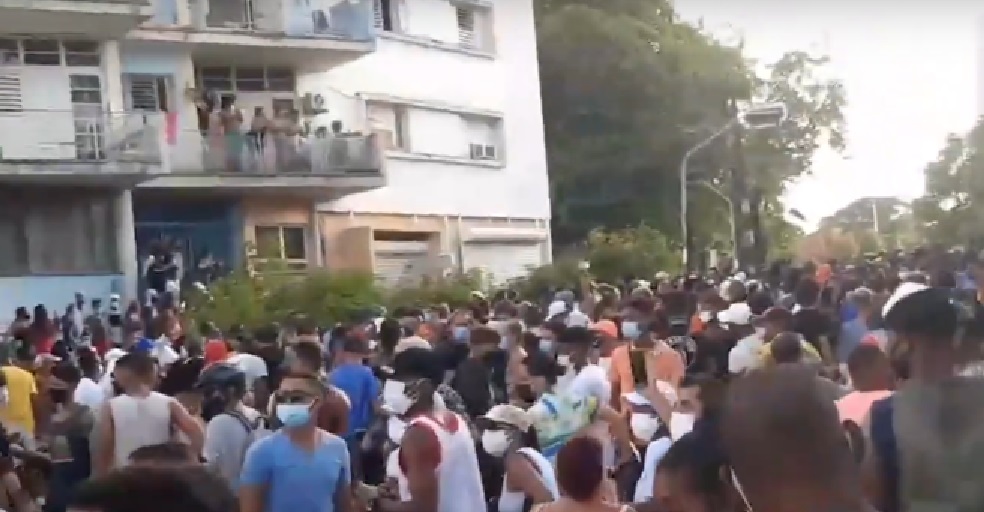 Surge Summary: As Americans celebrate Thanksgiving Day with feasting and festivities this week, they’d do well to remember the suffering of the people of Cuba – and recognize the cause of it: Oppressive Marxist Communism.

Can we pause this week amidst our festivities and freedoms to ponder the plight of friends and fellow Christians still enslaved in the socialist state of Cuba?

“Regard prisoners as if you were in prison with them. Look on the victims of abuse as if what happened to them had happened to you” (Heb.13:3 MET).

Anyone listening to Bernie Sanders, A.O.C. and other “progressive” Democrats promoting a socialist utopia for America should consider the brutal realities of what life is like in a country just 90 miles away. Bottom line: it’s heartbreaking. Ask folks in Venezuela as well.

People Are Suffering and Scared

Four months ago thousands of Cubans repressed for over 70 years took to the streets to protest in one of the largest demonstrations in decades. Last week a second peaceful protest entitled “Civic March for Change” (3:00 PM in 10 cities like Havana and Guantánamo) sadly fizzled as Cuba’s totalitarian Marxist government employed their strong-arm “cancel culture” tactics to frighten the people and stifle the rallies.

Hundreds of dissidents who dared to demonstrate peacefully at the July rallies remain in jail and a cooperative media makes sure the other people are reminded of their fate. Uniformed police and plain-clothed enforcers intimidate the people along with state security officers who stake out homes of pro-democracy leaders.

A young female dissident (who would love an opportunity to educate millennials in America being seduced by socialism) stated it simply, “People are scared.” Representatives of the leftist regime make sure people understand that they will not tolerate those who are a “part of the destabilization campaign initiated by the United States.”

US Secretary of State Antony Blinken condemned “intimidation tactics” by Cuba’s government and vowed that Washington would “seek accountability” for the crackdown. What that means is anybody’s guess especially in light of Biden’s withdrawal from Afghanistan and abandonment of Americans and our allies trapped behind enemy lines for almost 100 days.

July’s dissident’s march gained global attention but has faded from most people’s memory while multitudes in Afghanistan and Cuba face continual repression, horrible penalties, suffering and persecution. In our nation as malcontents and Marxists try to tear down our country, it’s Christian compassion to ponder their plight and pray for divine intervention.

After 70 years of totalitarian rule and barbaric treatment of dissidents daring to question the socialist state, thousands of demonstrators took to the streets this summer. The Cuban people, just like citizens in Venezuela, are suffering under another economic crisis with severe food shortages, high prices and pandemic sickness and death.

Communications remain cut off so the world can’t see the military’s brutal shooting and beating of the protestors.

Today in Cuba “revolutionaries” masterfully manipulate the masses. Radical rabble-rousers present “history” that does not reflect reality but romanticizes “heroes” like the Castros and Che Guevara (murderers and criminals) while working aggressively to dismantle the nation’s founders and foundations. It’s happening in the U.S. through CRT (Critical Race Theory) and the 1619 Project whose creator praised Cuba as the “Most Equal country in the Western Hemisphere – a model for the U.S.”

In 1959 Fidel Castro assured the world that he was not a Communist. Taking office he said he admitted he was a “Marxist” (like BLM leaders) leading gullible citizens on a pathway to “peace and prosperity.”

Castro called himself a “freedom fighter” yet he eventually curtailed any ownership of private property and private enterprise. He told the people, “Universities are tuition free” (but only to those embracing his revolutionary beliefs). He took control of media communications and implemented “cancel culture” long before radical leftists launched it here.

People trying to flee Cuba were tortured and executed. Castro killed over 3500 people by firing squad. In 1994 he was caught as he ordered a tugboat of women and children sunk while they were fleeing the repressive socialist state.

Government took control of elections with its goal of a one-party state (sound familiar?). He called Cuba a “People’s Paradise” yet what was once a beautiful vacation destination became a prison where people lost liberty, human rights and religion.

Castro demolished scores of church buildings and mandated children be indoctrinated with new curriculums. They propagandized the people into believing Cuba’s old order was systemically evil and needed to be replaced with the new order of caring for needs from cradle to grave. “Free healthcare! Free education! Free childcare!”

Pre-Castro Cuba in 1958 led Latin America in low infant mortality, literacy rates, passenger cars per capita, food consumption per capita along with TVs, radios and telephones. Cuba’s Gross Domestic Product was ahead of Italy, Spain, Ireland, Greece, Portugal and most of Africa, Asia and Latin America!

Today Cuba is an impoverished nation with minimal and archaic healthcare, contrary to Michael Moore’s documentary “Sicko” which was replete with propaganda. Higher education? It’s possible for the elite who meet the “state’s” rigid standards.

The average wage in Cuba is now about $20 per month with people living in deteriorating shacks. Its harbor is almost empty of boats so people cannot flee. The few people that own cars have 1950s models. On an island with a population of 11 million, 1.5 million have managed to escape.

Today in America half of Millennials say they choose socialism over capitalism. Time to wake up!

When Fidel Castro died in 2016, Obama eulogized him: “History will record and judge the enormous impact of this singular figure on the people in the world around him.” Biden sided with him in numerous “pro-Cuba” initiatives.

Samuel Rodriguez, president of the National Hispanic Leadership Council says, “They served as a de facto endorsement of one of the most oppressive regimes in recent history.”

When he was president, Donald Trump repeatedly expressed his empathy for the Cuban people and a firm commitment to foster freedom. His policies raised salaries of their counterparts in America (38% of Hispanics voted for him in 2020), as he demonstrated strong leadership regarding his opposition to communism by employing a strategy to strangle their economy and engender discontent on the island to stir the Cuban people to seek change.Here’s the Deal: After seven decades of communist tyranny, this Thanksgiving may we pray for our suffering friends facing ongoing brutal crackdowns displayed on Human Rights Watch. CiberCuba recently captured a woman’s husband shot and beaten in front of the family then taken away. While enjoying lavish meals and our many freedoms, let’s not forget our friends 90 miles away as we again remember God’s directive:

“Regard prisoners as if you were in prison with them. Look on victims of abuse as if what happened to them had happened to you” (Heb. 13:3 MET).

Please pass this along to educate others as we declare, “Viva la Cuba por Jesus Christo!”