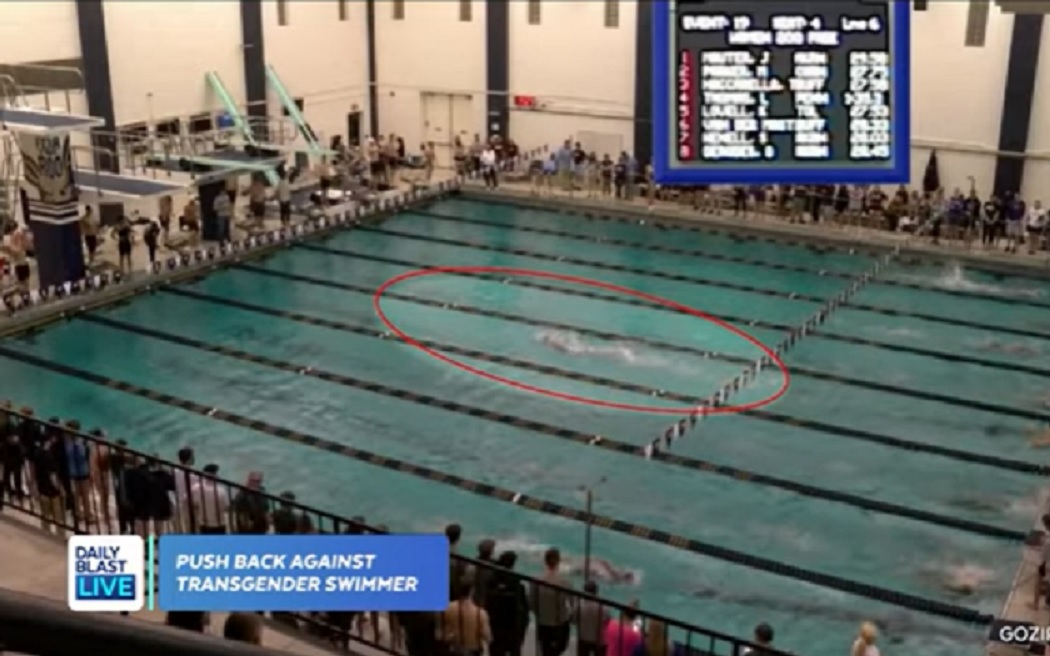 Surge Summary: A biological male pretending to be a woman is smashing records in women’s competitive swimming – and sensible people are being told we have to pretend this is healthy and acceptable. This kind of thinking points the way to a society’s disintegration.

In the latest example of transanity, a biologically male swimmer is smashing the women’s swimming records at the University of Pennsylvania. And this is supposed to be a cause for rejoicing, yet another example of inclusion and tolerance. To the contrary, it is the latest example of a society that has lost touch with reality. And once again, it is women who are being hurt in the process.

The case at hand involves Will (“Lia”) Thomas, who previously competed as a man at the same university prior to COVID, as recently as November 2019. At that time, according to the Washington Examiner, “Thomas was a second-team All-Ivy swimmer in three different events.” Now, he is smashing Ivy League women’s records.

So, from being a second-team male swimmer, he has now become a female champion, smashing the ladies’ hard-earned records.

But of course, there’s no difference between a male-to-female transgender and a biological female. Not at all.

Thomas has no unfair advantage.

And the emperor has no clothes.

And I have a bridge in Brooklyn to sell.

Really now, have we totally lost our minds?

I actually wrote the words “the emperor has no clothes” before reading these next paragraphs in the Examiner article, written by Zachary Faria: “We have already seen a man well past his physical prime taking a spot at the Olympics away from a 21-year-old female athlete . Now, a man who was winning against men just two years ago is dominating women’s swimming in the Ivy League, all because sports leagues and organizations are rejecting basic biology in favor of scientifically illiterate gender ideology.

“This is only going to get worse, as the Olympics have now signaled their support for more men to compete in women’s events. While transgender activists continue to promote the idea that men can be women by simply identifying as such, corporations are refusing to grow a spine. Refusing to admit that the emperor has no clothes, they instead opt to stay silent.”

It looks like we are in sync. And yes, there is a reason I call this transanity – not to attack those struggling with gender confusion but to expose the moral and intellectual bankruptcy of our culture. At what point do we, as a society, cry foul?

Not only did Thomas win the events, but he smashed the Ivy League records.

So, against the men, even as a good male collegiate swimmer, he is nowhere near the top. Against the women, he is a star.

But, to repeat, he has no unfair advantage.

Anyone who would make that outrageous claim is a transphobic bigot.

And if you dare to refer to Thomas as a biological male – which he is, throughout his cellular structure and DNA – you will find yourself in hot water on social media. Dare to “deadname” him and refer to him as Will, and you might just find yourself banned.

And who are the real victims in all this?

First, the women against whom he is competing, young ladies who have pushed themselves to the limit in the pool for years in order to fulfil their dreams, only to have those dreams smashed by a male.

Second, the gender-confused children who will continue to be fed lies by the society, from the media to the medical profession to the world of sports, believing that they should start to “transition” as soon as possible.

Ah, but these days, to say that a bigger, stronger male should not be competing against smaller, less strong females is a sign of ignorance. And advocating for something better than surgeries and unnatural hormone therapies is a sign of hatred. And standing up for women’s equality is a sign of bigotry.

God help us to wake up to reality before we completely self-destruct.

The post Excited to Hear that Male Swimmer Is Beating Female Swimmers? Ummm … No appeared first on DailySurge.