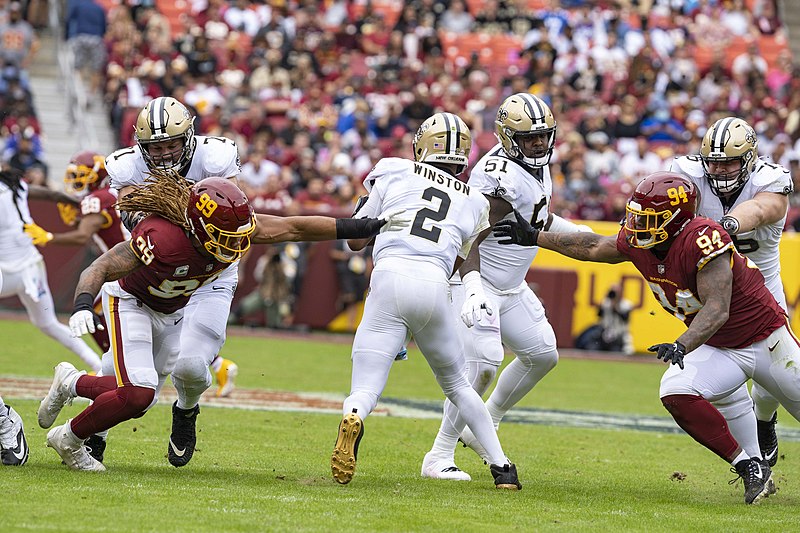 Forget order in the pigskin universe!  Between the inconsistency of team performance this season and the CONSISTENCY with which Covid-19 keeps peeling critical stars off rosters for a week or two at a time, it has been a pundit’s nightmare trying to make picks.  This past week may be the worst, with two games Monday and two games Tuesday left over from last week, leaving very little time for analysis of the impending cluster of games around Christmas.  Somehow, I managed to scrape together a 10-6 record last week and stand at 143-80 (65%).  Now before any more players are declared out for Covid this week, here’s the picks.

Niners at Titans – In the absence of King Henry, this is a much harder one to call.  Frisco has played better of late, while the Titans have had to file a Missing Persons report every week for 30% of their roster.  You ask me, Mike Vrabel might be Coach of the Year for holding together a team falling apart, physically.  If Bosa gets to O Tannehill several times, he could be the difference here.  However, if Vrabel can shut down the run game and force Garoppolo to beat them with his arm, I favor the home team with backs against the wall.  Tennessee gets a friendly visit from the Ghost of Christmas Present this week, after dragging Jacob Marley’s massive chain of injuries around this season.

Browns at Packers – Cleveland has struggled this season in many ways, consistency being a big one.  Green Bay has not, as their record shows that even the games they didn’t play great in they still won.  I don’t see a way that the Browns steal the cheese in Lambeau Field this week.  Green Bay unwraps a clinch and bye in their own living room on Christmas Day.  Ho Ho Ho.

Colts at Cardinals – Who wants to play the Colts right now?  They tell you ahead of time what they are going to do, and then do it anyway.  Nobody has yet figured out how to stop JT, and the Colts are the top football thieves of the NFL this year, making this squad a hot commodity in a contestable division.  Zona has struggled lately, as the Lions knocked them off last week.  If they think Craig Reynolds is hard to bring down, they are really going to see a lot of Taylor.  Power running is the Cardinals’ kryptonite, so this game will make or break them.  Every kid wants a pony for Christmas.  This year, they get a blue one.  Thanks, Santa!!

Giants at Eagles – The Giants are about to undergo a total remake, much the same way Ebenezer Scrooge did.  The entire franchise is in complete disarray, and the attic needs cleaning first.  The Eagles should win this game handily, giving themselves the gift of self-respect.  Giants reboot, while Philly boots rears.

Rams at Vikings – Strength against strength in this game, as two Sack Exchanges lock horns.  Both teams have good O-lines.  Both have good QBs and highlight-film receivers.  What is missing is Dalvin Cook, felled by Covid this week.  Mattison is decent, but running into the teeth of the LA Lockdown is more than his shoulders will carry.  The duel between JustJeff and Jalen Ramsey will be must-see tv.  ‘Oh, Zimmer got run over by a Ram, dear, walking home from our house Christmas Eve’…LA and McVay ride home in Santa’s sleigh.

Bills at Patriots – The Pats played a horrible game against Indy last week, and still took it down inside the 2-minute warning with a chance to win/tie the game, before Super Taylor seared the defense with a 67-yard blaze and a killer td.  That said, Buffalo knows this is another do-or-die game, and I don’t think being on the road in cold weather is any deterrent to them.  IF the Pats have Harris back and IF they return to the form they showed prior to the Indy debacle, they are better than even to unwrap a win for Christmas.  If either of these conditions is not met, Buffalo will be ready to reassert their primacy in the AFC East.  My gut tells me that Harris isn’t ready, which means that much of the team’s offense will fall on Jones.  Let’s not forget this is STILL the league’s top defense the Pats are facing this week.  Buffalo delivers coal to the Patriots’ stockings.

Buccaneers at Panthers – ‘Pissed-off, rude Tom Brady’ made an unusual appearance last week in a surprise blanking by the Paytonless Saints, which will probably get him onto Santa’s Naughty list.  He will be looking to get his pirate mojo back against a softened Carolina team that wants a new QB under their tree this Christmas.   If the Bucs don’t roast the Panthers’ chestnuts this week, it will be a Christmas Miracle. Pirates punish the Pussycats.

Jaguars at Jets – Well, I thought the departure of Urban Fired would ignite the Jags enough to beat Horrible Houston…this team is just broken.  Shad Khan looks the fool, and I don’t know how they fix this.  The Jets, for all their flightlessness this season, look more like a football team, and Zach Wilson’s passing numbers are actually better than the lank-haired long-ball launcher Lawrence’s.  Jags get bagged while Gang Green sings ‘I’ll be home for Christmas’.

Lions at Falcons – Wow, the Lions have awakened, especially with the early Christmas present of Netflix…er, Craig Reynolds, lugging the pig.  Jared Goff looks as though he has embraced his immediate future and decided to go all-in as well.  Here’s the facts, though; Detroit is on the road, they face a better team and QB who still have a chance of tasting the playoffs, and Russell Gage has been lighting it up downfield lately in the absence of Cal Ridley.  Can Reyolds wrap a win up for the roadies this week?  Nope, cue up ‘There’s No Place Like Home For The Holidays’ for Falcons, and ‘Blue Christmas’ for Danny Campbell’s Cryins.

Chargers at Texans – Even without Ekeler (Covid) this week, the Bolts are chasing playoff berthing and not about to be stalled out by Davis ‘General’ Mills and his Houston cornflakes.  LA can see the postseason from here, and they know it is there for the taking.  Herbie the dentist elf puts teeth into his offense as they bounce the Bumbles from Humble, TX.

Ravens at Bengals – Ferocious matchup for the division lead, as two 8-6 rivals square off again.  Cincy has a strong pass rush with new Pro Bowler Trey ‘Dark’ Hendrickson culling his share of passers.   Baltimore Chased Ja’marr fruitlessly last time, but he has not been as dominating in recent games.  Expect Action Jackson to play this week, adding depth back to the Ravens offense.  This should be a bloody battle as control of the division either changes hands or remains in the same hands.  Change is good…Cincy finds silver and gold, while Baltimore is out in the cold.

Bears at Seahawks – As often as Russ Wilson will get intimately acquainted with the Bears’ pass rush, there is still more going for Seattle than Chicago at Yule tide.  Fields is coming along as expected, making lots of freshman mistakes he won’t be making 2-3 years from now.  I expect a big game from Bobby Wagner, and I think Wilson will be able to find open receivers downfield against DaBears.  Seahawks sing Christmas Carrolls at Pete’s house this week.  Pass the peppermint lattes, please.

Steelers at Chiefs – This year, the Steelers ARE Kansas City’s Christmas gift.  Not quite dead, in Monty Python terms, but only a whack or two away….unless…unless, both Travis Kelce and Tyreek the Freak are out on Covid protocol!  Which they are!  Oh humbug!!  The Chiefs are going to win anyway, as their defense denies Pittsburgh access to the endzone.  ‘Oh little town of Bethlehem how still your steel mills lie, your football team has lost its steam, and so we say goodbye…’

Broncos at Raiders – An elimination game as the loser is done.  Denver boasts the two-headed ground pound of Mel ‘Commissioner’ Gordon and Javonte ‘Andy’ Williams, but the Broncs have suffered at QB for years and this season is no better.  Teddy Bridgequarter has lived down to the nickname I gave him, and Drew ‘Master’ Lock hasn’t found the key to being an NFL starting QB.  This plays into the Raiders’ hands, as they DO have a legit QB and would very much like to advance to a playoff berth.  Vegas has the cards they need to win, they just need to play them correctly this week.   ‘Do you see what I see?  A Carr, a Carr, throwing down the field, for a victory soon to be sealed…’

Bedspins at Cowboys – I have decided to mock Daniel Snyder’s decision to form a team-naming committee, by calling his team whatever I want for the rest of the season.  If you want to be a silly owner, expect silly criticism.  What won’t be silly is the holiday beating Dallas lays on the Threadfins, as they wrap, stamp and mail them to Losersville this week.  Trevon Diggs and Micah Parsons are going to Scrooge Heinicke out of many completions, as they smother the DC receivers and backs.  ‘Silver stars, Silver stars, It’s Christmastime for the Cowboys…’

Dolphins at Saints – Interesting game to close out the holiday festivities.  The Saints have played lock-down, knock-down defense of late, vanquishing the Bucs last week as Lattimore has given Lattiless to opposing receivers, and Malcolm Jenkins has proven solid over secondary receivers.  The Whodat offense is a dog’s breakfast much of the time, but that nasty D keeps them in games.  Miami is riding a 6-game win streak, on tough pass rushing and stiff pass coverage.  They can be run on, but Alvin ‘Camaro’ has been quiet and Taysom Hill hasn’t proven to be versatile enough at passing OR running.  This is a ‘shake the present and guess’ outcome.  I’ll shake and go with New Orleans’ on the strength of that defense and kicking game.  ‘I saw three kicks come sailing through, against the Bucs, against the Bucs…’

It’s the most wonderful time of the year!  Merry Christmas, everyone!!  Enjoy the games.