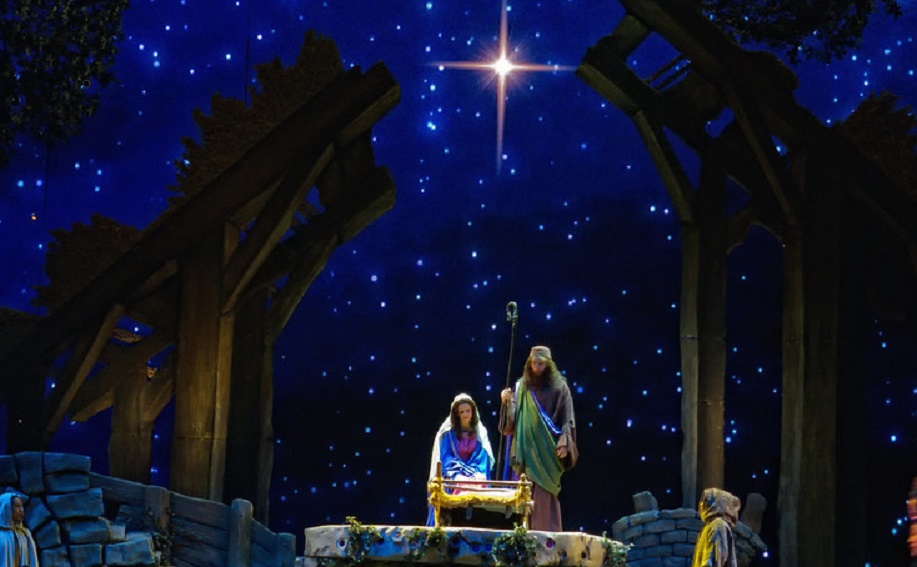 Surge Summary: The story of the birth of Baby Jesus is about so much more than warm and fuzzy feelings. He had to become a flesh-and-blood earth dweller if men were to be saved. It was the only solution to humanity’s sin dilemma … and God found a way to make it happen.

One afternoon this holiday season, a line from Harry Belafonte’s familiar, calypso-styled Christmas song “Mary’s Boy Child” stabbed home to me: “And man shall live forevermore, because of Christmas Day.”

Regrettably, while so many muse on the entrancing moment that took place in that manger in Bethlehem, they lose sight of the fuller picture: why Jesus Christ actually needed to make His entrance the way He did in the first place.

I’m reminded of another, rather lesser-known seasonal tune, this one from Windham Hill’s Winter Solstice collection: “A Simple Birth” is a lovely instrumental piece addressing, I assume, Mary’s bringing forth her firstborn son on that long-ago, mystical night.  If the “simple” reference is alluding to the reportedly austere conditions of His arrival, it’s pretty accurate.

I’d note, however, the details of Christ’s birth as popularly – if not always accurately — celebrated are about a whole lot more than the romantic or evocative touches recalled so assiduously every December (a traveling family huddled in a cow stall, oxen, donkeys, lambs and shepherds as spectators, exotic “wise men” on site, etc.)

Point of fact, there’s a majestically profound reasoning behind Christ’s nativity as it unfolded in that humble spot. Technically, there’s a supreme logic requiring the Savior to be born as a human being and sinlessly live out an appreciable chunk of years on this ball of mud; to then suffer the death penalty for the spiritual delinquency of collective mankind.

Contra many a “woke” modern, the Creator believes rather robustly in capital punishment.  Make no mistake, He prefers “mercy over judgement” (James 2:13); but He also acknowledges the loss of life is ultimately, dreadfully required for individuals who refuse to deal in the divinely allotted manner with their disobedience to Him. (That would be repentant faith in God the Son, crucified for man’s guilt and risen from the dead three days later (Romans 10: 9-10).

Animal sacrifices prescribed in the Old Testament system? They couldn’t resolve humanity’s sin problem. Brute critters could never serve as permanent proxy for iniquity-tarnished people. Those Mosaic measures were always intended nothing more than temporary stop-gaps (as explained at length in the New Testament book of Hebrews).

Neither could a flawed human “priesthood” definitively set things right in the stead of others. Religious leaders’ own spiritual shortcomings, even the “best” or most conscientious of them, rendered them unworthy. They needed atonement for their own sin, never mind covering that of the rest of humankind.

And no: an unexceptionably righteous God can’t simply wave away people’s acts of defiance and evil, ignoring it, pretending it doesn’t exist. He is holy, just. The culpability of a fallen race must be answered appropriately. So, the gracious Creator devised a way to appease his justice while simultaneously satisfying His longing for corrupt men and women to be relationally restored to Him.

What exactly did this loving God do?

He tells us. He shows us.

God the Son became a flesh and blood male, a complete human being; brought to terra firm via the miraculous means of a virgin birth. He was raised in a Jewish household, encountered life’s straits as do all men, yet obeyed His Heavenly Father explicitly and consummately. No lapses (Hebrews 4:15). Then Jesus offered Himself a spotless, stand-in sufferer for a helpless humanity; perishing on their behalf; taking the consequences for everyone else’s transgressions.

“Inasmuch then as the children have partaken of flesh and blood,” writes the Apostle Paul, “He Himself likewise shared in the same, that through death He might destroy him who had the power of death, that is, the devil” (Hebrews 2:14).

That process was the only remedy for a cosmic, existential quandary. The Almighty arranged a way for all the pieces to come together – and the terrestrial spark that began the whole thing was that mysterious, hushed incident in an Israelite backwater called the City of David, Bethlehem, over 2000 years ago.

Even the earliest specifics of Jesus’ planetary debut hint somberly at his long-term, grim –literally bloody – mission: Luke 2 recounts shepherds laboring in the Bethlehem region and visiting the infant on that historic night. Sheep, of course, are arguably the quintessential, iconic sacrificial offering under Jewish law. Shepherds there to greet Him those first hours of His life is, therefore, packed with prophetic significance: That baby who would mature to become “the Lamb of God who takes away the sin of the world” (John 1:29).

When the enigmatic “magi” (Matthew 2) paid their respects, among their gifts to the heaven-ordained Child and His family was the Arabian resin myrrh, used regularly at that time in the preparation of bodies for burial. Fascinatingly, John 19 tells us it was employed three decades later when the adult, crucified Christ was laid in His tomb.

At the dedication of several-weeks-old Jesus, the elderly Simeon cryptically informed Mary “a sword will pierce through your own soul” – suggesting heartache awaited this mother who would one day have to watch her Son die a torturous death on a Roman cross.

True enough, the birth of the Savior was always about … well, His being a Savior. As the Angel announced to Joseph months previous, He would come into the world to “save His people from their sins” (Matthew 1:21). Even the name assigned to Him by that celestial emissary – “Jesus” – means “The Lord saves”.

In Him, the demands of implacable justice and yearnings of impossible mercy were accommodated.

”[R]edemption … is in Christ Jesus, whom God set forth as a propitiation by His blood, through faith, … to demonstrate at the present time His righteousness, that He might be just and the justifier of the one who has faith in Jesus” (Romans 3: 24-26 NKJV).

All the miraculous cogs had to mesh seamlessly for the human race to have this stab at forgiveness, transformation, eternal life. No hiccups tolerated; no glitches.

And mesh they did. A perfect person was born, lived unimpeachably till adulthood, took the punishment deserved by everyone else; the innocent for the condemned. Those needy ones are now called by God to embrace by faith the solution – this only solution (John 14:6; Acts 4: 12) – He’s provided.

“Trumpets sound and angels sing/Listen what they say/That Man will live forevermore/Because of Christmas day”, the song croons.

The post The Only Way: Miraculous Genius of the Nativity of Jesus appeared first on DailySurge.