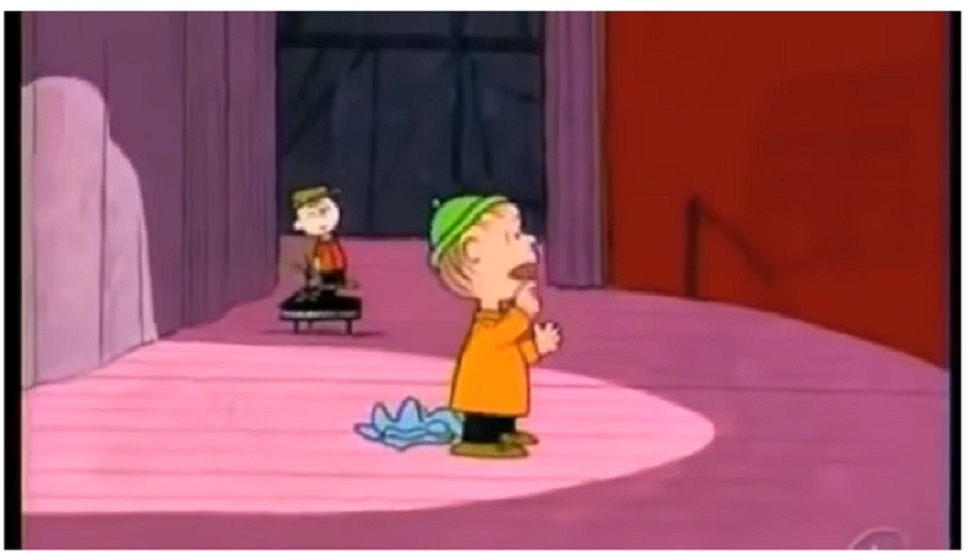 Surge Summary: Linus’ speech in A Charlie Brown Christmas brings words that remind us what Christmas is all about. It’s “Good News” many of the people of Jesus’ day missed — and which many today may miss as well.

Whether it’s getting the guys together for Superbowl Sunday or gathering for a candlelight service on Christmas Eve, traditions are the way we mark things that are important to us.

Over time, as our priorities change, our traditions change with them.

In the process of discarding old traditions, we lose a small part of ourselves and the culture that made us who we are, whether we realize it at the time or not.

One tradition that shines a light on this change is the old cartoon classic, ‘A Charlie Brown Christmas’.

When that cartoon first came out in 1965, our culture was already wrestling with shifts in priorities like the commercialization of Christmas that we can recognize so readily in our own day.

Charlie Brown accepted that Christmas was a ‘thing’, that it had some sort of meaning that should be appreciated, but he wasn’t feeling it, and the whole idea was lost on him.

The kids from the comic strip (and Snoopy) are on a stage preparing a Christmas performance and, predictably, things have been going all wrong for Charlie Brown.

Mocked and laughed at by the other kids, and coming to the end of his rope, Charlie Brown calls out an angsty cry to anyone who may be listening. He shouts out the question he desperately needs to have answered…

‘Isn’t there anyone who knows what Christmas is all about?’

And of course, there WAS someone who knew that answer, Linus. He explained to Charlie Brown by reciting — from memory — the events from the second chapter of the gospel of Luke.

He performed a one-man Christmas Pageant.

Christmas pageants, for those too young to remember them, were one of those Christmas traditions that was very much a part of Western culture, where we would retell the same story Linus recounted year after year.

That retelling would reorient us. It would turn our attention to something larger and more transcendent than the ordinary here-and-now that can so easily swallow us whole. It would anchor us in the eternal.

That retelling — even this Charlie Brown story — assumes a certain familiarity with the basics. We may have all been speaking enough of the same language when this came out that the remainder of Luke 2 was enough.

But Linus repeated the angel’s announcement of a very special event: the birth, in the City of David, of a Savior, who is Christ the Lord.

Christians might read those words and breeze right past them because we have (or think we have) already absorbed the meaning of those terms. But because the Christian faith calls upon both the head AND the heart, and lays out explicit truth claims which would require explicit belief, real understanding is a critical step in this process.

What that announcement means — the short version

The angel is pretty much breaking a news story to a world that didn’t have the foggiest clue that anything special was happening.

It wasn’t the dour news you’d normally see on CNN, either. It was ‘glad tidings of great joy’, meaning that anyone who heard this news, and understood why it was significant to their lives, would be over the moon happy about it.

This news that was being announced wasn’t just for some elite club, either. Notice who these ‘glad tidings’ are being offered to. ‘All people’. Not just religious insiders, or people who live in the right neighborhoods. Not the movers and shakers who have all the connections and are known around town.

This news was being given to shepherds. The kind of guys respectable citizens didn’t want their daughters to date. People who aren’t normally even invited into polite society are being given this amazing news from an angel!

Ok, so when do we get to the amazing part?

A promise from God that the entire country has been waiting to come to pass is being fulfilled ‘THIS DAY!’ and God picked THEM to hear about it.

So who was this promised person? God dropped plenty of breadcrumbs throughout scripture, but the religious leaders kept tripping over their own feet trying to work out the meaning of some complex ideas that seemed to contradict each other.

But these religious leaders had trouble recognizing the arrival of the promised one because they were thinking too small. They wanted a POLITICAL solution to a problem that went far deeper than politics. Their problem went right to the heart.

You see, God gave Israel a land of their own and eventually set David up as King in their golden age about 3000 years ago. Moses warned them that chasing other gods would come with some serious negative consequences, including having their beloved country get kicked around by their powerful neighbors. To prove this point, Assyria and Babylon each carried away part of the Jewish people, but after a period of time, they returned to their homeland.

But they didn’t get to rule it. Israel remained a vassal that was passed back and forth between a series of successor empires.

Israel thought their problem required a restoration of their political place in the world. But that would have just repeated the cycle of rebellion, rebuke and repentance that had played out again and again and again right back to the time Moses was receiving the law on mount Sinai.

The problem wasn’t a flaw in the rules or in God, the real problem was in our wayward heart being fundamentally unfaithful and easily tempted away from God to chase shiny objects.

In the City of David — they were there because of the census and the royal lineage his parents shared with David — was born a promised descendent of David.

So much to unpack there. Books have been written about it.

Short version — Savior. Rescuer. Like a lifeguard on the ocean, he has come to save people who don’t have the power to rescue themselves.

Christ. The annointed one, the chosen one. He came, sent by God for this specific purpose.

The Lord. Supreme in Authority.

We’re not talking some religious huckster on TV selling bromides and platitudes.

They didn’t know it yet, but these shepherds were hearing about GOD stepping into the story He himself had written.

And the Good News?

Jesus didn’t enter the world so he could set up a kingdom that freed his people by conquering political enemies like DAVID did.

He was offering freedom from the wickedness that lurks in our own hearts.

He didn’t just come to judge our sin, he came to rescue us from it.

In a world crammed full of self-help books that never quite solve the problem we find in our hearts, THAT is some good news.

If you want to look a little deeper at what — exactly — Jesus came to save us from, Doug and Rich covered it in their latest Warriors and Wildmen podcast. Check it out!