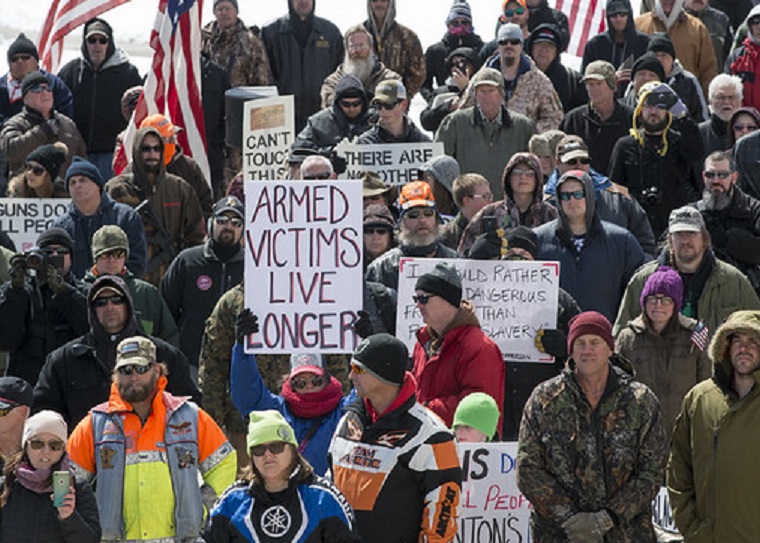 Surge Summary: A combination of increasing crime, elite hypocrisy and media dishonesty is causing Americans who once supported gun control to move toward passionate support for the right to bear arms.

Most of us have fired a gun at least once. Many of us have a gun in our home today. Gun ownership has increased steadily over the decades and is now common. Running counter to that trend, Democrat politicians became increasingly hostile towards gun owners in the last ten years. The Democrat party took that position while public opposition to gun-control grew. Today, Democrat voters want gun-control as much as ever, but we saw the undecided middle and political independents step off the gun-control bandwagon. Here is why they abandoned the idea of gun-control.

The rate of crime fell steadily for decades. Despite that trend, we saw political policies in Democrat controlled cities lead to a recent increase in crime and violence. We saw sentencing reform and bail reform put repeat offenders back on the streets. We saw riots and looting justified by Democrat politicians as legitimate expressions of political protest. Under Democrat administrations, we saw the country’s borders thrown open and an increase in drug trafficking along with rising gang violence. The average citizen saw extraordinary levels of social unrest.

Our mainstream media sensationalizes violence in the news and in entertainment. They tell us mass murder is common. In fact, mass murder is extremely rare. The media tells us criminal violence with a gun is routine when it is a small fraction of all violent crime (8%). The media tells us firearms accidents kill many of us when they are a fraction of a percent of all accidental deaths.

The mainstream media hides the benefits of being armed while it magnifies the risks. The media tells us that gun ownership is rare, yet about a third of us own guns. The media tells us that armed defense against violent crime doesn’t happen, yet it happens over a million times a year. Today, about one-out-of-9 of us have used a firearm in self-defense. The mainstream media hides those facts from us.

But seeing the Summer of Unrest on our TV screens caused many of us to wonder about our personal safety. A significant fraction of those who slightly favored gun-control came to question their position. The increased awareness of violence moved some gun-control supporters to take more moderate positions. And this increased awareness of violence moved the already political-moderates to the gun shop where they investigated which firearm might fit their needs.

The largest segment of new gun owners are urban minority women. That demographic group was considered reliably liberal and strongly anti-gun. That was yesterday’s stereotype. Gun owners and advocates of citizen self-defense now come from every segment of society.

The shrill cries for gun-confiscation seem out of touch with our experience.

We hear the call from Democrat politicians for mandatory disarmament of ordinary citizens. Minority women hear these gun-confiscation proposals as being directed at them since they are particularly vulnerable to violent crime. They see the crime in their cities. They know the victims. They hear the calls for forced disarmament. They wonder when and if the criminals will ever be forced to give up their guns.

Democrat politicians criticized firearms because some guns were too affordable. Guns were demonized if they were too easy for the average person to operate. Guns were condemned if they were effective in stopping a large number of criminals before the defender ran out of ammunition. Every firearm was suspect and needed more regulation. These arguments no longer ring true for those who have faced violence and destruction in their own neighborhoods.

Consider that the media called a gun a “patrol rifle” or “personal protection firearm” when a state employee carried it. Yet Democrat politicians called the identical gun an “assault weapon” and a “weapon of war” when honest citizens had that firearm in their closet. Millions of us heard the double-speak.

The hostile and extreme anti-gun rhetoric by Democrat politicians alienated independent voters and confirmed the beliefs of political conservatives. The anti-gun media said we owned a gun because gun owners yearned to kill people. Many of us looked in the mirror or across the table and knew the media lied. We believed what our eyes saw and what our hearts felt. That changed our minds about gun-control and the people who advocate it.

Moderates who once might have supported some gun-control measures now looked at existing gun-control laws as infringements on their rights. They saw gun-control fail to make us safe in cities that Democrats controlled for decades. They recognized the well-worn promise of gun control as a broken vow rather than as a new idea.

Politicians doubled down. When we asked Democrat politicians about public safety, they repeated their call for honest citizens to disarm themselves and “just be a good witness.” We were supposed to stand and watch as our family was robbed and beaten. Then we were to call the police… who might never arrive to help us. We heard the radicals’ calls to defund our police, while politicians gave themselves full-time private security details.

The political and media elites criticized gun owners as being violent and callous. They said gun owners love their guns more than they love people. They didn’t consider the possibility that gun owners might have enough empathy to put themselves into their neighbor’s shoes and realized that they too might be the victims of violence. Any of us might have to defend the people we love. The anti-gun politicians and their media lapdogs cannot recognize this empathy with the victim. In return, many political moderates cannot recognize themselves and their loved ones in the media caricatures of gun owners.

The call to unilaterally disarm honest citizens sounds unbelievably calloused to the average voter when he or she considers their family being victimized or their businesses torched.

More of us saw the effects of violence with our own eyes.

Within the last few weeks, millions of us saw our local stores close early to avoid being ransacked by looting mobs after dark. Plywood covered windows replaced downtown Christmas displays. No business can survive when people can rob it at will.

These anti-rights Democrats are the same politicians who cried crocodile tears over an imagined “food desert” when grocery chains allegedly left our inner cities a few years ago. Today, we’ve seen stores of all types reduce their hours of operation due to the risks of crime. Just wait until their leases expire. Smaller drugstores and grocery stores will move away from the city center like a falling tide washing away the sand. These neighborhoods will experience “deserts” of all sorts. That is the ultimate cost of not prosecuting property crimes in Democrat controlled cities.

Government officials tried to blame the businesses for the mass shoplifting and looting. They told the police to stand down as criminals smashed and ransacked businesses. We are left to wonder if the police would also stand aside as our family is attacked. More of us felt that we have been left to defend ourselves.

These political choices may have sounded good in an academic paper, or polled well as a sound bite. We were not shocked when those policies failed. We were shocked at how little the politicians really cared that they had produced unprecedented levels of crime and violence.

The media is losing its control of information.

Political independents saw things they hadn’t seen before. They saw the world as more violent than they previously supposed. That violence posed a personal danger to them and their family. The average voter came to see the Summer of Unrest as also the Summer of Hypocrisy. The moderate voter and political independent noticed that the elite politicians who called for personal disarmament were protected by armed guards. Minorities heard the call to disband the police, but they noticed that the police were the only force that kept peace in their neighborhoods.

This then, is why political moderates walked away from gun control. They saw the media as more biased and less trustworthy. They questioned the political narrative that disarming people who obey the law would lead to peace. They came to doubt that the media or the politicians actually understood or cared about them. All these factors led political moderates to walk away from gun-control.

We are unlikely to go back to who we were.

Political independents began the incremental cascade from being anti-gun to endorsing the right to bear arms. They had to first question and then abandon gun-control. Only then could they allow themselves to be armed. The surge in new gun owners did not cause the rejection of gun-control. The reverse is true.

The body can’t go where the mind has not gone before. New gun owners, particularly women and minorities, are a lagging indicator of support for the right to bear arms. Tens of millions of us rejected the idea of gun-control. Then, after careful consideration, we finally took the steps to select and purchase a firearm.

Millions are still moving along the path from reflexive support for gun control to passionate support for the right to bear arms. These voyagers are rapidly changing our culture. Last month’s public opinion polls are already out of date. The shift away from supporting gun-control is accelerating. The shift toward passionate and committed defense of citizen self-defense will be deep and lasting.

The Ruling Class won’t be able to stop it.

I gave you 1600 words. Thank you for honoring me with your attention. If you found something useful, please share it with a friend and leave a comment. RM

The post Political Moderates Are Walking Away from Gun-Control … For Lots of Reasons appeared first on DailySurge.