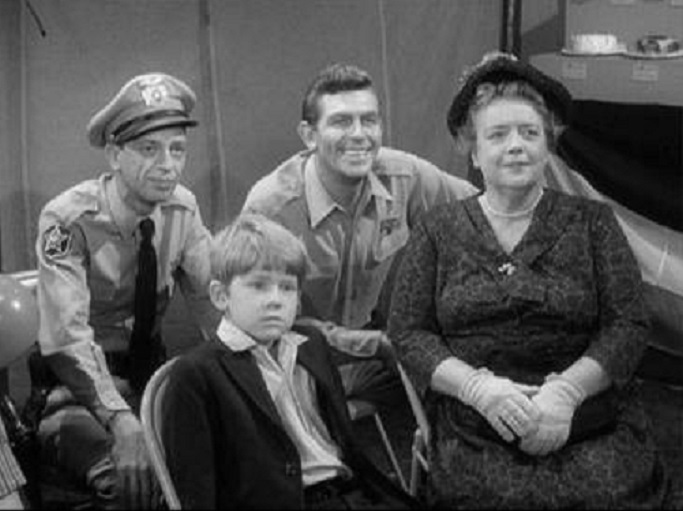 Surge Summary: Journalist Ted Koppel recently provides a segment on ‘The Andy Grifith Show’ and Mt. Airy, NC — Andy Griffith’s boyhood home. His perspectives reflect the general disconnect between the mainstream media and much of what continues to occur in everyday America.

In one of its National Geographic-like expeditions into “everyday America,” the legacy media invaded Mount Airy, North Carolina, better known as Mayberry USA.

Like Mayberry, Mount Airy exemplifies small-town America, and it has embraced its stand-in role with gusto, complete with The Andy Griffith Museum, the Snappy Lunch, Wally’s Filling Station, Floyd’s Barber Shop and lots of souvenirs for sale.

Most of the original cast are now dead, but Betty Lynn, who played Deputy Barney Fife’s girlfriend Thelma Lou, makes an occasional appearance at the museum.

The 13-minute segment was shot in June and aired in September on CBS Sunday Morning. It has garnered nearly 200,000 views on YouTube.com.

Last Thursday, the Washington Post ran a Style section piece about the CBS feature entitled, “They believe in Mayberry but suggest Jan. 6 was staged.”  Wow, what a bunch of hicks.

The runover page headline was worse: “Koppel hears dog whistle themes in the town that claims it inspired Mayberry.”

The term “dog whistle” is how leftists accuse someone of being a racist, which is pretty much everyone to the right of Stacey Abrams.

The recurring theme of Mr. Koppel’s report is that the people who love Mayberry and its values are simple-minded folk who cannot differentiate fiction from reality. They are club-dragging primitives who are racists and still like Donald Trump, which is the same thing.

Mr. Koppel and Washington Post writer Emily Yahr go out of their way to remind us that Mount Airy is not Mayberry. “Its only connection to ‘The Andy Griffith Show’ is that Mount Airy was the real-life Griffith’s hometown,” Ms. Yahr writes. That’s a pretty strong connection, I’d say, even if the TV series was filmed in California.

Mr. Koppel interviews lots of tourists who say they love the show and watch it frequently.

“People looking back at that program seem to confuse the program with what reality was like in those days, wishing that we could only restore some of the good feelings, some of the kindness, some of the decency,” Mr. Koppel says.

He adds this corrective: “What they’re reflecting on is what was going on in the creative minds of a bunch of scriptwriters in Hollywood.” Later, he says, “It captured a reality that never was.” Really? There are no sweet little towns anywhere?

The show is and was phenomenally successful because it has timeless plots animated by virtues still found all over America.

Several minutes into the segment, we see news clips from the 1960s, including the Vietnam War, John F. Kennedy’s assassination, and the civil rights struggle. The implication is that the TV show did not reflect American life in any way; it was just an escape cooked up in Hollywood. They also bemoan that the cast was virtually all-white, which it was until a black coach was added near the end.

They play the “wokeness” race card over and over, even though a black couple is captured on camera exulting over meeting Betty Lynn, and another black family recounts suffering discrimination as late as 1973 but still returning to live in Mount Airy because, “It’s a good place.”

As for the show’s enduring appeal, the overriding themes are reconciliation and redemption, which transcend race and never go out of style. Love, neighborliness, honesty and other virtues abound. The characters actually go to church.

Sheriff Andy Taylor’s son Opie gets moral lessons taught by a loving but firm father. When Opie comes home telling what sounds like a tall tale about a man in a silver helmet blowing smoke rings and walking up in the trees, his father chooses to believe him, citing Opie’s character. “I know Opie,” he says to doubters. The man turns out to be a utility worker (not a spaceman), vindicating not only Opie but his father’s trust in him.

As Solomon wrote in Ecclesiastes 7:1, “A good reputation is better than precious perfume.” Likewise, Proverbs 22:1 says, “A good name is more desirable than great riches.”

The heart of “The Andy Griffith Show” is its Christian sensibility and moral beauty. No wonder the legacy media scorn it.

The CBS segment wraps up with Mr. Koppel aboard a tourist tram, incongruously asking questions about the Jan. 6 Capitol riot, which a couple of people said was “staged.” One person wonders aloud why the media obsess about Jan. 6 while ignoring “cities being burned down every day by protesters.”

Only two out of a dozen raised their hands when asked if they thought the 2020 election was fair. “I think there was a lot of voter fraud,” said one. Several said they don’t trust the media anymore.

The Post’s Ms. Yahr notes that one person asserted that “dead people voted for Biden.” She summarily dismisses this as “a false and debunked conspiracy theory.”

Ted Koppel is not the worst legacy journalist. In fact, he’s been at times more thoughtful than most. In his 1987 commencement address at Duke University, he said:

“In the place of Truth we have discovered facts; for moral absolutes we have substituted moral ambiguity. We now communicate with everyone and say absolutely nothing. We have reconstructed the Tower of Babel. …

“Our society finds Truth too strong a medicine to digest undiluted. In its purest form Truth is not a polite tap on the shoulder; it is a hallowing reproach.

“What Moses brought down from Mt. Sinai were not the Ten Suggestions, they are Commandments. Are, not were.”

Thirty-four years later, Mr. Koppel’s “woke” segment on Mount Airy ends with the tour guide telling him that people come to Mount Airy to get away from nonstop political strife:

“We don’t care what color you are. We don’t even care what your politics are. We just want to be good neighbors and treat everybody alike. And that’s why they’re coming here.”

The passengers yell, “Amen,” and another person says, “That’s what America should be.”

Mr. Koppel concludes: “And when the script was written in Hollywood, that’s the way it was.”

At least, wherever the Christian spirit of Mayberry still lives.

The post Spirit of ‘Mayberry’ Confounds Ted Koppel … and the Rest of the Legacy Media appeared first on DailySurge.