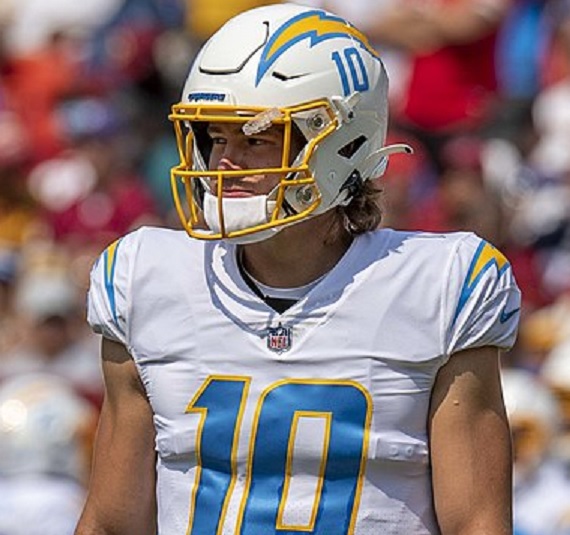 What an incredible year this has been!  Here it is the final week of regulation, and one division each in the NFC and AFC are yet to be decided, as well as nine teams still in contention for the remaining four Wildcard slots, 1st-Round byes and home field advantage up for grabs as well.  Pete Rozelle got his wish.  It was great to see the lowly NY Jets taking it to the defending champs in what I called a ‘gimme’ game, which was anything but and required yet ANOTHER Tom Brady last-minute Herculean effort to secure a comeback win.  He has the patent on that, btw.  It’s in the TB12 Cookbook, available on Amazon…That Bengals/Chiefs game was electric, down to literally the last second.  Let’s hope Big-Throw Burrow is okay, and that his coach’s questionable play-calling at the very end didn’t cost the team it’s stellar QB for the playoffs.  Ja’Marr Chase is…historic.  Speaking of historic, Justin Herbert broke Phillip Rivers’ Chargers single-season td record Sunday, and he’s probably just getting started rewriting Charger records.

It was painful to see the Antonio Brown meltdown on national tv.  My unfortunate premonition is that we will be reading about a tragic ending for him sooner than later, as his mental and moral deterioration progresses without him embracing any kind of accountability.  Not a prognostication I like making as a pundit, but I feel it is imminent.  Last week I finished at 12-4, and 168-87 on the season.  Here’s the picks.

Cowboys at Eagles – Dallas doesn’t really have anything to gain from a road win in Philly, and needs more to stay healthy.  The Eagles are tough against the pass and run, and they get good pressure on the pocket.  Dallas’ run game isn’t very good, putting the game on Prescott’s arm.  A lot depends on whether Myles ‘Colonel’ Sanders plays, but I think Philly’s D holds the fort.  Eagles soar when Dallas can’t score.

Packers at Lions – I just don’t see any way Green Bay drops this closer to the Cryins.  Seems like nearly all the division champs get easy opponents this week, as a reward for clinching (Bucs/Panthers, Bills/Jets, Titans/Texans, Chiefs/Broncos, Bengals/Browns).  Packers have it easy-cheesy in the finale.

Colts at Jaguars – I got Indy double-wrong last week, saying Wentz was out (NFL screwed that with Covid rule changes) and that they beat Vegas (nope).  Carson Wentz has not shown the ability to carry a team, ever.  Frank Reich is a really good coach, but he can’t give Wentz what he doesn’t already have inside him.  Indy goes as far as Jonathan Taylor takes them… which is past the Saguars, but not the AFC title game.

Deadspins at Giants – Ron Rivera keeps his job, as he overcame a lot of adversity this season when his best defenders got hurt, as did his starting QB.  He should have little trouble batting away the NY Compliants, who are a dumpster fire and trainwreck at once.  True to their name, Washington made no name for themselves this year…but the NYG are faceless, which is worse.  Spins skin the Gins.

Bears at Vikings – Two teams who will be without head coaches Monday, rightfully so.  The Purples are the better team, and Fields is out with Covid, which means the Red Relic will be chucking the pimpled pig.  Chicago’s defense is good, but not as good as everybody thinks they are.  Captain Kirk will be boldly going to JustJeff and TyConk, while Dalvin Cooks through DaBears front four.  Both teams are worthy of better coaches, so regardless of this outcome they both win Monday.  Purples put the Bears into hibernation.

Panthers at Buccaneers – This should be less difficult than the Jets game for Tampa.  Carolina has a much better defense, to be sure, and Brady will have to work for it without his best weapons.  But Carolina has no identifiable offense.  No QB, and no McCaffeine to propel them downfield.  Arians’ D won’t have to be world-class to show Matt who Rhules here.  Skulls grab an ugly W at home.

Patriots at Dolphins – Miami got exposed last week in Tennessee, netting a field goal.  The more aggressive Tua gets, the more his stats flop.  The Pats have a possible division title on the line (long shot, I know), and there’s no way in heck two losses to the Dolphins this season is going to sit well heading into the postseason.  New England has the tools, and all the motivation they need.  Playoff Patriots pulverize the Porpoises.

Saints at Falcons – Newsflash: Taysom Hill isn’t the Swiss Army knife on New Orleans.  Alvin Kamara is.  His passing game is as versatile as his running game, and he sees more stacked boxes each year than the Port of Los Angeles.  Add his offensive prowess to that stalwart defense, and Atlanta won’t be the reason the Saints miss the playoffs.  Saints leave Ryan lyin’ on the turf as they defeather the Falcons.

Titans at Texans – Vrabel wants top billing in the AFC.  Just because.  He likes bragging rights, he has propelled his wounded warriors through a grueling season to a great finish, and it looks like DeWreck Henry is on the verge of making them the Super Bowl favorite out of the AFC.  ‘The Titans’ coach….has no reproach….deep in the heart of Texas.’

Steelers at Ravens – Tyler Huntley has earned a starting job somewhere.  Maybe Pittsburgh, now that Big Ben’s locker will be empty.  Both teams have slim shots at the playoffs, depending on what happens in other games.  I think Baltimore’s offense finds just enough oomph to outpace Tomlin’s team. Roethlisberger will want to win his swan song badly, but Harbaugh has done so much with so little this season that you have to want him to at least get a shot at a playoff game.  I do.  Ravens ruin the Riveters.

Jets at Bills – I would LOVE for this to be a spoiler game, with the upstart Jets toppling Buffalo’s division crown at the finish line…but they won’t.  NY gave Tompa Bay all they could handle for 59 minutes, so it would be fun to watch Coach McDermott’s neck veins pop out as his team struggles against a 4-12 laugher.  ‘If wishes were horses, then beggars would ride; if the Jets beat the Bills they’ll have broken their pride.’

Bengals at Browns – Burrow’s out.  Baker’s out.  Mixon’s out.  Heck, who’s IN?  Doesn’t matter a lot.  Cincy has playoff swagger, and Cleveland has questions about their future.  Zac ‘Taylors’ another victory for his Tigers.

Chargers at Raiders – Win and your in for the Bolts, and a maybe for Las Vaiders.  Both teams have been exposed this season at times, but both have shown the ability to bounce back at their best.  That ceiling is a little higher for LA, although their over-reliance on Bosa and Derwin James puts their chances on a knife edge more often than is comfortable.  Flip a coin here, mine says the Chargers beat the house in Vegas this week.  Hurling Herbert hits a straight flush.

49ers at Rams – A closer matchup than you might think.  SF has owned LA the last five matchups.  The Rams have a division to win here.  The Deebo/Ramsey combo will be epic, and we’ll see if LA’s fierce trenchline can contain Elijah Mitchell.  Guys like Aiyuk and Juszczyk tend to factor big in games like this, so the Rams will have to cover all the angles.  It’s a lot of angles.  Stafford won’t get away with 3 picks in this game.  In a battle royale, the Rams’ Kupp runneth over.

Seahawks at Cardinals – This too is simple.  Feathers will fly when these two birds meet, but the Cardinals leave with a victory sweet.