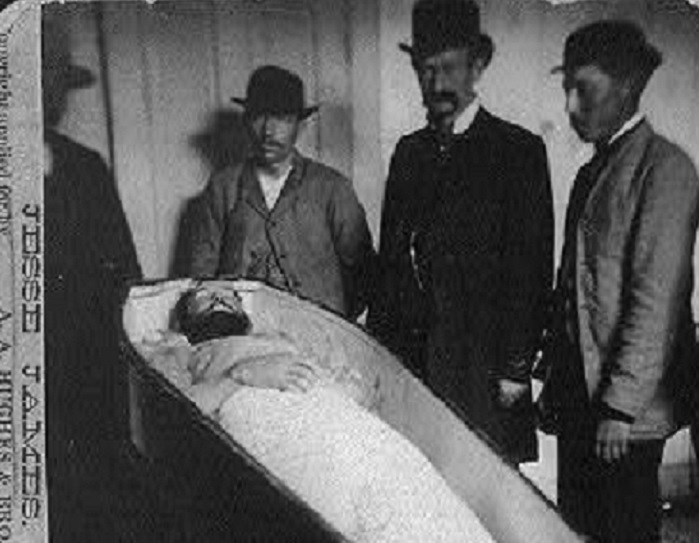 Surge Summary: The murderous life and dubious “Christianity” of bank robber Jesse James remind us of the importance of a nation’s having churches that actually stand up for what they believe — and demand that their members live by it.

Jesse James was a member of a Baptist Church, but he was never a Christian, nor was he a gun-slinging Robin Hood who robbed rich northern banks and trains giving the money to poor southerners living along the Kansas-Missouri border. He and his elder brother Frank were low-down thieves and killers of numerous men.

While Jesse was a member of a Baptist Church, he never experienced the New Birth, and he has been followed by other Baptists up to our day who were deceitful, devious, and despicable people.  Modern Baptists were often wicked and bigger thieves than Jesse, but they are still famous heroes of industry, education, public service, and the ministry.

But they never wore masks and carried handguns. I can think of a few rather quickly:

Some Baptists that swiftly come to mind are oil tycoon J. D. Rockefeller, Modernist preacher Harry Emerson Fosdick, President Harry Truman (Democrat who was as clean as a hound’s tooth), and President Warren G. Harding (Republican who lived like a hound dog). Harding had a 15-year sordid affair and paid hush money to his mistress following his election to the presidency.

Even if Jesse had been a “Robin Hood,” it would not be commendable or mitigate his guilt. The mythical Robin was still a thief, and it is never right to do wrong to do right, and principled poor people would never accept stolen money.

In 1866, at 19, Jesse joined Mount Olive Baptist Church in Centerville, Missouri, with both names changed to First Baptist Church of Kearney, Missouri in 1872. As it appears in the church minutes of November 1867, his name was spelled Jessie. After his last name, the word excluded was added two years later, apparently at his request.

The evidence indicates Jesse was a church member in good standing when he led his James-Younger Gang to rob the Clay County Saving Association Bank in Liberty, a town about ten miles away, on February 13, 1866. Ten miles seems awfully close to home to rob a bank, but thieves don’t qualify for membership in Mensa (I.Q. requirement of 132). The gang made off with more than $60,000 in cash and bonds, more than a million dollars in today’s dollars. Tragically, an innocent boy was killed during their escape.

When the church members heard the next day that one of their members was moonlighting as a bank robber, they knew the Bible and church charter required Jesse to be confronted, followed by his remorse, repentance, and restitution. If he refused, he would have to be removed. The church minutes indicated they were fearful Jesse would burn down the church. The two appointed men never found time to visit Jesse with a Matthew 18 confrontation. However, they were armed with a Bible passage, and Jesse was armed with two Smith & Wesson .45 revolvers.

At the next business meeting, it was revealed that Jesse had not been confronted, and he showed up late for that meeting. He did not want to cause any embarrassment to the church and requested his name be removed from the roll, and the church obliged.

I assume he did not tithe on the loot.

In a church business meeting in 1869, the minutes reveal that the church sent two men to “visit Bro. Jessy [sic] James and ascertain his reasons for wishing his name withdrawn from our church book.” The men were instructed to report the results at the following business meeting, at which Jesse was removed as a church member. The motion was passed with no knowledge of any vote count or discussion.

The church was right and resolute, if not rash, in removing Jesse from the church membership; however, it was an explosive matter, so most people would advise them not to hurry.

Jesse James’ church cannot be faulted for its dealings with him. They did not defend him, nor did they consider him a hero or Robin Hood. Their present pastor takes the same position today.

First Baptist Church had done the honorable and scriptural thing and removed a member who did not live up to his profession. The church action was not one of anger, vindictiveness, or self-righteousness but an act of love. Had Jesse confessed his sins and faced justice, he would have been forgiven and continued in the church fellowship.

And died peacefully in bed rather than being shot in the head.

This is one of the major failures of most churches today: the refusal to deal with hypocrites who refuse to live as they agreed to live when joining the church. Many Roman Catholic Democrats are another excellent example of people who profess one thing and live another. Every politician in Washington should be removed from church membership if they refuse to follow the teaching they agreed to follow when joining their church.

It is outrageous to think Jesse and Frank could attend church on Sunday and rob the Liberty bank on Monday without spiritual repercussions. First Baptist of Kearney is to be commended for its willingness to do the right thing.

Pastor Harris of First Baptist in St. Joseph, where Jesse was killed, refused to host his funeral. Even so, Rev. J. M. P. Martin, pastor of First Baptist in Kearney (that had expelled Jesse), agreed to do so at the request of Jesse’s mother, a former member and Sunday School teacher.

As reported in the June 11, 1882, edition of the New Orleans Daily Picayune, Pastor Harris said, “Jesse James was not a member of any Baptist church [at the time], Baptists did not weep at his funeral, and a Baptist minister did not eulogize him.” Pastor Harris of First Baptist, St. Joseph, was taking the heat from unfair, uninformed, and untruthful Baptist critics.  Jesse was buried in the church cemetery after his original burial on his family farm, where his mother gave guided tours to paying customers.

My research indicates that Frank and Jesse, along with the Younger Brothers and other members, were doubtlessly killers and thieves. That is also true of Quantrill’s Raiders and “Bloody” Bill Anderson. However, some declare they were patriots who refused to recognize Lee’s surrender at Appomattox, choosing to carry on a guerrilla war against the Union. Their robberies were to finance an uprising of the Confederacy. That theory is as outrageous as the Robin Hood myth.

Cole Younger admitted in his autobiography that his brothers, Jim and Bob, sang in a church choir in 1870 and 1871. After 25 years in prison for a Minnesota bank robbery, Cole was paroled in 1901. During a hot August night at an evangelistic meeting, Cole kissed his niece on the cheek, raised himself from his chair, and walked down the church aisle while the choir sang the famous hymn Just as I Am, Without One Plea But that Thy Blood Was Shed for Me.

Cole Younger hit the sawdust trail on the 50th anniversary of Quantrill’s raid in Lawrence, Kansas, and spent the next 13 years telling people about Christ’s saving and forgiving power.

The ridiculous theory of the gangsters being patriots instead of thieves was woven out of whole cloth. But it gets even weirder as Jesse and Frank are said to have been dedicated church members, with Frank teaching a Sunday School class and Jesse even serving as pastor under an assumed name! With everyone in the county knowing who he was.

A highly qualified author and acquaintance of mine Dr. Edward DeVries took the above view in the January/February 2020 Barnes Review article. He even declares that Quantrill and “Bloody” Bill Anderson were “born again Christians.” Of course, all Christians are born again.

DeVries declares, “At different times, Jesse would pastor the New Hope Baptist, Providence Baptist and Pisgah Baptist churches that had been pastored by his father before him. He would also pastor the Samuel’s Depot Baptist Church in Kentucky and, for a time, even fill the pulpit for a Methodist church.”

Extraordinary charges require extensive evidence that the author does not give; however, it must be understood that Dr. DeVries had preached and spoken in the three Missouri churches. Moreover, his honesty and ability are without question, in my opinion.

Like many modern Baptists, Frank and Jesse were not held down long enough at their baptism, as I humorously say. The issue is not baptism but belief in a resurrected Christ.

Frank, Jesse, and their family discovered too late that it is better to have never been born than not to have been born again.

(Dr. Don Boys is a former member of the Indiana House of Representatives who ran a large Christian school in Indianapolis and wrote columns for USA Today for 8 years. Boys authored 20 books, the most recent, Reflections of a Lifetime Fundamentalist: No Reserves, No Retreats, No Regrets! The eBook is available at Amazon.com for $4.99. Other titles at www.cstnews.com. Follow him on Facebook at Don Boys, Ph.D., and visit his blog. Send a request to DBoysphd@aol.com for a free subscription to his articles and click here to support  his work with a donation.)

The post Jesse James: No ‘Robin Hood’, No Baptist Pastor, No Christian – But Warning to Many appeared first on DailySurge.