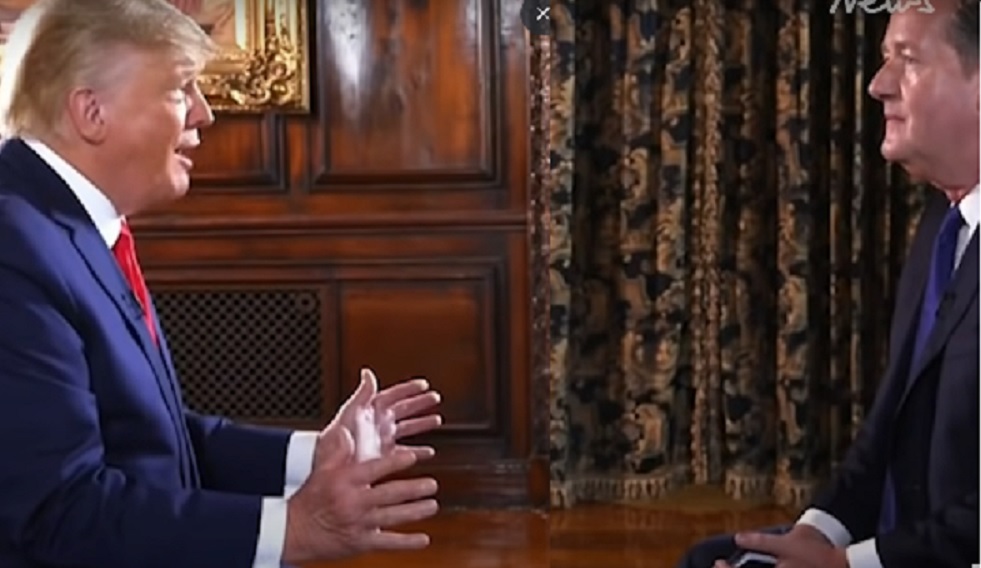 Surge Summary: Deceptive editing of a recent interview by Piers Morgan of Donald Trump confirms the necessity – every time – of following the rule of “trust but verify” when evaluating anything released by the media.

When it comes to media reporting today, the saying, “Don’t trust, verify” has never been more relevant. Quite literally, you simply cannot trust what you read or even see without digging deeper and verifying. All the more does this seem to be the case when it comes to Donald Trump, who is on the front pages again after his interview with Piers Morgan.

Yes, “DONALD Trump stormed out of a world exclusive interview with Piers Morgan in a blazing row over the ‘stolen’ US presidential election.

“The ex-President reached boiling point after Piers blamed Trump’s refusal to admit defeat in the 2020 vote for last year’s deadly riots at the Capitol.”

If you didn’t believe the article, you could simply watch the video highlights. Trump was guilty as charged.

Only it appears that he wasn’t – at least, when it comes to him storming out of the interview in a rage.

As other news outlets have reported, “Audio provided by former President Donald Trump’s team to Breitbart News of the end of Trump’s interview with Piers Morgan proves that Morgan and his team deceptively edited the interview to make it appear as though it was a contentious ending when it was not.

“A 30-second promotional clip that Morgan released on Wednesday afternoon seemed to show Trump flying off the handle and walking out mid-interview as a righteous Morgan asked him tough questions about his views on the 2020 election. But the full story seems to indicate that Morgan’s team deceptively edited the clips together to make it as nasty as possible for Trump—and to drive up the ratings for Morgan’s new show.”

Specifically, “Trump spent more than an hour with Morgan, and the way the promo clip cuts together what it calls ‘Morgan Versus Trump’ moments to promote the interview which will air on this coming Monday night is particularly deceptive. Most of those moments had nothing to do with the election issue at all, and the full audio of the last bit of the interview shows that Trump standing up and walking away and saying ‘turn the camera off’ came after Morgan ended the interview and thanked Trump for a “great interview.”

The audio recording of the last 7+ minutes of the interview, provided by Trump’s team, seems to confirm this scenario, reminding us again of the need to verify before trusting.

But that’s just the beginning of the apparent misreporting and deception.

The Sun claimed that, “Trump screamed that his interviewer was ‘dishonest’, ‘a FOOL’ and barked at the shocked TV crew: ‘TURN THE CAMERAS OFF!’”

And, we are told, “Piers tells how the President stared at him with ‘undisguised fury’ and was ‘almost foaming at the mouth’.”

But when you listen to the audio of the interview, you hear something very different.

Trump certainly did have some harsh words for Morgan, but they were spoken very calmly, in typical Trump demeanor. And he did not “scream” that Morgan was dishonest nor did he “bark” at the camera crew. Listen to the audio for yourself, linked in the article here.

Based on the audio tape, Morgan wanted to ask Trump one more question before they were done, wanting him to tell the story about getting a hole in one while golfing recently with former great Ernie Els.

After recounting the story, Trump and Morgan laughed together and Morgan thanked him for a great interview. Then, with everything done, Trump said to the crew, “Turn the cameras off.”

That’s it. Nothing explosive. Nothing out of control. Noting spoken in a fit of rage.

Just some laughing together about the golf story, some mutual appreciation for the interview, and a simple, “We’re done” (as in, “Turn the cameras off”).

So, in this case, what you saw (the video) and what you read (the article) was terribly misleading.

Do not trust, but verify!

It could be that Trump said some stupid things in the interview. It could be that he made himself look bad with some of his comments. And he certainly had some harsh things to say about Morgan.

But the way things were presented in major news headlines and the way the video was edited gave a very false impression.

Unfortunately, this happens every day of the week, as alleged news reporting puts a dramatic spin on things, shaping the way you will hear and see them.

How many articles have you read about “the internet exploding” after a certain event or comment, only to find out that several people on Twitter had something to say?

Or how many times have you seen headlines about an embarrassing moment for a politician, only to learn that the embarrassment was primarily in the eyes of the beholder?

A few years ago, I was asked to film an interview for a major cable TV channel about a controversial cultural issue. I agreed to come on if the interview was aired live, but they told me it would be prerecorded.

I then requested that my ministry would be allowed to video tape the entire interview for our own archives, not to air publicly (we would put this in writing) unless they deceptively edited the interview.

Not surprisingly, they declined, because of which I declined the invitation.

I had seen what happened to some of my colleagues where the deceptive editing was completely over the top. (I’m talking about showing the person smiling laughing after being asked about something like the Holocaust or slavery in America, whereas they had spliced in the laughter from a different segment.) I was not going to let that happen to me.

But it is not just this particular channel that was guilty of deceptive editing (or reporting). This misreporting is rampant today, often right in front of our eyes, without us having the slightest clue.

So remember to verify the details carefully before trusting. The deception is only going to get worse.

The post Piers Morgan Treatment of Trump Interview Confirms: When It Comes to Media Always Trust but Verify appeared first on DailySurge.