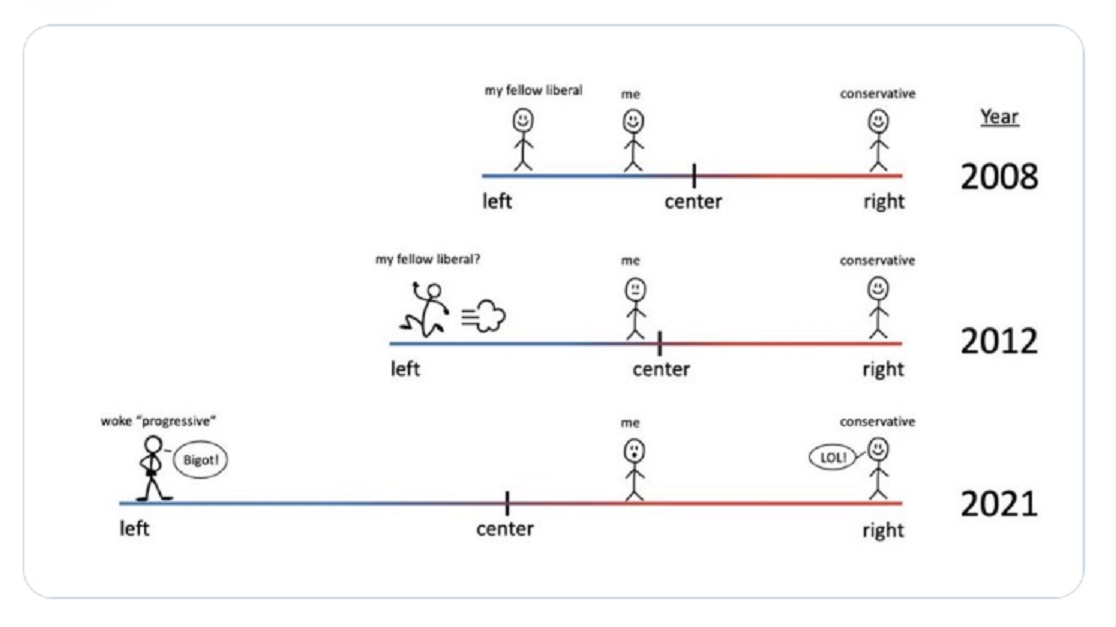 Surge Summary: The once standard-issue liberal Elon Musk is currently demonstrating as the Left takes over the Democratic party that political movement is self-destructing.

What can we learn from Elon Musk’s apparent shift to the right in his politics? From his perspective, as illustrated in his stick figure tweet, he has not shifted at all. Instead, the left has veered further left, because of which, by remaining stationary in his own views, it is perceived that he has moved to the right.

His graphic reminded me of an illustration I used for many years while preaching, holding the Bible high in my right hand and using my left hand to represent the state of the society.

“As a result, within a couple of generations, things are acceptable in our own homes as believers that would have been detestable in the homes of our non-believing grandparents.”

Put another way, unless we actively swim against the tide of the worldly culture, we will find ourselves drifting in the wrong direction. We will simply be carried by the current.

Musk’s point is similar yet different, especially since it is not related at all to a faith standard or a biblical belief.

Instead, it illustrates just how far to the left the “progressive” mindset has shifted. As the saying goes, “Today’s Democratic Party is not the Democratic Party of Bill Clinton.” (Do you remember when the Democratic mantra concerning abortion was, “We want abortion to be safe, legal, and rare”? How would that play today?)

Most of my Jewish relatives and friends from childhood are Democrats today, some of them quite staunchly.

Yet a few of these old friends are not, and when I interacted with them on social media, asking them what happened, their stories were the same.

Now, some of them are more conservative politically than I am.

To be clear, and as I’ve said almost endlessly over the years, my hope is not in a political party. And, while I virtually always vote Republican, I am registered as an Independent just as a personal matter of conscience.

Yet no one cannot deny that, for those of you who identify as liberal or progressive or Democrat, the ground has shifted under your feet. And if you remain stationary, you have now moved to the right.

Some of this shift happened right before our eyes during the Democratic presidential debates, as candidate Biden moved further to the left on abortion, saying he would no longer support the Hyde Amendment. It was either that or distance himself from his increasingly pro-abortion party. At least that was his perception. (As reported in the New York Times, “Joe Biden Denounces Hyde Amendment, Reversing His Position.”)

Getting back to Musk, Lee Brown wrote in the New York Post, “Billionaire Elon Musk insists he is a liberal — but is viewed as a far-right ‘bigot’ because ‘woke progressives’ are pushing the left to extremes.

“The world’s richest man used his new $44 billion purchase, Twitter, to share a simple stick-figure illustration Thursday highlighting his position in the dramatically shifting political landscape over the last 14 years.

“A smiling figure named ‘me’ starts standing left of center close to a ‘fellow liberal’ in 2008, when Barack Obama was first elected president

“But by 2012, when Obama was reelected, Musk’s fellow liberal is drawn racing off to the extreme left — so fast that the figure leaves a gust of air.

“Musk’s ‘me’ remains in the same spot — but appears even closer to the center because of the gradual shift left.

“By 2021, when President Biden entered the White House, Musk’s fellow liberal is now a ‘woke ‘progressive’ who is so far left it has completely rewritten the boundaries.”

Exactly so. The left’s radicality is destroying its base.

Not only so, but as many as have noted, the left is continually eating its own. As I recently pointed out, “It is a biblical principle that everything reproduces after its own kind. Generosity begets generosity, kindness begets kindness, hatred begets hatred, and cruelty begets cruelty.

“When this principle is applied to the cultural elitism of the left it is inevitable that, over time, the left will eventually devour itself. That’s because cultural elitism is based on a self-righteous judgmentalism which, in turn, begets even more self-righteous judgmentalism. And so, by its very nature, the circle gets smaller and smaller until the ally of today becomes the enemy of tomorrow.”

As I concluded, “The silver lining in all this is that, over time, the radical left will cancel itself. Just give it enough time.”

It’s the same with the continuing shift to the radical left. Over time, it will leave the vast majority of Americans behind, since the left’s extreme woke agenda is non-sustainable.

As a result, in the end, there will be a lot more people just like Elon Musk. The woke agenda will leave them behind.