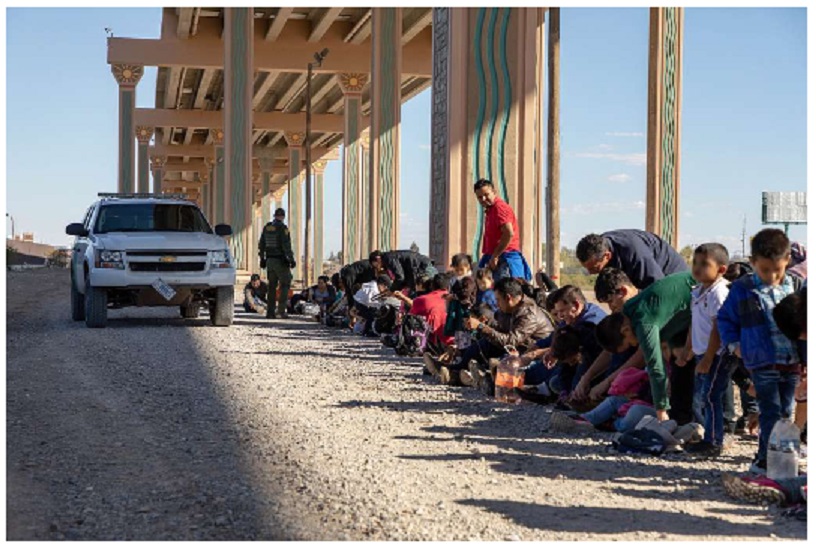 Surge Summary: Calls from well-meaning Christians for America to open her borders to any and all comers are mixing up the role of the church and the state. The former is to reach people with the Gospel; the latter is to provide security for the well-being of the nation and those who live within it.

Biden’s border crisis is dangerous to the well-being of millions of people, and it may soon get worse.

But his Secretary of Homeland Security, Alejandra Mayorkas, paints a rosier picture, “We are preparing for the end of Title 42….We continue to enforce the laws of this country.”

Title 42 is a provision from the Trump era in the wake of the COVID-19 pandemic that, until potential immigrants are tested and shown to not have the virus, they should remain in Mexico.

Biden has promised repeatedly to lift this provision, abandoning testing and opening the floodgates. But for now, his plan to abolish Title 42 has been blocked by a Trump-appointed judge.

Meanwhile, Sen. Roger Marshall (R-KS) told Maria Bartiromo of Fox News Channel’s Sunday Morning Futures on 5/22/22 that the border crisis is acute. Marshall has visited the border and wants the president to do the same.

The senator said: “Maria, this is a human tragedy here…At nighttime, it looks like a war zone. There’s a sea of humanitarian crises here every evening. And every day, it’s lived out as well.”

Title 42 is scheduled to expire 5/23/22. The Center for Immigration Studies notes, “Title 42 is the only thing standing between the current chaos at the Southwest border, and no border there at all.”

The numbers of illegal immigrants swarming in is staggering. Writing in the Washington Examiner (5/19/22), Paul Bedard noted: “Last year’s 1.7 million border encounters is expected to reach 2.1 million, according to Princeton Policy Advisors, an economic analysis outfit that has correctly predicted recent border surges.”

The Constitution says it exists to “insure domestic Tranquility, provide for the common defense, promote the general Welfare, and secure the Blessings of Liberty.” Do open borders for any nation help achieve such lofty goals?

Some open borders advocates essentially imply that it’s the “Christian thing to do” to open the borders and help everyone who just wants a better life for themselves and their families. That’s understandable, but do people who hold such a view lock their own doors at night?

Rev. Erwin Lutzer, the author of We Will Not Be Silenced, told our D. James Kennedy Ministries television audience: “One of the big mistakes that Christians sometimes make is that they want to apply the ethics of the church to the state. I heard a pastor saying–I’m sure that he was compassionate and meant well –when he said, ‘Of course, we should invite people into America and basically have open borders because after all the gospel is for everyone.’ Yes, of course the gospel is for everyone, but that’s not the role of the state. The role of the state is to keep order, to punish crime, and to keep its citizens safe. That’s the role of the state.”

Meanwhile, critics of Biden’s open border crisis note that known terrorists are sneaking into the country—more than 40 on the terrorist watch list slipped into the US last year alone.

Also, human trafficking is taking place, and drugs are pouring in in record numbers. In fact, Chinese-produced fentanyl and other drugs are being smuggled in through the southern border, and the results are making headlines.

Earlier this year, The New York Times reported (2/13/22), “Drug overdoses now kill more than 100,000 Americans a year—more than vehicle crash and gun deaths combined.” The open borders cause this problem, or at least greatly exacerbate it.

Kerby Anderson, the host of the syndicated radio program “Point of View” (celebrating its 50th birthday this year), recently told our D. James Kennedy Ministries television audience: “There is a push right now by various progressives that are convinced that we want to bring in all sorts of people across the border.”

Anderson noted, “I think the hope is that these might be future Democratic voters. And so what we’ll do is we’ll just kind of incrementally allow non-citizens to vote.”

Interestingly, 15 municipalities across the country will allow noncitizens to vote in 2022. Anderson adds, “You have about 800,000 individuals in New York city can do that. [And] we, for many years, allowed individuals to vote in the local elections in the San Francisco area as well. But you can see the trend. What is done in a very small, almost incremental way in San Francisco or in New York City could happen to the rest of the country. And that’s why we need to pay attention.”

Sen. Marshall, who said our border is like a “war zone” right now, noted that the public safety department of Texas is trying to hold the line: “All of those people are doing their best, but they’re just simply overwhelmed. This is an unsustainable crisis.”

The post There Is a ‘Christian’ View on Open Borders – but It Might Not Be What Many Think appeared first on DailySurge.