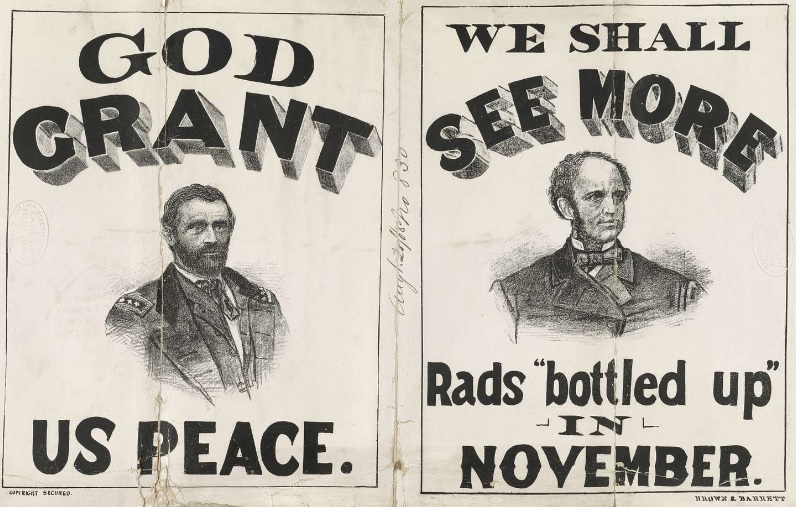 Surge Summary: The wise actions of President Ulysses S. Grant and events of his era remind us of some of the things happening today … warnings and reaffirmations.

I’ve just recently finished reading “To Rescue The Republic Ulysses S. Grant The Fragile Union, and The Crisis of 1876” by Bret Baier with Catherine Whitney.  My mother-in-law always gets me a book or two for Christmas, and this was last year’s gift.  I finally got around to reading it last month, since I’m one of those people with a giant “I will eventually read this” list. I’m glad I finally got to it.  It’s extremely well written and very informative.

Outside of knowing that U.S. Grant was a Civil War general and was President after Andrew Johnson, I hadn’t known much about him.  Of course I’d read some of the accusations of him being a chronic drunk but Baier and Whitney’s extensive research put that into perspective.

Grant was a man of humble beginnings and until the military, he had his share of business failures.  He was known for his calm demeanor, his kindness and generosity, was not pretentious and was extremely uncomfortable speaking in public.

The phrase “Let Us Have Peace” was used as a campaign slogan for Grant’s first presidential bid in 1868.  The saying comes from a letter he wrote accepting his nomination.

The division and national wounds that the Civil War caused didn’t heal immediately when the war was over.  To some extent, it could be said that some of these wounds have never healed.

What some historians call the Era of Reconstruction began with the ratification of the 13th Amendment that abolished slavery, on Dec. 18, 1865.  The 14th Amendment, granting citizenship to all people born within the U.S., was ratified July 28, 1868, after Grant accepted the nomination to run for President at the Republican National convention held May 20, 21, 1868.  The last of the Reconstruction Amendments, the 15th which granted the right to vote to blacks, was ratified on Feb. 3, 1870.

It was during this beginning period of Reconstruction that the 1868 Presidential campaign was conducted.  While Republican Grant ran a campaign advocating for continued peace after the war, his Democrat opponent, New York governor Horatio Seymour, went in an entirely different direction.  Focusing on states’ rights and not national concerns, the Democrat’s campaign slogan was “This Is A White Man’s Country; Let White Men Rule”.

The Democrat lead South continued their animosity to Reconstruction during the nomination and eventual election of Rutherford B. Hayes.  Things got so bad that while Grant was still in office, his Secretary of State Hamilton Fish wrote “…the language of the Democrats now was more desperate and more threatening and violent than that of the Southern men on the election of Lincoln in 1860.”  (p. 267, To Rescue The Republic, by Baier and Whitney)  This type of animosity and even outright violence is what lead to Democrat-led southern states creating the various Jim Crow laws that existed well into the 20th Century.

I don’t know who originated the phrase “the more things change, the more they stay the same”, but consider how Democrats are acting now.  We have verbal and physical threats against Supreme Court Justices, impeachment proceedings against a sitting President because he made a phone call, a weaponized tax system, and a two-tiered justice system tilted against conservatives and conservative issues.   It’s empirically accurate to say that when Democrats don’t get their way, they will go to any length to achieve power. Intimidation, slander, even murder and the destruction of the entire Republic isn’t off the table for them.  In fact, that’s the history of the Democrat Party.

The last chapter of “To Rescue The Republic” is entitled The Meaning of Grant’s Life…Then and Now.  Baier and Whitney quote historian Eric Foner regarding Reconstruction:  “Reconstruction poses a challenge to American’s historical understanding because we prefer stories with happy endings.”    (p. 331)

Many historians regard reconstruction as a failure due to how it was implemented and subsequently thwarted by Democrats.  Even though the 13th, 14th, and 15th Amendments were ratified during this period, Democrats actions before, during, and after the Civil War were nothing but attempts to circumvent our Republic.  Jim Crow laws, affirmative action, and now equity instead of equality is a blatant continuation of these actions.

In closing, Baier and Whitney say this: “The freedoms we cherish aren’t automatically given.” (p331) ”In the long stretch of history, we can see both the majestic peaks and deep valleys of our nation’s journey.  But like Grant, we have never stopped seeking union.”  (p. 333)   I highly recommend this book.

Now For Something Completely Different…

I came across a very interesting word a while back.

Wonder if this rather old word could have a current application?   Hmmm…just thinking out loud.

We’ve finally been able to post a new video on our YouTube page in support of the CD, “SALT 2: Trophy Hunting For Unicorns”.  This is a “live in studio” version of the tune “Anachronistic Anachronism”, written by Dan Leu and Shawn Browning.  This is a rockabilly tune and we’re a progressive rock and jazz band.  But hey, it’s prog rock which means we can pretty much do whatever we want.  Therefore, if you’re looking for music just a bit different, please check this out.  As always, thanks for your indulgence and support.

The post From Pres. Grant vs. Democrats: More Things Change, the More They Stay the Same appeared first on DailySurge.