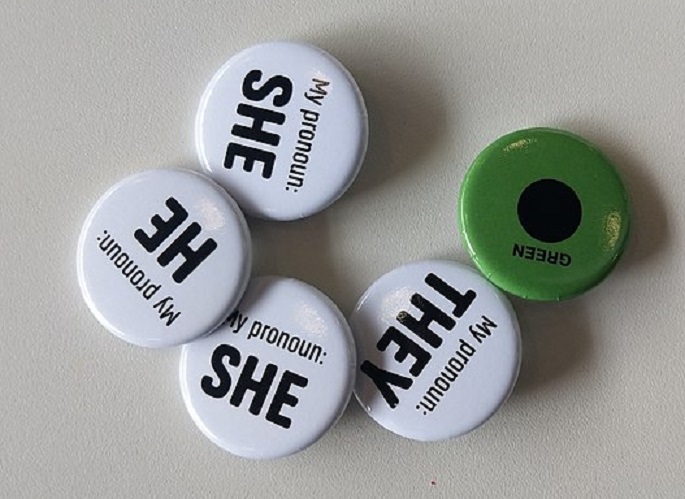 Surge Summary: Pronoun bullying is invading America’s education establishment – even in the Midwest. Teachers, parents and students must refuse to cooperate with this indoctrination.

Insanity over pronouns has hit the Midwest. Children and teachers are being pressured to declare their pronouns and parents are livid.

In the Olentangy school district near Columbus, a middle school language teacher required all the students to stand up and declare his or her pronouns. A high school teacher in that same district told the class to let her know if she should change a student’s pronouns when contacting parents.

In the Dublin (OH) City Schools, a class of elementary students was asked to name their individual pronouns. At Hilliard Davidson High School (a Columbus suburb), teachers are called to the principal’s office and forced to apologize to a student if an unwanted pronoun is used. At that same school, an assistant principal now signs his correspondence with “he/him” following his name.

How long before children are called to the principal’s office for being unwilling to state their pronouns? Or will all of our children go along with this? They will unless their parents spell it out for them.

T-Y-R-A-N-N-Y is what’s going on here. The “LGBTQ” folks are serious about obliterating “heteronormativity” and your children are their change agents.

Is it any wonder three percent of Ohio public school students have been removed in the past two years [53,000 students]? And Christian and Catholic schools are bursting at the seams?

Of course, pronoun insanity is already law in New York City, where “malicious” pronoun misuse by an employer or landlord can result in high fines.

But most of the country is still in touch with reality– or so we thought. And little kids were, until recently, still spared from the “LGBTQ” bizarro fantasy world.

What I am wondering is, how long before this is a required identifier after each child’s name in not just a few, but most public schools? While we were frustrated about masks, special interest activists have been hard at work, securing lavish Biden administration American Rescue Plan funding for “safe re-opening” (i.e., “make sure all the radical agendas are set in stone”). In Ohio, $6.5 billion has been distributed from federal sources. Money, money, money!

Now, a flood of recent “diversity, equity and inclusion” staff positions have been filled to enforce uniformity, partiality and exclusion. And a slew of counselors and social workers have been hired for “social emotional learning” initiatives, so radical teachers are empowered and loaded for bear.

You, conservative Christian parent, are the bear. Do not mess with us while we tutor your child and his teacher in the ever-expanding perversion lexicon of invented human categories like “non-binary, gender fluid, gender queer, two-spirit” to replace “male” and “female,” which are said to be “sex assigned at birth.” Reality is just too threatening, apparently.

Here’s what one Ohio mom wrote to me: “My son was surveyed by computer as to how he identified sexually by asking him to provide his preferred pronoun.” These parents were not notified in advance that their 12-year-old would be asked this question.

Unless outspoken parents can roll this back, pronouns will be a new form of passport affirming that a child is “ready to learn” (aka, ready to be indoctrinated). Yet who among our bravest will stand up and say, “I refuse”? Because it really has to be done, by brave young warriors at as many schools as possible.

This is not just a manipulative way to compel acceptance of gender deviance, but it’s also an assault on our common language. One presenter at a recent teacher training workshop in Hilliard schools, an open advocate of homosexuality and gender deviance, mused that some activists globally are pushing to change languages that have embedded gender cases– for instance, French. And to her, this is a good thing.

Many French-speakers are rebelling against linguistic activism because it unnecessarily complicates the language as an article in Forbes explains: “France doesn’t have a pronoun for ‘they’– in the third person plural, people must choose between the masculine ils or feminine elles.”

And even though radicals are pushing for a “non-binary” French pronoun like “iel,” it hasn’t happened yet, not even in Canada—unless progressive dictator Justin Trudeau will force this on his country, too.

In the U.S, activists persuaded Merriam- Webster to adopt “they” as a singular pronoun, and the dictionary publisher declared it the “word of the year” in 2019.  Sigh.

But do children have to be forced to use such nonsense? Clear language reflects clear thinking.

Back to Ohio. Teachers in Parma schools, Hilliard schools and Mariemont schools have been tutored in pronoun nonsense, with valuable professional development time spent on the nuances of using mythological pronouns like “ze/zir” and so on. The Mariemont presenter, who appears to be a female, goes by pronouns “they/them.”

In Hilliard, teachers were instructed to engage in an exercise where they introduced themselves to one another adding their pronouns after their names. Many cooperatively went along with this lunacy.

Those who cooperate with pronoun tyranny are affirming the following:

Be sure this is okay with you. If it is, may God open your eyes and soften your heart.

If it’s not, then get ready to stand on your convictions— and show our children how they can do the same.

The post Pronoun Passports Could Be on the Way in America – with Public Schools Paving the Way appeared first on DailySurge.