President Donald Trump argued Monday that he should be declared the winner of the 2020 election, citing fraud and election interference by the FBI, how might that impact the coming ‘Red Wave’ in November?

If you have been following the news lately, you see three curious things taking place. The first thing you see is a massive and obvious collusion between the news media and various branches of the United States government to take down Donald Trump, by any means necessary, fair or foul. The second thing you see is Donald Trump making nonsense statements about being “re-installed” as president, something that wouldn’t happen even if evidence of election fraud finally surfaces. The third thing you see is the FBI and the DOJ intentionally ignoring the smouldering tinderbox that is Hunter Biden’s laptop. Any one of these things would be bad on their own, but all three together portends disaster.

“When the righteous are in authority, the people rejoice: but when the wicked beareth rule, the people mourn.” Proverbs 29:2 (KJB)

You don’t have to be a prophet to see that the upcoming Midterm Elections are going to be an ugly, ugly process, with neither side coming away happy. The media has been relentlessly firing off articles castigating Trump, articles dutifully picked up and reposted by such high-volume sites as The Drudge Report and Mediaite. But Donald Trump for his part, spewing nonsense and showing he has little to no understanding of how the legislative process works in America, is not helping him at all. When I look at all of it from a 35,000 foot-high view, the Democrats, Republicans and the media, it’s like watch the inside of an unregulated mental institution, with the patients biting and devouring each other. This is America on Day 897 of 15 Days To Flatten The Curve, and it’s not a pretty picture, not in the least bit. 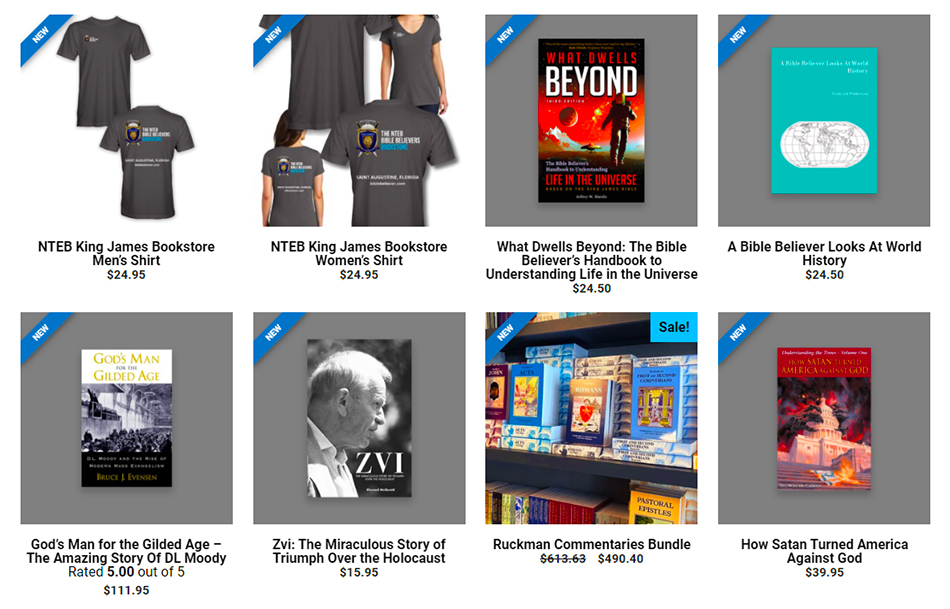 CLICK TO SEE SOME OF THE DOZENS OF NEW ITEMS AVAILABLE AT THE BOOKSTORE, INCLUDING THE OFFICIAL NTEB BIBLE BELIEVERS BOOKSTORE T-SHIRT!!

FROM BREITBART NEWS: The former president pointed to reports that the FBI worked to bury the story about Hunter Biden’s laptop on social media right before the 2020 election.

“This is massive FRAUD & ELECTION INTERFERENCE at a level never seen before in our Country,” Trump wrote on social media.

Trump said the FBI purposefully tried to stop him from winning the 2020 election.

“REMEDY: Declare the rightful winner or, and this would be the minimal solution, declare the 2020 Election irreparably compromised and have a new Election, immediately!” Trump wrote.

It is unclear how a presidential election would be declared fraudulent and redone through the court system, and unclear whether it is even permissible by the Constitution.

Facebook’s founder and CEO Mark Zuckerberg revealed in an interview with podcaster Joe Rogan that the FBI warned his company of an imminent “dump” of “Russian propaganda” putting them on “high alert” right before the Hunter Biden laptop story broke in the days before the 2020 election.

The FBI did not deny Zuckerberg’s story.

Facebook censored the story as disinformation right before the 2020 election although it ultimately proved to be factual.

“Yeah. I mean, it sucks. I mean, it turned out after the fact, I mean the fact-checkers looked into it, no one was able to say it was false, right?” Zuckerberg admitted to Rogan. “So basically it had this period where it was getting less distribution.” READ MORE

Will Donald Trump be president again?

Despite losing in 2020, Donald Trump has managed to strengthen his grip on the Republican Party. Will he run again for president—and if so, could he win?

CLICK TO HELP US SEND KING JAMES BIBLES IN ENGLISH AND SPANISH TO INMATES IN JAILS AND PRISONS WHO DESPERATELY NEED THEM!!

But whatever you do, don’t do nothing. Time is short and we need your help right now. The Lord has given us an open door with a tremendous ‘course’ for us to fulfill that will create an excellent experience at the Judgement Seat of Christ. Please pray for our efforts, and if the Lord leads you to donate, be as generous as possible. The war is REAL, the battle HOT and the time is SHORT…TO THE FIGHT!!!

“Looking for that blessed hope, and the glorious appearing of the great God and our Saviour Jesus Christ;” Titus 2:13 (KJB)

The post As Trump Demands That He Be ‘Re-Installed As President’ Due To Election Fraud, Fears Of A Dematerializing ‘Red Wave’ Are Growing By The Day appeared first on Now The End Begins.