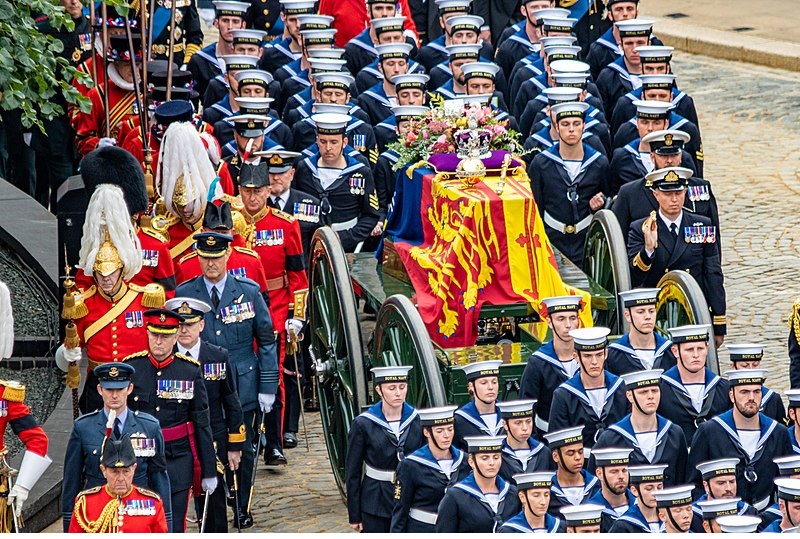 Surge Summary: To Americans, the notion of royalty seems foreign and even uncomfortable. But the recent focus on Queen Elizabeth  reminds us concepts of kings, rulers and majesty has its place, especially in the lives of Christians who believe in a God Who is the King.

I caught only a few moments of the state funeral of Queen Elizabeth, but those moments were very powerful, as a Christian cleric read the description of the new heavens and earth from Revelation 21. What a majestic portion of scripture!

Adding to the majesty of the moment was the majesty of the setting, as the funeral took place in Westminster Abbey, and the Christian leader wore his clerical robes as he beautifully intoned the Word of God. And, of course, it was a funeral fit for a queen, apparently with the largest number of international leaders and dignitaries ever assembled at one place and time.

But this scene got me thinking as well.

Here in America, we’re not used to the pomp and ceremony, while the very concept of royalty is foreign to us, not to mention seemingly outdated. Kings and queens today?

Several years ago, while ministering in England, a pastor said to me, “I’m so glad we have a queen.”

I could not relate to his statement at all. Why are you glad to have a queen? What does that add to your life? Isn’t the whole concept a little silly?

Yet for most of human history, royal figures have been the norm. And, throughout the Bible, God is presented as the King par excellence, while kings and rulers are honored, especially the good ones.

As for God Himself, worship of this King was couched in awe and majesty, with the Tabernacle, then the Temple, meant to produce feelings of reverence and holy adoration. The place where God manifested Himself was to be treated with the utmost respect.

But that, too, is foreign to many of us who do not come from high church backgrounds, meaning churches that emphasize liturgy and the sacraments and clerical ministry. These kinds of churches are more likely to recite biblical passages and historic creeds, to sing (or chant) the old hymns, and to meet in historic, beautifully crafted buildings.

This would be in stark contrast to many contemporary churches that meet in high school auditoriums, that feature drums and electric guitars, and that have leaders who are dressed as casually as the rest of the congregants attending.

But I don’t say this to be critical of those who wear robes or to denigrate the rich heritage of church (and synagogue) liturgy. Not at all. Instead, I say this to explain how foreign these beautiful cathedrals and clerical displays are to me, just as the concept of current day royal figures is foreign to me.

At the same time, for many years now, I have been acutely aware of the lack of reverence for God often found in our contemporary Christian circles, the lack of awe, the lack of wonder.

I have been deeply concerned about our spiritual shallowness, about our skin-deep commitment, about our lack of historical perspective.

In short, I have been burdened by our lack of a real God consciousness, the type that comes from being still in His presence, from meditating on His Word, from focused, reverential worship.

Yet it is our view of God that determines who we are as human beings. As A. W. Tozer (1897-1963) said, “What comes into our minds when we think about God is the most important thing about us.”

As for Tozer himself, Leonard Ravenhill (1907-1994), who was his close friend, recalled him saying, “There are occasions when for hours I lay prostrate before God without saying a word of prayer or a word of praise – I just gaze on Him and worship.”

Ravenhill shared this with me personally, as he and I became close friends the last 5 years of his life. Ravenhill’s spiritual depth challenged me to the core as well, as he had a certain heritage that seemed so foreign to our shallow, contemporary, spiritual culture.

To be sure, I’m still more at home in dressed down settings than with robes, more at home with lively music than with chanting, and with spontaneous worship more than liturgy. We can encounter God with reverence and awe in those settings as well. The structure of the building does not determine the depth of our worship.

But let us be sure to leave room for majesty.

For holy fear. For veneration.

We serve a majestic King. May our lives and attitudes and worship reflect how great He is.

The post In Our Sometimes-Too-Casual Age … There’s a Place for Majesty, Royalty, Awe appeared first on DailySurge.