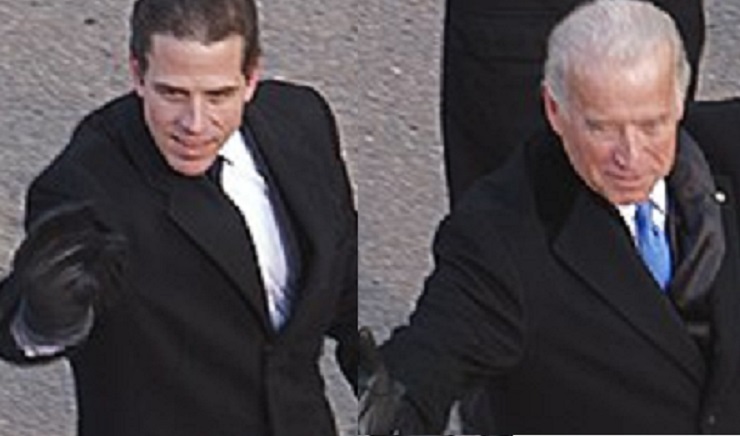 Surge Summary: As a matter of course, elected politicians in America profit handsomely from their “service”, especially after they leave off and can sell their influence. Most recent presidents confirm this pattern. It ought not to be so.

A new film has been released dealing with Hunter Biden’s misadventures in parts of the world where he and his father-president almost broke their backs carrying away baskets-full of cash. Newsweek reported that the film made “accusations of criminal activity against Hunter and Joe Biden, sex, drug misuse, scandal, exploitation and murder.”

In 2019, Biden was worth 1.5 million dollars, and today is worth 9 million. After he left the office of Vice President in January 2017, he earned “more than $15 million in a little more than two years! Much of it was from speeches that paid him $200,000 per speech. Come now, simple ones, who would even suggest that Biden could say anything worth $20? Now that he is President, his speeches will be worth even more. Well, they won’t be worth more money, but he will be paid more. Big difference.

Biden’s son Hunter has done very well in business because of his association with a China bank while his dad was vice president. Plus, the Daily Mail reported that Hunter “was paid $83,333 a month by Ukrainian gas company to be a ‘ceremonial figure,’” and Hunter’s firm was paid a total of $3.4 million! Also, the daughters of Clinton and Bush greatly benefited from their family association.

The New York Post reported that five members of Joe’s family also got rich because of connections with Joe. Astonishingly, Hunter was paid $3.5 million via wire transfer from Elena Baturina, the richest woman in Russia and the widow of Yury Luzhkov, the former mayor of Moscow. No one knows what Hunter did to deserve the money. I wonder if the IRS has asked him about the money.

One of the most unsavory politicians today is Speaker of the House Nancy Pelosi. Her wealth has increased from $41 million to nearly $115 million since 2004! Wow, she must really know the stock market or has a fantastic financial advisor. Her five most-traded stocks in the last two years were Apple, Microsoft, Facebook, Amazon, and Google—all top stocks. However, those stocks were all affected by pending legislation under her control.

Surely, she would not use her position to enhance her personal wealth since that’s devious, dishonest, and downright dumb. It’s called a conflict of interest. Do you think Nancy would support a bill prohibiting any elected official from dealing in the stock market while in office?

Thus, an honest politician appears on the scene as often as a chaste prostitute does. Proof of that statement is seen in former U.S. Presidents getting rich after they leave office. Sometimes it is blatant fraud, and other times, it is less obvious, like a politician who uses his influence and contacts to promote his books, business, or boondoggle. And ends up getting filthy rich when out of office.

Most politicians seem to have resolved to do as little work as possible while in office but carry away as much cash as they can. America has the best politicians that money can buy, reminiscent of H. L. Mencken’s quip, “Every election is a sort of advance auction sale of stolen goods.”

President Thomas Jefferson said, “I have the consolation, too, of having added nothing to my private fortune during my public service, and of retiring with hands as clean as they are empty.”

Obviously, Jefferson was in the minority.

The media revealed that former President Obama (I love to write that!) purchased a home in Martha’s Vineyard worth $15 million, proving once again that public service pays big. Their net worth is now $70 million.

Many politicians disprove the adage, “Crime does not pay,” since going into public service to do good, they end up doing very well.

As a Christian Conservative, I firmly believe in free enterprise, personal initiative, and capital accumulation—as long as everything is honest and high principles are practiced. It is one thing to write an informative book that is in demand and another to accept a directorship on a board of a company of which the former president or relative has no knowledge. He is selling his name and accrued prestige without providing any other value to the business. However, the norm seems to be for politicians to “do public service” for a few years and then trade on that service to make big bucks by taking seats on various Boards of Directors, becoming lobbyists, signing book contracts, etc. Especially etc.

Ben Franklin, while in Europe in 1777, wrote to a friend about public service in America declaring, “In America, salaries, where indispensable, are extremely low, but much of public business is done gratis. The honor of serving the public ably and faithfully is deemed sufficient. Public spirit really exists there, and has great effects. In England it is universally deemed a nonentity, and whoever pretends to it is laughed at as a fool, or suspected as a knave.”

At the Constitutional Convention, the men came at a sacrifice; Madison was there using borrowed funds. Such sacrificial acts are unknown today.

Gerald Ford was a very lackluster U.S. President, yet he showed an impressive ability to make over a million dollars within a year of leaving the White House. His worth at death was $7 million.

Even Richard Nixon managed to turn a fiasco into financial success. Without a wealthy family or business to support him, he left $15 million to his wife. While he refused to follow the lucrative speech-making circuit, he wrote seven successful books and invested in California real estate.

Jimmy Carter “was broke” when he left the White House. Still, with a few book deals, his million-dollar Nobel Peace Prize, and his professorship at Emory University, he parlayed his holdings to $7 million.

Ronald Reagan, a B movie star, was financially comfortable when elected President but increased his wealth when leaving office. He received $2 million for two weeks of speeches in Japan, causing much criticism from the media. Even some principled conservatives were discouraged, distressed, and disgusted by that caper. When he died, he and Nancy were worth $38 million.

Bill Clinton admitted, “I’ve never had any money until I got out of the White House, but I’ve done reasonably well since then.” Well, that’s an understatement. After driving away from the White House, he began making speeches for up to $500,000 a pop. Does anyone, including Democrat fanatics, think any Clinton speech is worth that? How about $50? He and Hillary have made more than $230 million since leaving the White House.

Chelsea Clinton, daughter of Bill and Hillary, is worth about $15 million. She raked in $9 million while serving on a corporate board from 2011.  One of Bush’s daughters is worth $4 million.

Come on now, friend. No one believes those lightweights could have done that if they were Smith and Jones.

Forbes revealed that Obama came to Washington in 2005, making $85,000 per year as a college professor, and has made $20 million since arriving in Washington. He signed a $65 million book deal and is paid $400,000 per speech. Public service pays off in a big way, and his net worth is now $70 million.

George W. Bush put his holdings in a trust in 2000 and had no idea of their worth, not having any ability to influence the trust officials who made all investment decisions. Bush earned $7 million for the first 1.5 million copies of Decision Points.

Forbes reported that Trump was worth 4.5 billion before his election, and as of September of 2021, his worth was down to $3.5 billion. So, Trump is the only President whose worth has decreased. Yet, his enemies accuse him of using his office to advance himself financially—even though he gave his presidential salary to charities!

Harry Truman wrote, “I have a very strong feeling about any man who has the honor of being an occupant of the White House in the greatest job in the history of the world, who would exploit that situation in any way, shape or form.” I agree with Harry.

Truman rejected many lucrative six-figure endorsement deals, consulting fees, and other offers that inundated him in 1953 until he moved back to Missouri after leaving office. He was paid $100,000 per year as President and received no retirement! He lived off his $112.56 monthly pension from his service in the Army Reserve and whatever he saved from his salary while in office.

It seems most of our members of Congress and presidents have sold their names—and their honor. But then, they wore a symbolic sign around their neck at their election party: “I’m for sale to the highest bidder—make me an offer.” They professed they went into “public service” to do good, but they ended up doing well—very well.

(Dr. Don Boys is a former Indiana House of Representatives member who ran a large Christian school in Indianapolis and wrote columns for USA Today for 8 years. Boys authored 20 books, the most recent, Reflections of a Lifetime Fundamentalist: No Reserves, No Retreats, No Regrets! The eBook is available at Amazon.com for $4.99. Other titles at www.cstnews.com. Follow him on Facebook at Don  Boys, Ph.D., and visit his blog. Send a request to DBoysphd@aol.com for a free subscription to his articles and click here to support  his work with a donation.)

“You have not lived today until you have done something for someone who can never repay you.” – John Bunyan. Baptist preacher

The post Rotten Pattern: Politicians Go into Politics to Do Good … End Up ‘Doing VERY WELL’ … appeared first on DailySurge.