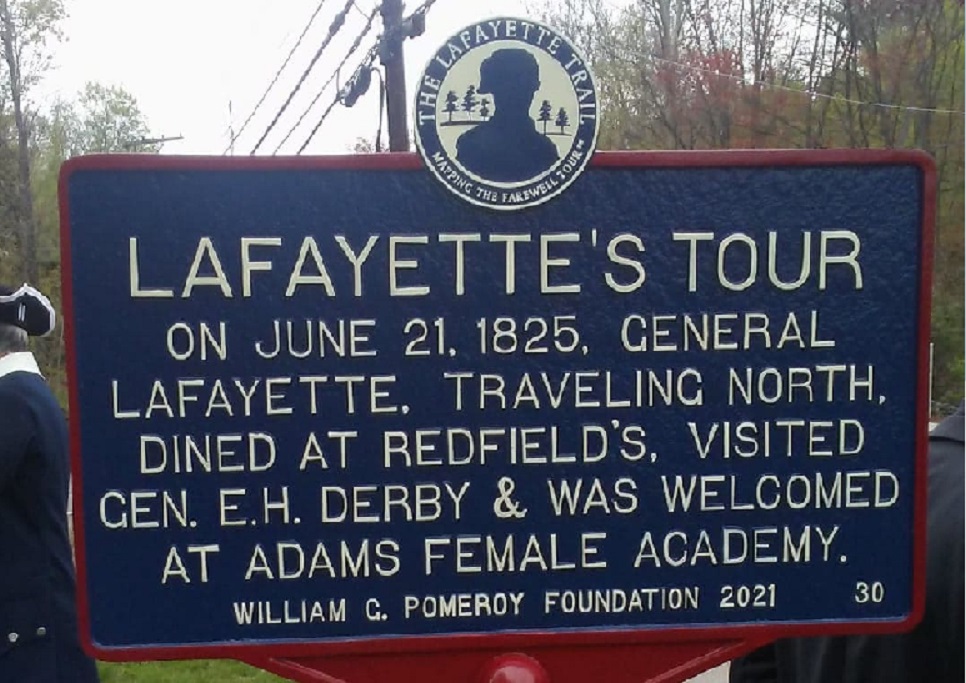 Surge Summary: A recent historical commemoration reminds those willing to pay attention that, yes, an appreciation for history matters. Knowledge of the past plays a signal part of proper negotiation of the present and successful planning for the future.

It was one of those early May days which require me to remind myself it really is springtime — technically, at least. Overcast, breezy, chilly, a spiteful rain was threatening; decidedly not auspicious conditions for standing outside any length of time.

So … why were a platoon-sized huddle of redoubtable bystanders doing exactly that this week? A handful of them, on top of that, facing the drearisome elements while sporting antique costumes and hefting functioning-but-outdated firearms? 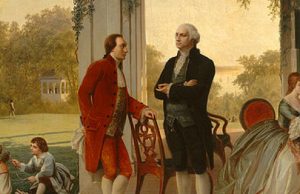 The event was the unveiling of a plaque memorializing the visit of the Marquis de La Fayette to Derry, NH one-hundred-ninety-six years ago. For those in the a-historical dark, Marie-Joseph Paul Yves Roch Gilbert du Motier, Marquis de La Fayette — more popularly known here in the United States simply as “Lafayette” — was a French aristocrat and military officer who sometimes fought alongside, sometimes commanded American troops during the nation’s Revolutionary War. His 1825 stopover in this modest New England town was a leg of his far-spanning Farewell Tour of the U.S.

The commemoration’s Master of Ceremonies was twenty-seven-year-old Julien Icher, Founder and President of the Lafayette Trail, Inc. Icher has something in common with the function’s long-departed honoree: He’s also a Frenchman who boasts a marked soft spot for America.

That said: This bunch endured half-an-hour out in the unseasonable rawness? The attending quartet of colonial-era reenactors remained statue-still despite the inhospitable weather?  All for a guy now deceased close on two centuries?  Whatever motivated them to do that?

Well, apparently, this hardy band decided a brief pause to formally memorialize Lafayette was worth the physically discommoding effort. Yes, for these men and women a purposeful reflection on this influential figure — on his consequential life, his weighty accomplishments — was sufficiently rewarding to justify the exercise; even against a brisk, mid-Spring backdrop. 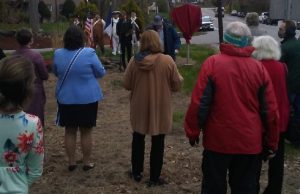 The refrain “I hate history” or “History is boring” is, of course, regularly heard in the halls of many an American school. And it’s a complaint not a few adults continue nursing long after they depart those corridors. But Derry, NH’s Lafayette gathering — along with an abundance of others like it across the fruited plain acknowledging not only the French General but multitudes of other celebrated personages — confirms an allergy to all-things-historical hasn’t overtaken everyone. Too many U.S. citizens, nonetheless, possess little to no interest in that which has preceded them — which is a shame and a bit scary. It carries regrettable consequences not only for these individuals, but for the country they call home.

Across the span of America’s timeline, not a few eminences have taken issue with historiphobia.

“We are not makers of history,” Martin Luther King, Jr. declared. “We are made by history.”

Founding Father Patrick Henry conceded, “I know of no way of judging the future but by the past.” Journalist Norman Cousins styled history “a vast early warning system.”

“Without history we would be condemned to remain children,” British novelist Peter Tremayne has written, “not knowing who we are nor where we come from. Without knowing the past we cannot hope to understand the present, and not understanding the present, we cannot shape a better future.”

Eighteenth-century Irish statesman/philosopher Edmund Burke: “People will not look forward to posterity who never look backwards to their ancestors.”

President Calvin Coolidge: “A wholesome regard for the memory of great men of long ago is the best assurance to a people of a continuation of great men to come, who shall still be able to instruct, to lead, and to inspire.”

None of the above, mind you, unfolds without a studied regard for history; without an appreciation for those episodes and individuals who’ve gone before us. Cultivating such a beneficial attitude is more than wise; it’s necessary to experience life at its richest, in its fullness. Lessons can be learned, perspective gained, mistakes avoided, hopefulness energized, gratitude fostered. Positives all. 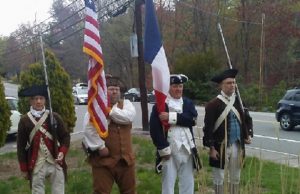 Best-selling historian/author David McCullough has characterized “try[ing] to plan for the future without a sense of the past is like trying to plant cut flowers” — a strikingly apt observation when addressing intensifyingly rootless homo modernus. Too frequently, twenty-first-century types reflexively indulge in the shunning of and scoffing at what their forebears established.

Outspoken scholar Christina Hoff Sommers has acerbically cautioned against “the folly of all the schemes for starting from zero”; i.e., the shortsighted daftness of dissing most former things, of thinking pretty much all that matters are those developments that emerge during one’s own lifetime. The intellectual, philosophical and spiritual capital supplied by the contemplations, experiences and examples of yesteryear? Meh. Yawn. Sneer.

It’s a really dumb posture, a lamentable mindset to which self-centered human beings can be woefully inclined even during the best periods– and one particularly in fashion among the current crop of mortals. Increasingly, members of the Millennial Generation and Gens Z and Alpha are prone to assume the most coveted features of Western Civilization reached their current state by happy accident, undemandingly and coincidentally flowering into existence around the time of their birth. 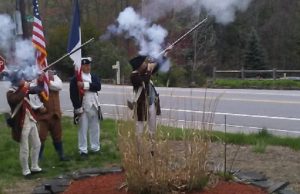 A salubrious dose of history — thankfully — will put paid to any such notions.

It’s one reason, less than a decade before Lafayette conducted his famed circuit around this still fledgling Republic, Thomas Jefferson reaffirmed : “A morsel of genuine history is a thing so rare as to always be valuable.”

It’s appropriate, then, to go out of the way to recognize a luminary who played a pivotal role throughout the nation’s War for Independence and in the budding years following? By all means! To do so even when Mother Nature is disobliging? You betcha! The dividends earned by keeping the flame of historical memory unfailingly burning more than compensate for whatever inconveniences or discomforts that might entail — including when the calendar says May but outside it feels more like March.

The post Of Course! Hats Off to Gen. Lafayette — Because He Mattered … and So Does the Rest of History appeared first on DailySurge.