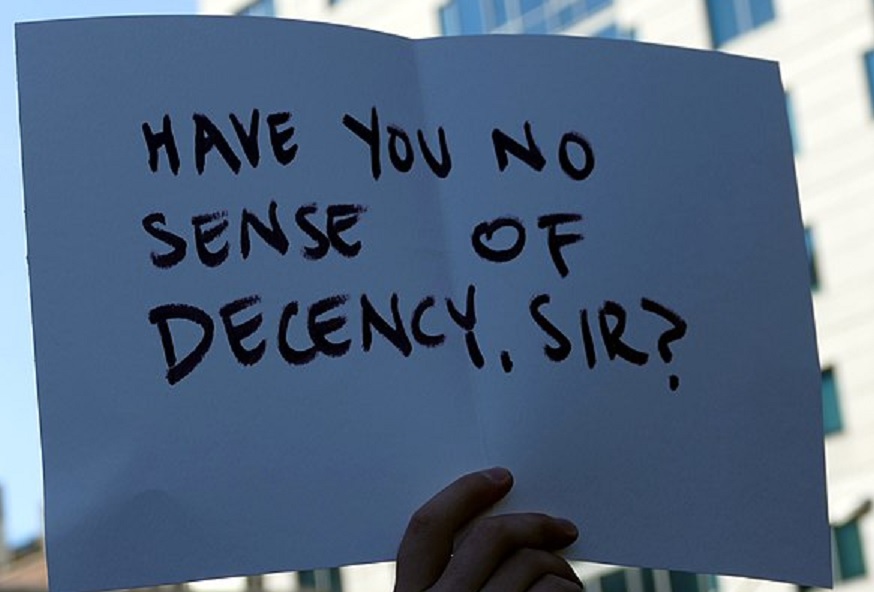 Surge Summary: Across the board, Leftist radicals prove by their irrationality, inconsistency and hypocrisy that they have no sense of decency.

When Senator Joseph McCarthy tried to warn America about Communist spies in our government and military, the Communists and fellow travelers came out of the woodwork. During the Army-McCarthy Hearings in 1954, Chief Counsel for the U.S. Army Joseph Welch questioned Senator McCarthy’s sense of decency because the senator suggested a young attorney was a Communist. Gullible Americans swallowed that line along with the sinker and hook. It sounded so principled, but it was Welch playing to the gallery with his acting ability.

Maybe he was a better actor than attorney.

Liberals, leftists, and loonies liked the question and considered it the coup de grâce in their battle with the spy chaser. Therefore, I will use it to the advantage of truth as I ask those sitting to the far left if they have any sense of decency or any sense of shame.

Don’t leftists have any sense of decency when they use the race card to silence any discussion or debate or disagreement with informed Conservatives? By suggesting it is a closed issue too sacred, too serious, too settled to permit questions, they don’t have to answer any questions! Have they no sense of shame when they declare that every white person is a racist and no Black can be a racist. For sure, they have no sense of decency.

Or, they have no sense.

By making everything racist, it draws attention away from actual racist acts committed by Whites, Blacks, and other haters.

Other indications leftists have no sense of shame (and no sense) is when the BLM mob disrupts, destabilizes, destroys, and tries to disband the police—yet call for the police when they need help. Not only do they have no shame, but they are also hypocrites.

Those who usually are found standing in left field also have no shame about gun control. What they want is people control. Tyrannical government fears guns in the hands of freedom-loving people.

For a good reason.

The gun grabbers usually blame the cop when he shoots a resisting or fleeing felon but blames the gun when a criminal shoots someone? Simple logic and common sense (missing in leftists) require consistency; however, they are not interested in reality. Leftists have to force every incident into their twisted agenda: racism is the cause of sunspots, tornadoes, arthritis, dandruff, a bad economy, and migraine headaches. They promote black racism and blame anything and everything on Whitey.

Don’t leftists have a sense of decency when they declare and demand a child’s right to decide whether they are male or female? That is determined at birth, so no choice needs to be made since it is either male or female. Genesis 1:26 speaks to this issue: “And God created man in his own image, in the image of God created he him; male and female created he them.” Well, that settles that.

Most sane people realize it is not a decision to make. If in doubt, one only has to look down. A physician or committee or decree is not necessary. No decision is required since it is an observation.

This same crowd says a child (boy or girl) can choose to be either one or something else, and his parents have no right to say anything about medical treatment, including physical mutilation and life-changing hormones. We are told that it is illegal if a parent refuses to call Harold by his new name, Harriot.

A father in Canada was convicted and sent to jail for “family violence” after refusing to call his daughter by her new male name.

That is the same mentality that says there is no such thing as gender, yet demanded a female vice-president! I understand they finally got one, but I keep forgetting her name.

Don’t leftists have any sense of decency when they try to champion men who pretend to be women and claim a right to women’s restrooms, showers, and the right to participate in women’s sports? Don’t they have any sense of decency as they insist even young children have a right to decide their own gender and the right to get hormone treatments and mutilating surgery? Thanks to Blather-in-Chief Biden’s executive order, transgender surgery is now free for military, prisoners, and illegal immigrants—and taxpayers pay the enormous bills.

Doesn’t that make you proud to be an American?

Don’t leftists have any sense of decency when they demand taxpayer funded abortion on demand and even demand the right to kill a child after their birth if the mother decides it is too sickly—or too much trouble. You know—feedings during the night, changing diapers, babysitters, and all those inconveniences. Moreover, they demand the right to kill a newborn baby that manages to survive the murder attempt. Baby killers tell us no efforts should be made to permit the baby to live.

Well, does that make you proud to be an American?

Don’t leftists have any sense of decency when they pretend that a family is two men or two men and a woman or even one man and three women? God clearly told Adam that a man would leave his father and mother and cling to his wife. Not his neighbor’s wife. Not to his favorite goat. But to his wife and they would be a family until parted by death. No, no shame, no decency.

Don’t leftists have any sense of decency when they pretend the U.S. Constitution gives them permission to take money from some of us to give to all of us? They don’t even consider they are doing something most Americans will like, but it is absolutely illegal. If leftists want a Socialist Government, why don’t they change the Constitution to make it legal? Evidently, they want to make America Socialist, and when we get accustomed to the freebies, they will make the giveaways and bailouts constitutional.

Don’t race-baiters have any sense of decency when they, like what’s-her-name Harris, accuse Americans of racism when we twice elected a half-black President and elected Harris the first partially Asian American and partially Black American Vice President? Someone is not thinking straight here.

Don’t the mainstream media have any sense of decency when they refused to deal with John Kerry’s refusal to wear a mask on a commercial flight but a few months earlier gave Senator Ted Cruz fits for doing the same thing? Yet another example of bias from those who claim to be neutral and balanced in their reporting.

The media continued to show bias when the Blunder-in-chief fell three times while boarding Air Force One. MSNBC, CBS News, Washington Post, Los Angeles Times, and New York Times made no mention of the stumbling incident. But they made a big deal when Trump walked slowly and carefully down a ramp at West Point. Biden also ridiculed Trump at the time, saying, “Watch how I run up ramps, and he stumbles down ramps.” The mainstream media have no shame.

Doesn’t the Biden White House have any sense of decency when they fired five staffers for having used marijuana when Vice President Harris (I’ve almost memorized her name) admitted doing the same thing?

No, the leftists have no shame; they have no sense of decency; they cannot blush as was true millennia ago when Jeremiah wrote in Jeremiah 6:15, “Were they ashamed when they had committed abomination?  nay, they were not at all ashamed, neither could they blush.”

Principled people can blush because they have a sense of decency—that progressive Liberals don’t possess.

(Dr. Don Boys is a former member of the Indiana House of Representatives who ran a large Christian school in Indianapolis and wrote columns for USA Today for 8 years. Boys authored 18 books, the most recent being Muslim Invasion: The Fuse is Burning!  The eBook is available here with the printed edition (and other titles) at www.cstnews.com. Follow him on Facebook at Don  Boys, Ph.D.; and visit his blog.  Send a request to DBoysphd@aol.com for a free subscription to his articles, and click here to support  his work with a donation.)

The post Liberals, Leftists, and Loonies Demonstrate: They Have No Sense of Decency appeared first on DailySurge.