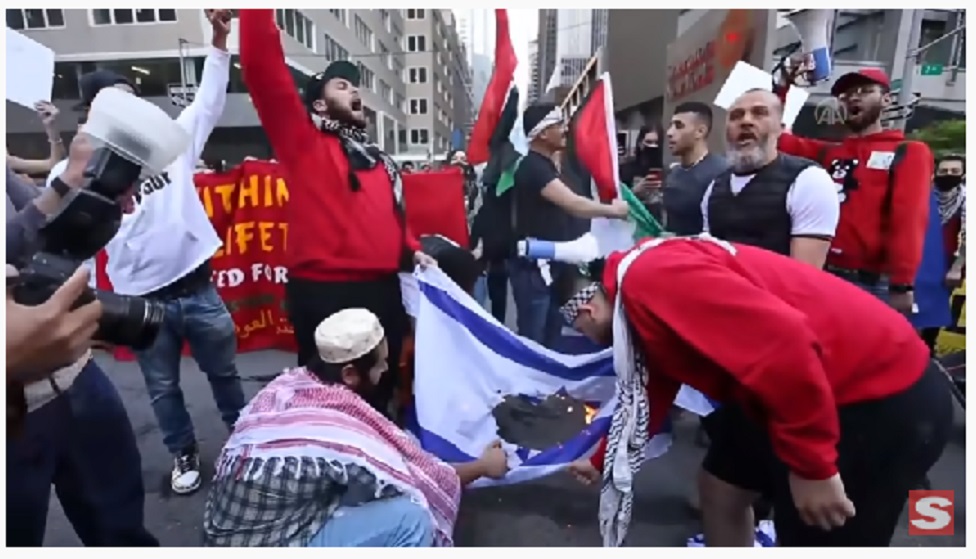 Surge Summary: Among the Ranks of U.S. Leftists and Dems – and among peoples abroad — Glaring Jew-Hatred Seems to Be increasing. Too-little, too-late, President Joe Biden sends out a tweet about it.

We now know the full extent of the anti-Semitic savagery that has swept the United States.  From coast to coast, synagogues have been vandalized.  American Jews have been chased down by cars, attacked by mobs and verbally harassed in the worst outbreak of anti-Semitism this country has seen in decades.

In virtually every case, the attacks took place in large cities.  They were committed by Middle Eastern men waving Palestinian flags.  Left-wing extremists frequently joined in the attacks.

These are Democrat-controlled cities from top to bottom.  Any president would have an obligation to condemn anti-Semitism, but Democrat Joe Biden, who is always eager to wag his finger at alleged bigotry and police misconduct, has a particular obligation to do so.

This morning, Biden finally did denounce anti-Semitism – in a tweet.  That’s too little too late.  Where’s the forceful, passionate statement from the White House podium that should air on the evening news to seen by millions of Americans?

The sad reality is that there is a growing hate-Israel movement on the left.

Biden and leading Democrats must find their voice. This hatred will consume the party of FDR, Harry Truman and JFK unless brave Democrats condemn it and expel the haters from their ranks.

I have a friend who has lived in Paris for a while, and often commented on what life must have been like before and during World War II.  He recently noticed people marching through his neighborhood chanting, “Death to the Jews!”  He saw an Israeli flag with the Star of David replaced with a swastika.

Instead of wondering whether he would have hidden Jews in his attic in the 1930s or 1940s, he’s wondering what he will do now.  All of us must ask ourselves that same question now.

The post Biden Sends a Tweet — but Among Leftists, Dems Jew-Hatred Seems to Be On Rise appeared first on DailySurge.