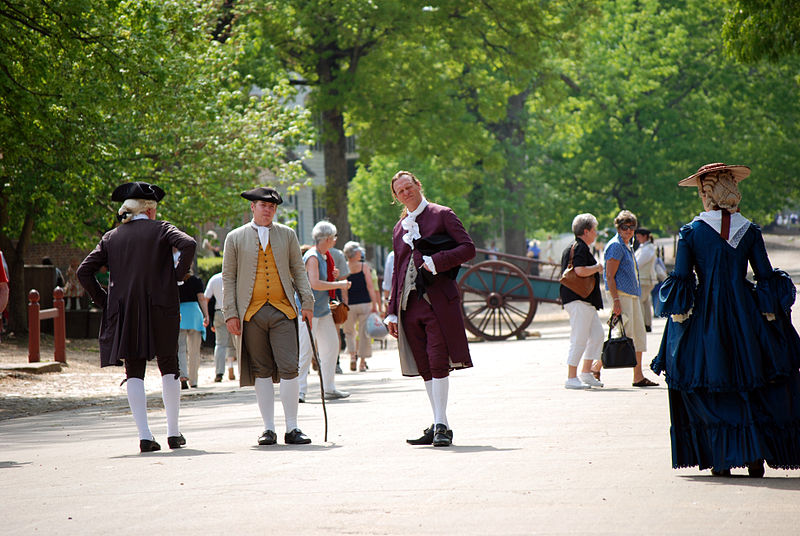 Surge Summary: Virginia’s popular tourist attraction Colonial Williamsburg is starting to introduce “woke” elements into its presentations – which could spell trouble for the site’s heretofore solid commitment to historic accuracy. Its financial health could suffer as a result.

Colonial Williamsburg is a world apart.

Visitors can leave behind 21st Century culture and politics and immerse themselves in a 301-acre “living history” area that recreates pre-Revolutionary America.

Horses pulling wagons clip-clop down Duke of Gloucester Street, with drivers clad in colonial garb and tri-cornered hats. Shopkeepers, blacksmiths, and members of the House of Burgesses converse in words befitting an English colony in the late 18th Century.

The leafy, ivy-covered campus of William & Mary, founded in 1693 and second only to Harvard as the oldest college in America, adjoins the Historic Area, with Market Square in between.

The whole thing is utterly charming, especially for people battered by our nihilistic culture. People don’t go to Colonial Williamsburg for the same “woke” nothingburger served up nonstop by the media and ruling elites.

The “woke” movement hates America. It hates America’s founding, its leadership role in the world, the nuclear family, and, above all, America’s success as a self-governing nation undergirded by Judeo-Christian values.

The woke movement’s flagship vehicle is the Marxist-led Black Lives Matter. Amazingly, President Biden’s State Department has authorized U.S. embassies to display the BLM flag on poles outside our embassies. What other nation instructs its diplomats to fly the banner of a movement that despises its own country as evil and racist?

Anyway, visitors go to Williamsburg to escape such nonsense and to be reminded that America’s origins, while not perfect, were sculpted by intellectual giants such as Thomas Jefferson, Patrick Henry and George Washington.

It’s why I’ve been a donor for years and taken my family there. It’s better to light a candle and celebrate America than to curse the darkness. So, I was perplexed to see the Washington Post this past week run a feature entitled, “The newly woke world of Williamsburg: Colonial living-history museum is churning out progressive, insightful theater.”

Uh oh. I could just see a couple of guys in white stockings and buttoned greatcoats doing an 18th Century version of “Kinky Boots” or “The Laramie Project.” It’s actually not that bad, but it’s a toe in the waters of “woke” culture, which never ends well because it’s designed to kill its host.

Sure enough, on the probable site of the very first theater in America, the Play House Stage is showing the “Ladies of Llangollen” by Claire Wittman. Part of the mission of the “gender and sexual diversity committee,” the play is about a lesbian romance.

This is just the kind of entertainment that James and Dolly Madison would have rushed to see, a vat of colonial popcorn in hand, don’t you think?

One woman says, “Your happiness is my only aim,” to which the other replies, “I don’t want a husband. I want you,” the Post reports, giddy at this progressive “backstory.”

The reporter sniffed that “at least one family in attendance seemed to take umbrage” and walked out when the theme became obvious. But the “50 or so” remaining spectators gave the actors “a hearty ovation.” Of course they did.

The Post article also describes the mission of a re-enactor portraying Edith Cumbo, “a free woman of color” who “tries daily to convey to tourists the humiliations and contradictions Cumbo lived with.” It’s part of the shift from the “Anglican-European point of view,” an official explains.

Becoming more historically accurate is laudable, but it’s not without risk at a time when Colonial Williamsburg has taken some hard financial hits and dipped repeatedly into its endowment. Attendance, which peaked in 1985 at 1.1 million visitors, now averages about half of that.

Chalk it up to the nation’s schools no longer teaching American history, along with a generation raised on computer screens, cell phones, gory movies and thrill rides.

In 2020, the Wuhan COVID-19 virus reared its ugly head. More than 700 of 1,800 Historic Area employees were laid off in March and hotels and restaurants were closed for at least two months, along with many of the attractions.

For 81 years, Williamsburg was the capital of the Virginia colony. In 1780, Gov. Thomas Jefferson moved the capitol to Richmond during the Revolutionary War, leaving Williamsburg to fall into disrepair.

In the late 1920s, the Rev. Dr. W.A.R. Goodwin teamed up with John D. Rockefeller Jr., heir to the Standard Oil fortune, to begin the Historic Area’s restoration, including the Bruton Parish Church. Also restored were the College of William & Mary’s Wren Building, Brafferton House and President’s House. It was their enduring gift to America.

As summer dawns, Colonial Williamsburg, like the rest of previously locked-down Virginia, is getting back on its feet and seeing an uptick in visitors.

Because the city of Williamsburg owns the main Historic Area thoroughfares, you don’t need to purchase a pass to stroll. But it’s a good idea if you want to experience many of the buildings, museums and presentations.

Change should come slowly to gems like Colonial Williamsburg, where preserving the past is its raison d’etre.  In 1973, just ahead of the Bicentennial, hostesses were dressed in red, white, and blue polyester knit pantsuits. Visitors didn’t react well, so the colonial costumes came back.

Now, however, in the Historic Area, “the city’s slaveholding past is to figure in every tour and talk,” according to a new directive.

It’s good that they’re acknowledging the reality of slavery, because it’s history. But they should avoid becoming a colony of Black Lives Matter if they want families to come back.

Otherwise, it may become a case of “get woke, go broke.”

Robert Knight is a contributor to The Washington Times. His website is roberthknight.com