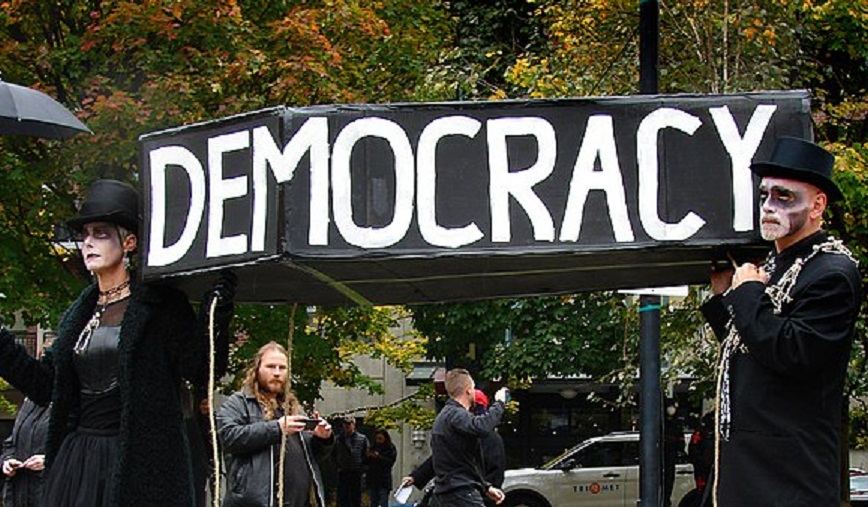 Surge Summary: President Biden warns about threats to democracy in America and worldwide – and then, along with his progressive allies, acts in ways and encourages policies that undercut democracy’s principles and values.

In his Memorial Day remarks at Arlington Cemetery, President Biden warned the crowd, “Democracy itself is in peril. Here at home and around the world.”

I agree that free nations are facing growing threats around the world, but you would never know it by looking at Biden’s foreign policy. Our allies Japan, Australia, Taiwan, as well as many other nations are being threatened and bullied by communist China. Biden signals weakness in response.

The most vibrant free nation in the Middle East is Israel, but Biden is begging for a deal with Iran’s mullahs who regularly promise to wipe Israel off the face of the earth.

Ukraine’s young democracy is under severe pressure from Russian troops massed on its borders. But Biden gives the green light to a Russian gas pipeline that will make our European allies more dependent on Putin’s tender mercies.

Do any of these polices make sense if Biden believes democracy and freedom are facing grave threats?

But what really got me to thinking was the president telling us that democracy itself is in peril “here at home.” Many of us, perhaps all of us would agree there is peril to our Constitutional Republic, but not for the reasons Biden probably had in mind.

He sees danger in places like Texas where they are trying to ensure the integrity of elections so that only legal votes are counted. On Saturday, Biden attacked the state for “targeting” Black and Brown voters. But confidence in ending fraud in our election is key to safeguarding our Republic.

Why Our Liberty Is In Peril

I offer these helpful examples to President Biden on why so many Americans do believe our freedom is in peril.

So, yes, President Biden, clearly American liberty and our national security are in grave peril and you are clueless or complicit in what threatens us.

The post Biden Says He’s Worried About Threats to ‘Democracy’ – But He, Fellow Leftists Don’t Much Act Like It appeared first on DailySurge.