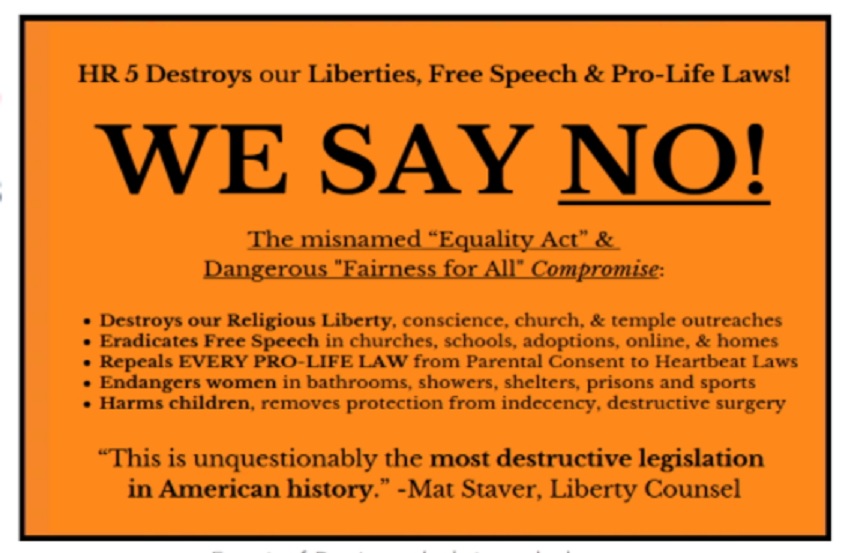 Surge Summary: The anti-Christian, anti-religious liberty “Equality Act” must be stopped. Concerned parties must contact our elected officials and say as much. One organization has provided the means for them to do so.

By now I trust you are aware of the permissive, progressive radicals in power preparing to ram through what Liberty Counsel legal ministry calls “The most dangerous legislation ever proposed in America’s history.” It looms on the horizon in the Senate to totally topple traditional morality in America.

Can I ask you to read that again and then look me in the eye and listen to probably the strongest appeal I’ve made in 50 years of ministry? Dr. James Dobson, Franklin Graham, Tony Perkins, Dr. Michael Brown, Lou Engle and scores of influential Black, Hispanic, evangelical, charismatic and denominational leaders are in total solidarity, imploring us to eradicate the so-called “Equality Act”—the completely evil legislation already passed by the House and backed by Joe Biden.

This is not hyperbole or a hysterical rant but a brutal reality that necessitates immediate action. One of America’s most respected faith leaders, Al Mohler, said, “If this legislation passes and becomes the law of the land, say goodbye to religious freedom. It would totally transform the United States as we know it because it represents a direct subversion of religious liberty.”

Wait, There’s Good News!
At this year’s Roundtable leadership summit, pioneer Janet Porter (champion of the “Heartbeat Bill” (now passed in 14 states with 23 others moving forward!) and I met with senior leaders who are aware of what was developing. We knew we must pray fervently and act urgently in raising a red flag concerning what was coming at America like a runaway freight train.

The result was divine intervention. God gave us an idea for a creative initiative wherein fair-minded, traditional Americans of all stripes could take action to communicate simply, clearly and massively that this proposed legislation must not be passed. The simple strategy: mobilize the masses to click and send an avalanche of postcards to our civil authorities saying in no uncertain terms, “WE SAY NO!”

The response has been miraculous! In a matter of weeks. over 1 million postcards have flooded the offices of all our Senators, Supreme Court Justices and the White House. And as the famous song put it, “We’ve only just begun.”

— Calling your senator has merit, but phones can be turned off or messages ignored.

— Sending faxes to your senator also has merit, but fax machines can also be turned off or said to be “overloaded.”

— But all postcards sent through the United States Post Office must be individually delivered, and tampering in any way is a federal crime.

Plug In the Powerful Plan

Postcards were designed conveying our clear message regarding defeating this dangerous piece of legislation. The color of the postcards is orange, catching attention and conveying the sense of alert.

We strongly encourage you to become a part of the “orange wave” tsunami! Following the directive of Jesus to be salt in holding back decay, let’s let our elected officials know exactly where we stand. We are uniting with scores of silent-no-more traditional, freedom-loving Americans upholding decency in an easy and effective way to fight HR5, the deceptive “Inequality Act.”

— Engage knowing that “faith without works is dead” (James 2:25). Immediately, click on stophr5.com to be informed and probably shocked at the ways this law would devastate your family and our future in America. Do it now so we collectively pull the plug on this pernicious piece of legislation.

— One click will send a postcard to every one of our 100 US Senators, the White House and all nine Supreme Court justices personalized with your name, city and state and mailed through the United States Postal Service. All this for less than the price of postage if you were to send them all yourself! Congressmen and women can ignore emails and phone messages, but they must deal with bushels of deposited mail accumulating in their offices!

Invite family and friends to join in this simple and effective campaign.

All the details are on the site. No one is making any money or collecting email addresses. This is your individual investment in protecting and preserving our faith, freedom, families and future in America. Finish this article and then go immediately, as the Monopoly card says, “Do not pass go. Do not collect $200. Go …” Yes, go to stophr5.com and for all of us who have already sent our postcards, how about doing it again?

Grasp the Gravity and Opportunity

In 1964, Congress passed the landmark Civil Rights Act to end discrimination and preferential treatment of American citizens based on race, color, sex or national origin. Now, having radicalized the Democrat Party, secular progressives are promoting a left-wing agenda that is anti-God, anti-sanctity of life and marriage, anti-traditional family and diametrically opposed to our Judeo-Christian foundations establish by our Founding Fathers.

They took the 1964 Act and cleverly expanded it to include “sexual orientation and gender identification” so all LGBTQ activists and activities take on special protected status under penalty of fines, imprisonment and removal of tax exempt status for churches, ministries and all nonprofit religious groups who do not conform to their unrighteous dictates.

I beseech everyone reading this commentary to click on this link to read the 15 specific reasons we must rise up and resist this act. If you are a pastor or a ministry leader, I implore you to post the reasons and or use them in a sermon or email communication with those you can influence to become part of the postcard revolution.

Here’s the Deal: What’s happening on our watch represents a Mordecai moment! “And who knows whether you have not come to the kingdom for such a time as this?” (Esth. 4:14b, ESV). Act now, and together we will see a mighty victory for the glory of God. Go to stophr5.com now!