Cinotti’s Bakery returned for its normal business hours Tuesday after the well-known Jacksonville Beach bakery issued an apology after one of its owners posted anti-LGBTQ messages to her social media page.

Cinotti’s Bakery is just a few miles up the street from me here in Saint Augustine, in a town called Jacksonville here in the free state of Florida. The other day one of the owner’s of Cinotti’s, co-owner Doodle Cinotti, published a pro-heterosexual ‘straight pride’ post which I found rather amusing, and quite accurate. None of us would be here without heterosexual people getting married and having babies, and science will never change that process. Naturally, the LGBTQ+ Mafia were immediately outraged.

“This is the book of the generations of Adam. In the day that God created man, in the likeness of God made he him; Male and female created he them; and blessed them, and called their name Adam, in the day when they were created.” Genesis 5:1,2 (KJB)

“And Adam said, This is now bone of my bones, and flesh of my flesh: she shall be called Woman, because she was taken out of Man. Therefore shall a man leave his father and his mother, and shall cleave unto his wife: and they shall be one flesh. And they were both naked, the man and his wife, and were not ashamed.” Genesis 2:23-25 (KJB)

I give Cinotti’s lots of credit, it takes guts to stand for Bible truth in a day and age where truth is ‘fallen in the street’, it truly does. When I called them for a statement, Michelle Vining speaking on behalf of the family, told me that they apologized if anyone was hurt by their post because their Christian faith tells them to love people. On that point I wholeheartedly agree, Jesus died for the worst of sinners, filthy rotten sinners like me…and you. Michelle also told me that the apology did not mean that they were caving into the pressure, or backing away from their biblical Christian beliefs. Only that they never meant to hurt anyone, and again, I commend them for that. More than once in my Christian walk have I had to go back and apologize, not for what I said, but for how I said it. If the gospel offends people, let them be offended, but we should not be offensive personally to other people around us.

If you live local to Jacksonville, Florida, I urge you to stop into Cinotti’s Bakery and give me them your support, encourage them for taking a biblical stand, I am sure they would appreciate that. And by the way, when my daughter got married last month, Cinotti’s made the cupcakes, and they were fantastically delicious!

“But speaking the truth in love, may grow up into him in all things, which is the head, even Christ:” Ephesians 4:15 (KJB)

1st day of business for Cinotti’s Bakery after backlash, apology over anti-LGBTQ posts

FROM NEWS4JAX: The bakery is always closed on Sundays and Mondays, and the owner, Mike Cinotti, told News4Jax the employees, including his wife, Doodle, who shared the posts, were at the bakery on Monday to review and revamp the business’ social media policy.

The bakery opened for business on Tuesday morning at 6 a.m., and News4Jax saw a handful of customers heading in to the shop not long after the doors opened. Some customers said they would not return to Cinotti’s after the controversy, but many others said they would still support the business, which they called a beloved fixture in the community. 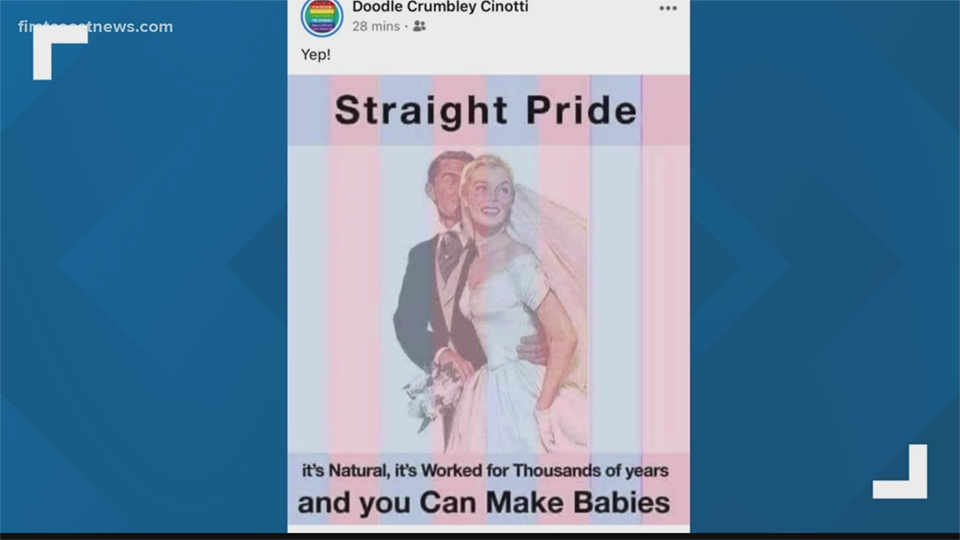 THIS IS THE POST THAT CAUSED ALL THE RUCKUS, WHAT DO YOU THINK OF IT? COMMENT BELOW!

The posts that sparked the backlash came from Doodle Cinotti, a vice president of Cinotti’s Bakery-Sandwich Shop. One meme described heterosexual relationships as “natural” and implied that any other types of relationships are unnatural.

Mike Cinotti, Doodle’s husband and the business owner, said the Facebook posts do not represent the store.

“What you’ve seen on social media is not a true picture of who we are,” Mike Cinotti said in an interview with News4Jax. “I would love to invite anybody to come, have a cup of coffee and sit down and find out who we really are.”

Stephen Gaskill, president of the Florida LGBTQ Democratic Caucus called the post “tone-deaf” at best and “incredibly homophobic” at worst and said it was particularly hurtful during Pride Month, which celebrates the LGBTQ community.

“Florida really is moving towards being a non-discriminatory state. We support equality. We are opposed to discrimination. And yet, we still have pockets where things like this happened,” Gaskill said. “Where this post can be posted, clearly heartfelt belief, or she wouldn’t have posted it.”

As the bakery moves on and moves forward, Mike Cinotti said he hopes people will take the apology to heart.

“First, foremost, we apologize for any for offending anybody. We never intended that. Our hearts are to serve this community,” he said. “We all make mistakes.”

Cinotti also apologized saying that anti-LGBTQ messages are not in line with their Christian beliefs. READ MORE