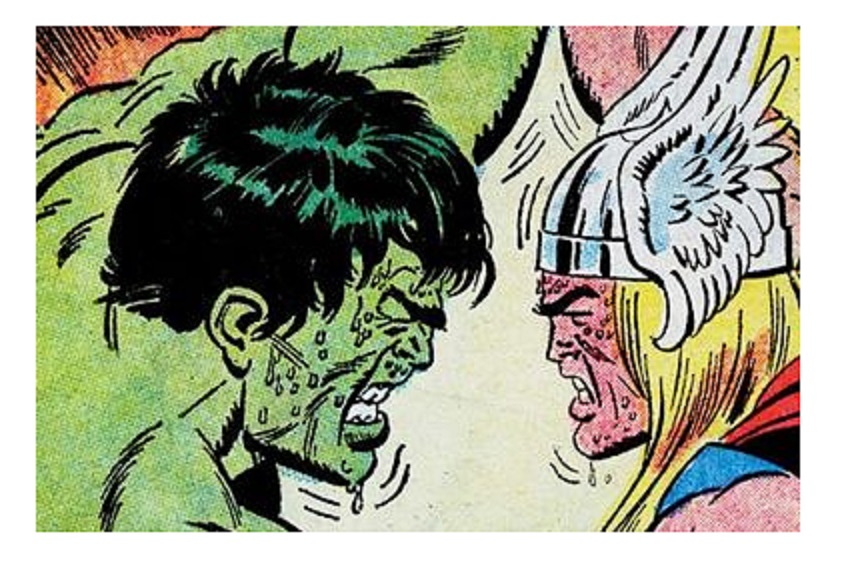 Surge Summary: The debate over so-called cultural issues goes on and on and on. So those standing up for America’s founding ideals and Judeo-Christian values need to engage in that mission with that same tireless determination.

Nowadays, on the culture-war front — hey, who are we kidding? On nearly every societal front — America seems to be trapped in a kind of stasis. It’s one step forward, one backward for traditionalists; a victory for righteousness and common sense here, followed regularly by loss for same there.

For me, the predicament prompts a rather strange reminiscence: A four-color scene from a Marvel Comics title, circa 1973: The Incredible Hulk in all his green grandeur and the Mighty Thor are locked, face-to-face, in a grueling stand-off. An hour of super-powered snarling, straining, sweating passes. Neither yields an inch, frozen immobile in what looks to be an interminable impasse. Never mind how the omega-level deadlock is finally resolved; just know that, indeed, it ends a draw.

Two fictional behemoths squaring off against each other, neither capturing the definitive, commanding position? Right now, contemplating 2021’s battling Right versus the saber-toothed Left, I can conjure worse metaphors. Because it’s clear that, to borrow a phrase from the editors of National Review, raising a barrier against this generation’s juggernaut of cultural-derangement “is becoming itself a test of endurance.” Which side will crack first? Which will be the one who buckles in the contest?

For all that, those of us committed to sexual/gender sensibleness — those of us authentically acknowledging the facts of “science” — did gain some ground this week.

Jody Brown over at OneNewsNow.com passes along the details:

A Christian teacher in Virginia who was suspended for refusing to lie to children about their sexuality has been reinstated, as ordered by a circuit judge.

Tanner Cross, an elementary school P.E. teacher in Loudoun County, was placed on administrative leave last month after daring to speak publicly of his faith and his opposition to a school policy.

“It’s not my intention to hurt anyone, but there are certain truths that we must face when ready,” he stated …”We condemn school policies like AD40 and AD35 because it will damage children [and] defile the holy image of God.”

The two policies would require teachers to use a child’s preferred pronouns instead of the one that corresponds to their biological sex, in some cases without parental notification or consent.

“I love all of my students, but I will never lie to them regardless of the consequences,” Cross continued. “I’m a teacher, but I serve God first – and I will not affirm that a biological boy can be a girl and vice versa, because it’s against my religion, it’s lying to a child”. …

[The Alliance Defending Freedom] contends that with this ruling, the clear message from the court to the school board is “you are not above the law.” And just like everyone else, says the legal group, teachers have First Amendment rights to express their views.

Be encouraged and rejoice, God-honoring culture warriors! But be forewarned as well:  It’s dead certain the other side is already plotting its response, up for lashing back in whatever ways it can. And it’s likely some of that lashing back will produce countervailing advancements for their twisted causes.

So, rather than throwing up our hands in exhausted despair, insightful conservatives ought to draw inspiration from the other side’s determination; from its resolve to never stop, never surrender; from its attitude that a skirmish lost never means permanent vanquishment or “time to toss in the towel”.  Lovers of God and country simply have no choice but to unbudgingly embrace that same dogged mindset — whether regarding gender sanity, parental issues, protection for the unborn, constitutional concerns, America’s Judeo-Christian heritage; whatever the cultural flashpoint.

When I caught reports several days ago of the Dallas, TX valedictorian who hijacked her high schools’ graduation ceremony to denounce the Lone Star State’s recent pro-life initiatives, I  experienced an immediate squirm of  quiet revulsion: here is a — pardon me — naïve teenager impudently lecturing her peers and, thanks to the internet, the planet on the glories of infanticide. Celebrating the launch of herself and her peers into this next phase of their life-journey, she’s stumping for legal authorization to snuff out pre-born people as their life-journey is just barely beginning.  Call it a dash of pre-diploma irony.

Then, after recovering from that initial reaction, I admit to being rather impressed, even stirred, by this young woman’s boldness. To be sure, her crusade is gruesome, appalling, literally lethal for millions of tiny human beings. She’s squandering her passion on an abomination. Her commitment to what she believes, however? Wow. Give me a million like her on the side of life and decency.

Would that each of us grieved over legalized child-sacrifice were as sold out to our convictions as is this eighteen-year-old student. Or that each of us standing sentry over young people being eyeballed by today’s sexually addled predators and gender-mongers were as fearless as she in carrying out our responsibility.

Elementary school teacher Tanner Cross evidently gets it; and has purposed to live it out.  Happily, in this instance, a clear-thinking judge had his back. Next week, next month, next year? Some other less sagacious jurist might high-five someone pushing the more fashionable sexual-anarchy agenda. As long as the secularists, the hedonists, the godless keep at their mephitic game? Scheming and maneuvering to overthrow the undying fundamentals that have best served humankind for ages?  The godly opposition mustn’t flag either — for as long as it takes until that day arrives when truth does prevail, finally and imperishably.

And again, the conflict will be long. Dig in. Keep pushing back. Our adversaries surely will be.

The post Combative Right vs. Radical Left … The Battle Goes On and On and On …. appeared first on DailySurge.