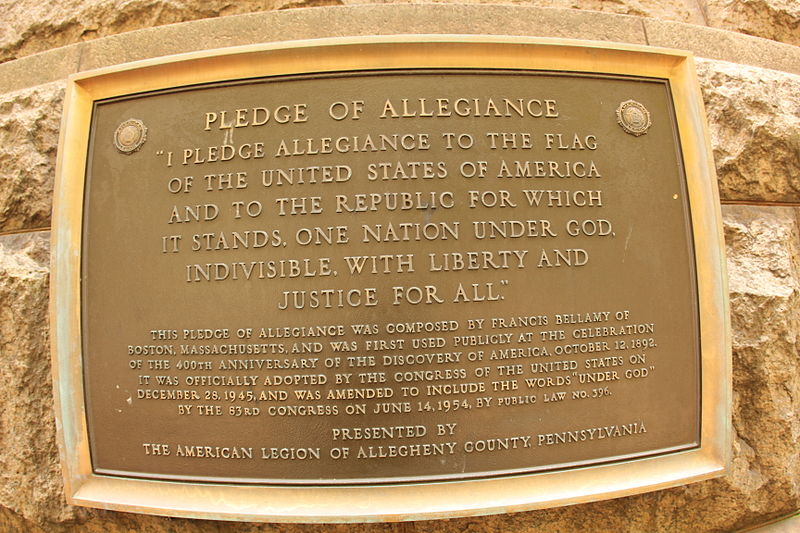 Surge Summary: A graduating Fairfax, Virginia student lately invoked America as “One Nation Under Allah”. The Muslim God Allah is quite different from the Judeo-Christian God of the Bible whose teaching infused the early founding of America. Muslims in America, in fact, enjoy freedom of religion because of biblical ideals that informed the nation’s Constitution.

Over the weekend a student of Justice High School in Fairfax, Virginia led the graduation ceremony in the Pledge of Allegiance. In this public school setting, when she got to the part about “One Nation Under God,” she said, instead, “One Nation Under Allah.” This was apparently without any permission from school officials.

The idea of “One Nation Under Allah” is a natural outgrowth of the idea of “multi-culturalism,” but it is far from our history. It is true that in some Muslim-dominant nations, Christians there use the name “Allah” for God. But it’s also true that the Allah of the Qu’ran is different than the God of the Bible. Presumably the student used the opportunity to tweak the noses of those who believe in the Judeo-Christian tradition of America as “One Nation Under God.”

“One Nation Under God” allows the atheist, the Muslim, the Buddhist to practice what they wish.

“One Nation Under Allah” restricts freedom of those who disagree—even fellow Muslims of a slightly different stripe.

The idea of multi-culturalism may sound good to the naïve. While we can learn something from virtually every culture, to say that all cultures are the same is ignorant. They are not.

In places where the worship of Allah is compulsory, there is little room to disagree. Even a lot of Muslims find restrictions under strict Islam troubling. We don’t have a lot of Americans lining up to go live in Iran or Pakistan or Afghanistan. But there are many Iranians and Pakistanis and Afghanis lining up to try and live in America.

Here’s what Rabbi Daniel Lapin once told me in a television interview for D. James Kennedy Ministries video, What If Jesus Had Never Been Born?, “The easiest way to answer the question of whether life on planet earth is better because Jesus walked Jerusalem or not is very simple, and that is: Just watch the way people vote with their feet. Watch where the net flow of immigration is in the world today. Is it from Christian countries to non-Christian countries or the other way around? It is so obvious.”

America shines like a beacon because America is “One Nation Under God.”

Although the secularist denies it and gnashes his teeth at the idea that the Christian God had anything to do with the founding of America, the evidence abounds in the actual documents, e.g., The Annals of America (Encyclopedia Britannica, 1976) or the Avalon Project (on-line) of Yale University.

In their own words:

And on it goes.

The Pilgrims and the Puritans and the Quakers who founded British North America fled Mother England and other countries to get away from religious tyranny—in that case tyranny from professing Christians.

James Madison, a key architect of the Constitution, wrote the Memorial and Remonstrance (1785). In this document, he notes that as Christians we must have tolerance for those who have not yet been enlightened by the Gospel of Christ.

Said Madison, “Whilst we assert for ourselves a freedom to embrace, to profess, and to observe the religion which we believe to be of divine origin, we cannot deny an equal freedom to those whose minds have not yet yielded to the evidence which has convinced us. If this freedom be abused, it is an offence against God, not against man: To God therefore, not to men, must an account of it be rendered.”

And thus, the founders established a nation where there would be no “establishment” of religion—nor would the free exercise of religion be squelched. This was understood for the first 150 years of American jurisprudence as meaning there would be no national church in America. In Britain, they have the Church of England. But there’s no Church of America.

But now the secularists have been imposing in effect a religious system of secular humanism. Rabbi Lapin calls them “the secular fundamentalists.” They are like the mullahs of Islam, only they seek to impose secular orthodoxy, including sexual libertinism.

And so, an “enlightened” student in America calls this country “One Nation Under Allah.” But that is so far from our history and is totally anathema to freedom. Only as “One Nation Under God,” do people, even of the Islamic faith, enjoy liberty in America.

Image: By daveynin from United States – Pledge of Allegiance plaque, CC BY 2.0, https://commons.wikimedia.org/w/index.php?curid=35727833

The post The United States of America: ‘One Nation Under Allah’? Ummm … No appeared first on DailySurge.