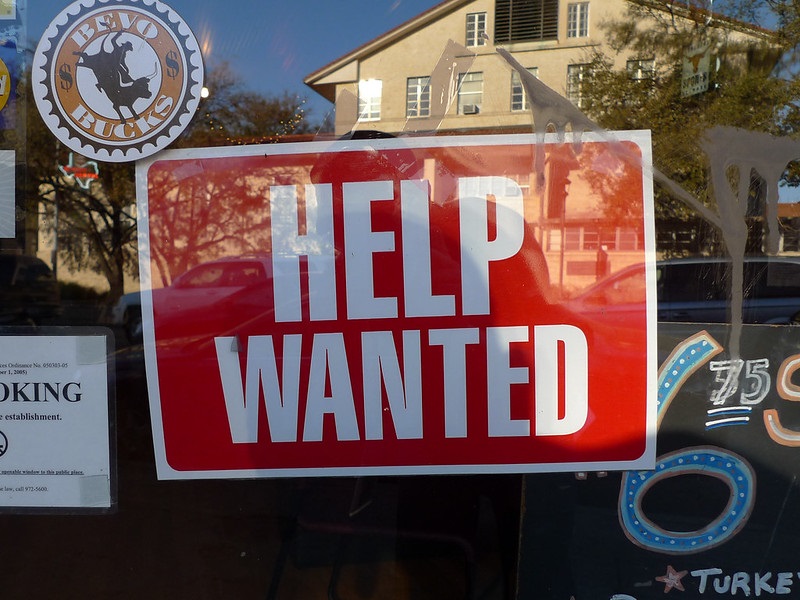 Surge Summary: The indicators are overpowering: Multitudes of Americans are not returning to work because the government is financially carrying them in the wake of the COVID-19 pandemic. It’s obvious – but that doesn’t mean Joe Biden and Co. are willing to admit it.

I was chatting with my barber the other day and inquired why there’d been such a long wait for a spot in the chair that morning. Her reply was unexpectedly mordant — and blunt: Only one person had been available to do the cutting when the shop opened because “we can’t get anyone to work.”

“Don’t you know that’s a myth?” I replied ironically. She smirked and continued clipping away.

These days George Orwell is every conservative’s go-to guy for punchy, memorable quotations. The British author was hardly a “right-winger” himself — by his own assertion, in fact, a “democratic socialist“. That doesn’t mean he’d be enamored with the likes of Chuck Schumer or Nancy Pelosi. It’s plausible he’d be horrified by most contemporary Western liberals. Or Democrats.

Recall, Orwell is the celebrated epigrammarian who first said, “the restatement of the obvious is the first duty of intelligent men.”  In this regard, the above Leftists and their ilk would have to be classified as “anti-Orwells”. They seem fixated on dismissing, even disguising, the glaringly self-evident about so much; unemployment numbers included.

Of course, for exhibit A I have in mind President Joe Biden. After two disappointing monthly job reports in a row — April’s downright catastrophically so — he’s unshakably assured us there’s zilch truth to the charge that millions of unemployed Americans are forgoing an employment search because COVID-19 relief payments are making it more lucrative to remain loitering at home.

“I know there’s been a lot of discussion … that people are being paid to stay home rather than go to work,” admitted the Chief Exec. But then: “Well, we don’t see much evidence of that.”

Despite abysmal job-creation stats, Biden scoffed at what he waved off as  “loose talk that Americans just don’t want to work,”

So, that settles the economic debate, Mr. President?

Point of fact, anecdotal indicators and a trove of collected data (Bureau of Labor Stats and business surveys) signal there is, indeed, a hiring problem. This also tracks with common sense: as my father has said, “Pay people not to work and they won’t work.” That truism isn’t rendered inoperative just because the “don’t work” payments are gussied up as “COVID-relief”. Or because our forty-sixth president says it ain’t so.

Experience affirms you generally get more of what you subsidize financially — in this latest case, we’re subsidizing non-working people; and they are gladly cooperating. The editors at National Review put it this way in their June 1 edition: “One thing the government is good at doing is getting more of what it pays for: in this case, idleness.”

As with everything in life, there are doubtless exceptions to this pattern, but it does appear to be a genuine, broad and regrettably debilitating phenomenon. Applying some available street smarts to the matter should have predicted all this long ago.

We are seeing the debasement of common sense in full bloom now on the economic front. … All the Biden folks needed to do was stop gazing into their cracked crystal ball and go outside and ask business owners if they can find workers. …  Instead, the liberals paid attention to some cockamamie econometric model saying you can pay people more not to work and it won’t change their behavior. Brilliant. … Here is a simple, ironclad law of economics for the “science” mob on the left. If you tax something, you get less of it. If you subsidize something, you get more of it.

Pundit Larry Elder lays it out for the reality-resistant:

President Joe Biden rejected the elephant-in-the-room possible explanation for the disappointingly low April job numbers—that the generous provisions in the COVID-19 relief packages, coupled with state and local aid, create a disincentive for people to go back to work.

Now let’s see, where did this Administration put that Occam’s Razor when they needed it?

Marc Thiessen startlingly specifies “a recent paper estimates that 48 percent of workers still make more from unemployment benefits than they would from working.” Got that? Closing in on half of those who ought to be laboring are finding themselves better off waiting for their D.C- and state legislature-provided bail-out checks.

He further adds the benefits don’t stop with mere dollars:

“[T]hanks to Biden, [recipients] can get some of [the payments] tax-free — because the president’s covid-19 relief legislation included a $10,200 tax exemption for individuals on unemployment, and $20,400 for married joint filers. Why would someone work long hours to earn [a weekly paycheck] when they make more and pay less in taxes by doing nothing?

I lately heard a guy unembarrassedly chatting about the thousands of dollars he’s been receiving every month since this grand, tax-payer fueled giveaway began. To be clear, he’s collecting this scratch for doing nothing. In a Brobdingnagian case of understatement, regarding the money bonanza that’s been fire-hosed into his bank account since coronavirus lockdowns began, he blandly remarked, “That helps”. Conspicuous bottom line? The chap’s in no hurry to procure meaningful work.

On the other hand, the Washington Post reports a Department of Labor spokesperson agreeing with President Biden, avowing his shop “has not seen evidence” that the government monies incentivize indolence.

No evidence, I suppose, other than centuries of consistent human experience, history and unforgiving real-world logic: Enable people to forswear employment — literally reward them for it — and they’ll settle into that unproductive path; for as long as they can.

Denmark once offered workers five years of unemployment. Then they noticed that workers found work after exactly five years. So, Denmark cut the benefit to four years. Then most workers found jobs after four years. Now Denmark, wisely, has cut benefits in half. Incentives matter.

Finally, there’s these penetratingly timely pearls of wisdom from an ancient, venerable source:

“The person who labors, labors for himself, for his hungry mouth drives him on.” (Proverbs 16:26)

Pile on the government bread and cheese, so to speak, at no cost, to all comers? They’ll be glad to kick back and take advantage of it — while enjoying their federal and state treasuries-funded vacation.

It’s beyond unnerving how quickly folks across this fruited plain have gotten acclimated to this enervating situation; to the “government-will-take-care-of-me” mentality that has locked in, especially among younger people.  It’s lethal for the public fisc and just as putrefyingly bad for the soul of Americans who were formerly reputed to be hard-workin’, can-do types; not gimme-gimme’s with their hands outstretched for the next freebie.

Sloth– among the most infamous of “deadly sins” — has been long condemned. Government’s encouraging it via short-sighted, politically driven and ultimately counterproductive policies? While breezily insisting it isn’t doing so? A wise society will direct some spirited condemnation that-a-way as well.

The post Gov’t Paying Americans Not to Work … Biden Insists That’s Not a Problem appeared first on DailySurge.