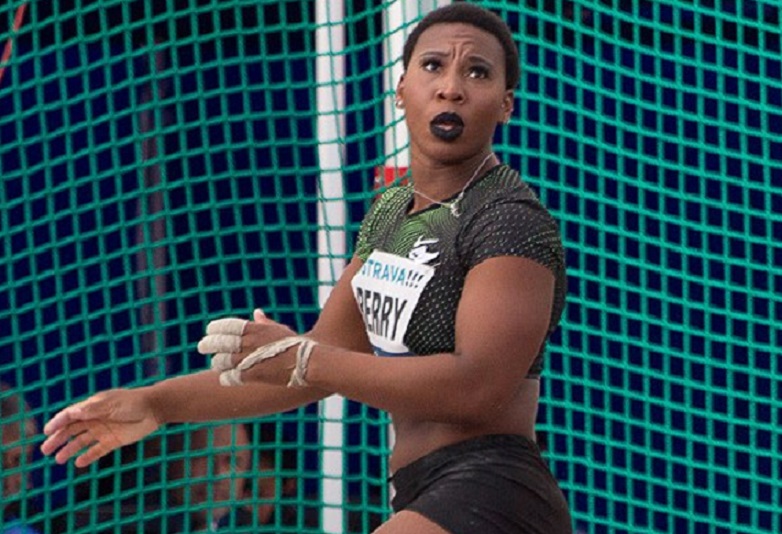 Surge Summary: Olympic athlete Gwen Berry dishonored the American flag upon her recent receipt of a medal. Some are calling for athletes like her to be disqualified from officially representing a nation they clearly despise.

Another American Olympic athlete, Gwen Berry, who excels in the hammer throw, decided to hammer her country over the weekend.  When Berry was accepting her third-place medal in the U.S. Track and Field competition, she became furious when our national anthem was played.

Berry threw a shirt over her head.  She turned away from the flag.  Sadly, she demonstrated that even though she is a good athlete, she is an ingrate who has no respect for America.

Berry insisted that she had been set-up by the U.S. Olympic Track and Field organization, saying:

“I feel like it was a set-up, and they did it on purpose.  They said they were going to play it before we walked out, then they played it when we were out there. . .  But I don’t really want to talk about the anthem because that’s not important.  The anthem doesn’t speak for me.  It never has.”

U.S. Track and Field officials denied Berry’s claim, and suggested it was just bad timing.  Bad timing to play the national anthem?  Shame on them!

It’s disgusting and depressing that we have anti-American athletes like this.  But what’s worse is that leaders of American universities, corporations and athletic organizations tolerate it.

This is very simple:  If you’re unwilling to respect our flag and national anthem, you will not represent the United States at international competitions no matter your athletic abilities.

Go try out for the Russian or Chinese communist teams.  But you will not have our stamp of approval so you can urinate on the United States while the whole world is watching.  We will not cooperate in our own decline by elevating haters of our country.

In a healthy self-respecting society, such a rule would be easy to implement.

And there’s something you can do, too.  Don’t just rail against those who don’t love America.  Demonstrate how much you love America.

My friends, July 4th is coming up.  Please demonstrate what true patriotism looks like.  Make sure the flag is proudly flying outside your home.  Take your family to decorate the graves of our veterans.

Use this Independence Day to do something patriotic with your family.  Show what a real patriotic American looks like and how they act.  It’s never been more needed!

The post Olympic Winner May Be an Impressive Athlete … But She’s a Terrible Sport appeared first on DailySurge.