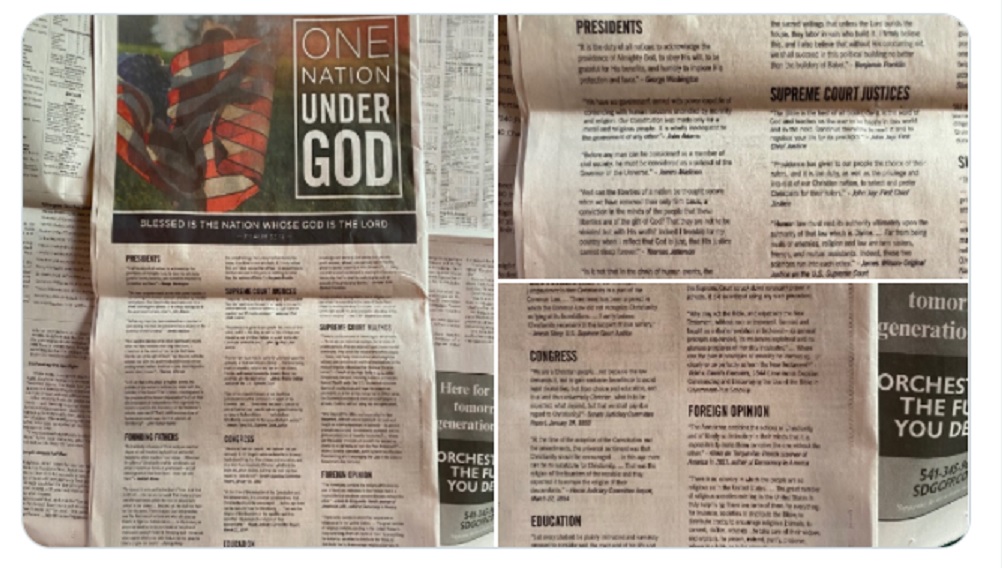 Surge Summary: On July 4th, the Hobby Lobby corporation took out a full page newspaper add in a number of American newspapers celebrating the nation’s Christian heritage and encouraging it to do things God’s way. Naturally, hysteria followed from those who oppose biblical influence in the United States.

On July 4th, Hobby Lobby took out a full-page ad in multiple newspapers featuring a prominently placed verse from the Bible along with numerous, pro-Christian, pro-Bible quotes from our Founding Fathers and other key leaders in our history. It then closed with an appeal to seekers to find out more about Jesus. The response has been quite shrill, if not downright hysterical. But is the response in any way justified?

According to a headline on the popular gay atheist blogsite, Joe My God, “Hobby Lobby Goes Full Dominionist In July 4th Ad.”

A viral tweet claimed, “Hobby lobby took out a full page ad in the Register-Guard this morning. Talking about how America should only be led by Christians. Absolutely frightening.”

Another tweet alleged, “Full page of dominionist propaganda in this morning’s @BostonGlobe courtesy of @hobbylobby. #separationofchurchandstate”

And still another tweet (and there are more cited by Joe My God) claimed, “Hobby Lobby’s owners should look at the US Constitution. There’s no litmus test for religion to hold public office. And there’s surely no mandate for a theocracy.

“Also, they might want to review the 10 Commandments since they’re fond of stealing artifacts from other countries.”

Snopes.com actually devoted a page to examining whether it was true that, “On Independence Day in 2021, Hobby Lobby crafts store placed an ad in several newspapers that read: ‘One Nation Under God.’” (The verdict: yes, it’s true!)

But what does the ad actually say? Is Hobby Lobby guilty of preaching dominionism? Of suggesting that only Christians can run for office? That America should only be led (or populated) by Christians?

The Hobby Lobby website provided a link to the ad with options to download a JPEG or PDF version, so anyone can check out the content and read it for themselves.

It features a large picture of an American flag and next to it the words, “One Nation Under God.”

So far, so good. That’s what we still say in the Pledge of Allegiance, and that is certainly the hope of ten of millions of Americans today.

Next is a quotation from Psalm 33:12, “Blessed is the nation whose God is the Lord,” in all caps.

This is a universal biblical axiom, and one that has been shared by generations of a predominantly Christian-professing America. We believe that to be true, but we are not seeking to enforce that.

Some of the quotes simply remind us that our founders believed that Christian faith was indispensable to the success and stability of our nation.

For example, John Adams stated that, “Our Constitution was made only for a moral and religious People. It is wholly inadequate to the government of any other.”

And Jedidah Morse opined that, “Whenever the pillars of Christianity shall be overthrown, our present republican forms of government, and all the blessings which flow from them, must fall with them.”

More broadly, the ad quoted Thomas Jefferson, who asked, “Can the liberties of a nation be secure when we have removed a conviction that these liberties are the gift of God?”

Other quotes were broader still, including a quote from the non-Christian Benjamin Franklin, pointing to the deity’s providential care over the world.

And there were quotes pointing to the supremacy of the Scriptures, like this, from the first Chief Justice, John Jay, who wrote, “The Bible is the best of all books, for it is the word of God and teaches us the way to be happy in this world and in the next.”

That being said, there were other quotes that affirmed that America was founded as a Christian nation, that Christians were best suited to lead the nation, and that the Christian faith lay at the root of our legal system.

For example, John Quincy Adams said, “Is it not that the Declaration of Independence first organized the social compact on the foundation of the Redeemer’s mission upon the earth?”

John Jay also said, “Providence has given to our people the choice of their ruler, and it is the duty, as well as the privilege and interest of our Christian nation to select and prefer Christians for their rulers.”

The Freedom from Religion Foundation posted a rebuttal to these quotes titled, “In Hobby Lobby We Don’t Trust.” This was followed by, “Do these quotes prove we are a Christian nation? Click them to find out.”

In sum, Freedom from Religion would argue that America never was a Christian nation and that Christianity should have no special influence over America today.

In response to all this, I would say that: 1) I understand Hobby Lobby’s intent, seeing that American history is under such attack today and our founding is being mourned rather than celebrated. In that regard, I appreciate what they did. Our nation does have many biblical roots.

3) That being said, I do understand how others would read the ad as advocating for a theocracy (which I wholeheartedly oppose) and as for claiming that only Christians should run for office (which is ridiculous).

That is unfortunate, and that’s why it’s important for us to make clear that we are not seeking to take over America and impose the Christian faith on the nation.

What we do believe is that God’s ways are always best, and that’s why we advocate for biblical principles and seek to live by them personally.

In the same way, others (such as atheists, agnostics, Hindus, Muslims, or secular activists) advocate for their own particular spiritual or secular worldviews and seek to live accordingly.

This is all part of the fabric of our nation.

In short, I do believe that the more truly Christian we are. the more blessed we will be as a nation. But we are not forcing this on anyone (God forbid), and we live by the rules of a Democratic Republic.

Since the Hobby Lobby ad will get a lot of negative attention, let’s be prepared to affirm what we do believe and deny what we don’t.