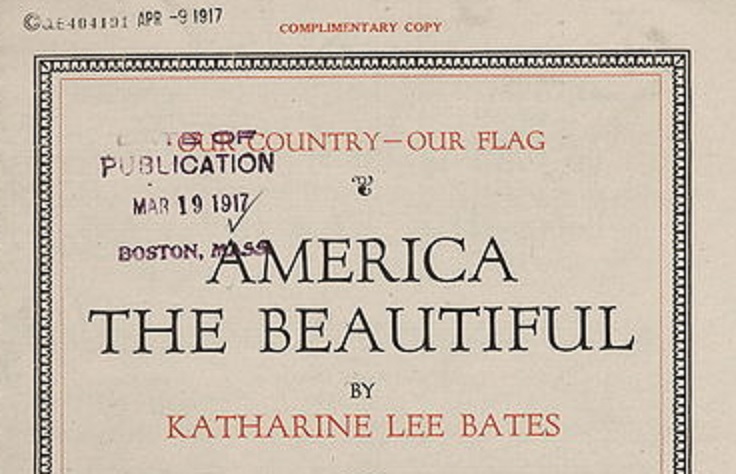 Surge Summary: Some of the largely unknown lyrics of “America the Beautiful” offer the solution to the nation’s current problems – if people bother to know and pay attention to what is being sung.

It’s a sad human tendency: we repeatedly take up familiar, even generationally popular, songs, humming the melodies, intoning the lyrics — but end up missing a considerable chunk of what’s actually being communicated. Christmas carolers, of course, are notorious for this: so many cherish the tune, hum along with it, belt it out. But the import of its hoary sentiments? Too often they fly right by. “Hark the herald angels sing”? “Echoing their joyous strains”? “God rest ye merry gentlemen”? “Why lies He in such mean estate”?

It’s all quite profound. Thematically formidable stuff — if you bother to pay attention to what’s being crooned.

We were singing “America the Beautiful” in my church’s worship service this week (Independence Day providentially fell on a Sunday this annum) when it struck me with renewed forcefulness that this red-white-and-blue standard is, literally, a rather bracing prayer for the nation. For those — probably comparatively few — familiar with the piece’s background, its religious overtones shouldn’t come as a total surprise: In 1893, Katherine Lee Bates composed the poem that eventually came to be known as today’s “America the Beautiful”. (She opted initially for the title “Pike’s Peak”). It made its publication debut two years later in the church-affiliated newspaper The Congregationalist.  Bates amended the original lyrics in 1904 and this became the authorized adaptation so beloved currently (the work’s settled melody was provided by Newark, NJ church organist Samuel A. Ward.)

To be sure, Christian themes are all over “America the Beautiful” — and those “with eyes to see” and “ears to hear” ought to find them hard to miss.

The oft-warbled phrase “America! America! God shed His grace on thee” isn’t meant a declaratory statement of something that’s already happened. It’s instead a cry to the Creator to bless a desperately needy nation; shorthand for: “Hey, America, may God shed his grace on you.”

The next, also well-known, line continues in the same vein: “And crown thy good with brotherhood/From sea to shining sea”; i.e., “May God crown your good …”.

Regrettably, although stanzas two and three of this July 4th perennial arguably make even more conspicuous spiritual (Judeo-Christian) overtures, they’re rarely heard, nevermind sung, by the masses. An unfortunate cultural accident? Or is it somehow by design from a society which prefers sobering references to the Judge of the Universe not intrude on their enjoyment of anodyne patriotic nostalgia?

America! America!
May God thy gold refine
Till all success be nobleness,
And every gain divine. [Emphasis mine]

Hold on! Gold refined by God? This is nothing shy of an appeal to the Holiest Being of All to cleanse this Republic of any of its moral and historic impurities. This musical contemplation isn’t merely pushing flag-waving, cook outs, fireworks and nationalistic warm-n-fuzzies. It’s inviting a national self-searching — and for the American singing along, perhaps something even more uncomfortable: a personal examination.

Then there are the verses from the second stanza that comprise what is perhaps the most trenchant of this holiday favorite’s beats:

Flaws to be mended … in the United States? Good grief … and Ouch. Not especially “feel-good” material, is it?

But unwelcome or not, the mention of America’s genuine shortcomings is crucial; perhaps never more so than in the twenty-first century.

What, after all, was going on across “the fruited plain” this most recent Fourth of July weekend? Isaiah chapter five might encapsulate the situation better than any other Scripture:

“Woe to those who call evil good, and good evil;
Who put darkness for light, and light for darkness;
Who put bitter for sweet, and sweet for bitter!” (NKJV)

America’s values, her priorities, her folkways, even her laws? They’re turned upside down, inside out from what they ought to be. When attempting to identify those USA “flaws” which need “mending” … where to begin?

— “Lawfully” murdering its unborn children by the hundreds of thousands (at least!) every year.

— Transmogriphying LGBTQXYZ-related concerns even to the point of perverting notions of marriage and family into an abomination.

— Taxpayer-underwritten hand-outs increasingly making it easier for individuals to not work while predatory government regulations, fees and tax-rates intensify the challenge of earning an honest living (for those who care to try.)

America’s elected and appointed leaders tirelessly stoke racial division, class envy, victimhood. Her culture has forged pleasure and entertainment into a devouring idol — voraciously fattening itself on lewdness, coarseness, violence. The Judeo-Christian heritage — which likely contributed the lion’s share of fundamental precepts making this country the most prosperous ever — is unrelentingly ridiculed and rejected at nearly every pass.

On and darkly on the list of national scandals goes — and grows.

You may note this largely ignored portion of the cherished anthem extols “liberty” and “self-control” — both of them briskly Bible-centric ideals. The “liberty” in view, remember, is bracketed by “law”, i.e., personal responsibility; a sense of community; right and wrong; the “law of Christ” (1Corinthians 9:21; Galatians 6:2). Its goal? Not self-indulgence; indubitably, not anarchy. What it is, instead, is freedom to do what is just and proper. “Ordered liberty” is the phrase often preferred for this constitutional — and scriptural — concept.

“Self-control”, meantime, is commended because a people can only flourish if this trait is embraced. A deficiency of self-control equals eventual self-destruction. It’s a quality produced by God’s Spirit (Gal 5); and presently, grievously lacking on so many modern fronts.

Over a century ago, songstress Bates grasped the essentialness of what is frantically needed nowadays: an American change of heart. Someone (likely not de Tocqueville) once remarked that this nation was “great” because she was “good”. So what are we to expect when the land abandons her goodness? Abandons God?

A new president isn’t going to solve the problem. Neither the elevation of the next political superstar, nor more rearranging of the Supreme Court. A passel of new laws won’t do the trick, nor a victory for a social cause here and there. As consequential as can be all the aforementioned, either God visits America and spiritually awakens and revives her or the nation is cooked.

May we who love this Republic — and love our Lord even more — remember that rock-bottom reality the next time we strike up “America the Beautiful”. And be sure to include those glorious-but-too-frequently-neglected verses while we’re at it.

The post What the Nation Needs Is Hidden — Sort of — in ‘America the Beautiful’ appeared first on DailySurge.