(TeaParty.org Exclusive) – Remember back when Joe Biden first got “elected” to take over the White House thanks to the Democratic Party and the massive voter fraud they used to make it happen and he promised that he would work toward “unity” and bringing the country back together?

Well, to the shock of no one, this appears to have been just another typical lie flowing from the lips of a politician who wants to play pretend that he’s a good person and the right man for the job of president, a man flowing with integrity.

According to Infowars, Joe Biden stated that supporters of President Donald Trump were “insurrectionists” and that they were worse than the Civil War Confederacy.

Because nothing says “unity” like making a wild base assumption about an entire group of individuals and essentially calling them evil, vile racists who like slavery.

Biden made the comment during a speech he delivered on Tuesday in Philadelphia, Pennsylvania, giving more pushback against current Republican efforts to try and launch a forensic audit of the November election results in the state.

“We are facing the most significant test of our democracy since the Civil War,” Biden stated during his address at the National Constitution Center. “That’s not hyperbole…The Confederates back then never breached the Capitol as insurrectionists did.”

Biden says Trump supporters are worse than slave-owning Confederates: “We are facing the most significant test of our democracy since the Civil War. That’s not hyperbole…The Confederates back then never breached the Capitol as insurrectionists did”

Biden then went on to insist that no other election has been “under such scrutiny or high standards” as the previous 2020 election, going on to call accusations of fraud a “big lie.”

“It’s clear, for those who challenge the results or question the integrity of the election, no other election has ever been held under such scrutiny or such high standards. The ‘Big Lie’ is just that, a big lie,” Biden continued.

He then alleged that conservatives have committed “election subversion” with the efforts they have put into trying to get audits going in several states, including Pennsylvania.

“This is election subversion,” Biden said on voting bills being passed across the nation.

“It’s the most dangerous threat to voting and the integrity of free and fair elections in our history” pic.twitter.com/ztRlhrDnLX

“To me, this is simple. This is election subversion. It’s the most dangerous threat to voting in the integrity of free and fair elections in our history,” Biden went on to say.

“They want the ability to reject the final count and ignore the will of the people if their preferred candidate loses,” he added.

Then Biden seemed to toss out a veiled threat against folks on the conservative side of the political spectrum.

“It gives me no pleasure to say this,” he stated. “I never thought my entire career I’d ever have to say, but I swore to you to god to preserve, protect and defend the constitution, that’s an oath that forms a sacred trust – to defend America against all threats both foreign and domestic.”

President Donald Trump reminded Americans on Tuesday that Biden was only in the state of Pennsylvania to try and obstruct the efforts being made by the Republican Party to get a forensic audit going in the state.

“Joe Biden is going to Pennsylvania today in a rush in order to stop the Forensic Audit that the Pennsylvania Republican Senate is in the process of doing,” Trump stated in an email message sent to supporters.

“Philadelphia was a cesspool of corruption, which will soon be revealed by the audit. Why are they so concerned that a President, who never goes anywhere, would hop onto beautiful Air Force One and head to Philadelphia if it were an honest election? Why not let the audit go forward and make everybody, on both sides, happy?” Trump asked.

Video: Biden Advocates For The Right To Vote 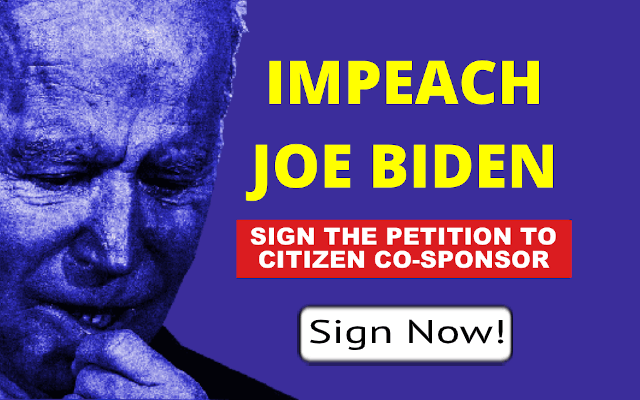