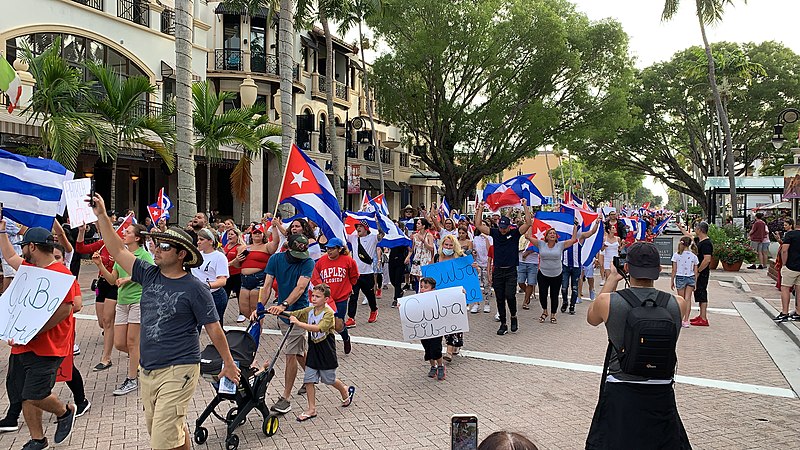 Surge Summary: As the people of Cuba rise up in protest against their oppressive government, American Leftists make excuses or stay silent about the Communist regime. President Donald Trump spoke out against Cuban tyranny. Joe Biden’s response as Vice-President and now President has been weak, and even dishonest.

Realists and scores of fair-minded Americans believe that Biden is the radical Democrats’ tool for socialism and has not really accomplished anything since taking office. He talks a lot about vaccines yet stubbornly refuses to give even a scintilla of credit to Trump, who showed his leadership in the “Warp Speed” production of vaccines in nine months! He is, though, proficient at dividing Americans and doling out financial giveaways while our national debt will soon exceed $30 trillion, inviting economic collapse.

Biden has artificially inflated media coverage, keeps the lightest schedule of any president in history and stumbles through pithy, prepared speeches from a teleprompter. His rhetoric of unifying and “building back a better America” rings hollow while he’s uninspiringly demonstrating no real problem-solving ability after seven months in office.

On critical issues, he’s causing much harm to America. Consider the unprecedented border crisis (he denied it even existed for three months), soaring violent crime, election fraud, runaway inflation, escalating narcotics, disturbing gas prices, skyrocketing debt and Russian hacking. He comes up woefully deficient, and we should all be rightly concerned.

Biden went to Philadelphia recently and embarrassed us before the world, labeling each state’s constitutional right to shore up and safeguard election integrity as “the most significant threat to democracy since the Civil War.” This was disgraceful and dishonest! Kamala Harris, meanwhile, showed how out of step with reality she is, citing “Kinkos” on the same issue although they went out of business 13 years ago!

Critical comments from both sides of the aisle underscore more bad news for Biden: his inept handling of the unfolding Cuban crisis.

— Astute observers were aghast when he went to Florida and wrongly accused Trump of blocking Cubans emigrating to the U.S. when in reality it was he and Obama who halted the “Wet Foot/Dry Foot” policy in 2017.

— His key ally in Congress, Cuban American Sen. Bob Menendez, admitted that Biden and Obama policies for Cuba “showed themselves not to succeed.”

— His State Department spokesman, Ned Price, confessed, “Unfortunately in the case of Cuba there may be more that has not worked than has.”

— Richard Feinberg, Clinton’s national security adviser, publicly faulted Biden for “failing to prioritize Cuba policy from the outset and now he’s boxed in with the protests.”

— Biden’s team’s recent meeting with Marxist Black Lives Matter activists continues to undermine his credibility as they blamed America for Cuba’s plight and praised the Cuban regime! They blatantly lied in accusing America of “undermining Cubans’ right to choose their own government” when the last free election was in 1948. Their ally, $20 million man Colin Kaepernick, praises Castro and even wears a T-shirt with his image.

U.S. Sen. Marco Rubio said as a Cuban American, “The extortionist organization known as BLM took a break from shaking down corporations for millions and buying themselves mansions to share their support for the communist regime.”

Incompetence means “unable to do something successfully.” It’s on full display with Biden and only worsens with his cognitive decline.

After 70 years of totalitarian rule and barbaric treatment of dissidents daring to question the socialist state, thousands of demonstrators took to the streets. The Cuban people, just like citizens in socialist Venezuela, are suffering under another economic crisis with severe food shortages, high prices and pandemic sickness and death.

Communications remain cut off, so the world can’t see the military’s brutal shooting and beating of the protestors.

Progressive leftist “revolutionaries” masterfully manipulate the masses. Radical rabble-rousers in Cuba and America present “history” that does not reflect reality but romanticizes “heroes” like the Castros and Che Guevara (murderers and criminals) while working aggressively to dismantle foundations and founders of countries. They’re doing this in the U.S. through critical race theory and the 1619 Project, whose creator praised Cuba as the “Most equal country in the Western Hemisphere—a model for the U.S.” Americans are awakening to stop this wicked propaganda in our schools!

In 1959, Fidel Castro assured the world that he was not a Communist. As he took office, he said he was a “Marxist” (like BLM leaders), leading his people on a pathway to peace and prosperity.

Castro called himself a “freedom fighter” yet he eventually curtailed any ownership of private property and private enterprise. He told the people, “Universities are tuition free” (but only to those embracing his revolutionary beliefs). He took control of media communications (sound familiar?) and pioneered “cancel culture” way before progressives did here!

People trying to flee Cuba were tortured and executed. Castro killed over 3,500 people by firing squad. In 1994, he was caught as he ordered a tugboat of women and children sunk while they were fleeing the repressive socialist state.

Government took control of elections with its one-party state (like the Democrats have done in New York and California and continue through their “open borders” scheme to replicate in Texas, Arizona, New Mexico and more, manipulating outcomes. He called Cuba a “People’s Paradise,” yet what was once a beautiful vacation destination (remember Ricky Ricardo and his lavish Havana lifestyle?) became a prison where people lost liberty, human rights and freedom of religion.

Castro demolished scores of church buildings and mandated children be indoctrinated in atheism. Their form of “critical race theory” propagandized the people into believing Cuba’s old order was systemically evil and needed to be replaced with the new order of caring for needs from cradle to grave. “Free health care! Free education! Government giveaways!” Do you recognize this progressive strategy anywhere else?

Pre-Castro Cuba in 1958 led Latin America in low infant mortality, literacy rates, passenger cars per capita, food consumption per capita along with TVs, radios and telephones. Cuba’s Gross Domestic Product was ahead of Italy, Spain, Ireland, Greece, Portugal and most of Africa, Asia and Latin America!

Today Cuba is an impoverished nation with minimal and archaic health care, contrary to Michael Moore’s documentary, Sicko, which was replete with propaganda. Higher education? It’s possible for the elite who meet very rigid standards.

The average wage in Cuba is about $20 per month with people living in deteriorating shacks similar to Nancy Pelosi’s San Francisco homeless haven. Its harbor is almost empty of boats so people cannot flee. The few people who own cars have 1950 models. On an island with a population of 11 million, 1.5 million have escaped. In spite of this, half of American Millennials choose socialism over capitalism—God help us!

When Fidel Castro died in 2016, Obama eulogized him: “History will record and judge the enormous impact of this singular figure on the people in the world around him.”

The Obama/Biden administration sought to reestablish diplomatic relations with Cuba; establish an embassy in Havana; have US officials visit; reconsider Cuba’s designation as a “state sponsor of terrorism and make provision for trade. Obama went to Havana to attend a baseball game with Castro, and the global photo communicated Cuba’s “freedoms.”

Samuel Rodriguez, president of the National Hispanic Leadership Conference, expressed concern for these actions. “They served as a de facto endorsement of one of the most oppressive regimes in recent history.”

Meanwhile, Trump repeatedly expressed his empathy for the Cuban people and a firm commitment to foster freedom. His policies raised salaries of their counterparts in America (38% of Hispanics voted for him in 2020), but he also demonstrated strong leadership regarding his opposition to communism by employing a strategy to strangle their economy and engender discontent on the island to stir the Cuban people to seek change. Now, it’s paying off.

“Regard prisoners as if you were in prison with them. Look on victims of abuse as if what happened to them had happened to you” (Heb. 13:3, MSG).

Please pass this along to educate others as we declare, “Viva la Cuba por Jesus Christo!”