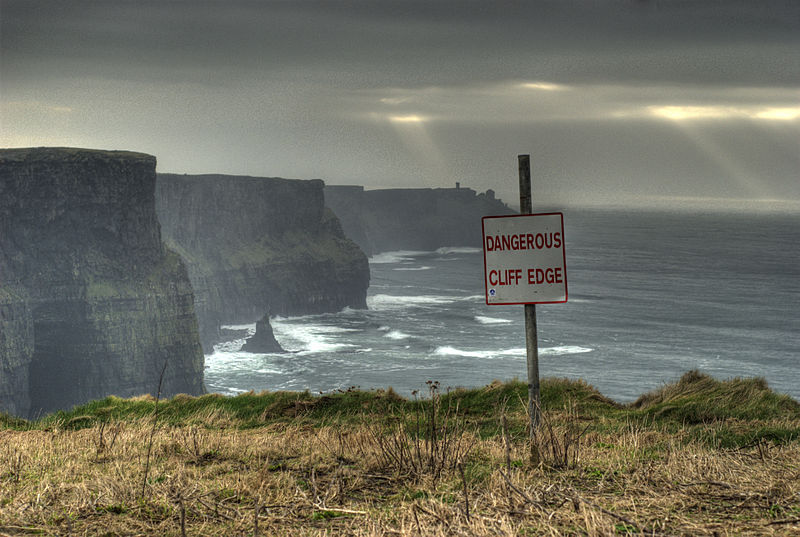 Surge Summary: America has been in a debt crisis for a long time. The COVID-19 hysteria is only worsening the situation. Is U.S. financial collapse inevitable? Soon?

Former Secretary of State Henry Kissinger warned in a Wall Street Journal article the coronavirus crises could lead to global economic doom. He wrote an opinion piece with a catastrophic proclamation that “failure could set the world on fire,” The elderly internationalist believes the Trump White House did “a solid job in avoiding immediate catastrophe.” He says the US needs to work quickly to find a cure, pitch in to rebuild the global economy, and protect the “liberal world order.”

Others express the same conclusion as expressed in headlines I’ve gathered: Complete collapse of economies’ ahead in Africa; Recession Bread Lines Forming; The evidence is clear: Democrats are pushing America toward economic disaster; and others.

If this economy brings America to her knees–it might be a good thing!

In an interview for his New York Times best-seller, Aftershock, Robert Wiedemer said, “The data is clear, 50% unemployment, a 90% stock market drop, and 100% annual inflation . . . starting as soon as next year.” Wiedemer has an outstanding record in that in 2006, he and a team of economists foresaw the coming collapse of the U.S. housing market, equity markets, private debt, and consumer spending and published their findings in America’s Bubble Economy. So, it would be prudent to assume he knows of which he speaks.

Hidden in the American Rescue Plan Act of 2021 is a new $570 million family leave account exclusively for federal workers. It provides a payment of $1,400 for a single taxpayer ($2,800 for joint filers), in addition to $1,400 per dependent. It provides National Endowment for the Arts $135 million; National Endowment for the Humanities $135 million, Institute of Museum and Library Services $200 million; Native American Language Preservation $20 million; Assistance to State Governments and District of Columbia $195.3 billion; Local governments $130.2 billion; to Tribal Governments $20 billion; and Territorial Governments $4.5 billion. There is over $166 billion to various boondoggles for public education; and much, much more.

I don’t usually write obscene statements, but the above paragraph is outrageously obscene. It is shocking that taxpayers have not flooded the Capitol and confronted the House and Senate and assorted bureaucrats. It seems Socialism is the drug of choice for leftist radicals in both parties.

Wow, in the past, such a spending bill would turn the town folk into raving anarchists rushing down the streets with flaming torches and pitchforks to tar and feather every Congressman and Senator who voted for such a monstrosity. But it was no big deal which shows how far we have traveled on the Road to Socialism.

We are almost there.

With the massive federal bailouts and loans to almost any entity, it is evident that we are slowly becoming a socialist nation functionally. The federal government is bailing out various cities and states that spent money like a drunken sailor. A good example is Chicago, where their deficit in 2019 was over 8 million dollars! Don’t you delight in bailing out cities or states that have been misruled by corrupt Democrats? We are also going to underwrite many insolvent pension funds and may forgive student loans.

But then, you paid your student loans, sucker. Or maybe you didn’t go to college, but you get to pay for those who did.

Of course, the money give-away is no surprise to many of us. After all, Socialists are in control. Obama told us he wanted to spread the wealth, and all informed people knew he was a Socialist. In fact, his talk and actions smell like old-fashioned Marxism! His former fellow comrade, Joe Biden is now Spender-in-Chief, and he is proving what we have always known him to be.

With the COVID lockdowns, hundreds of thousands of businesses have been permanently closed, while others are teetering on bankruptcy. Home foreclosures and job losses will continue in a free fall resulting in more business failures, and that will result in more job losses! Fewer autos, homes, television sets, appliances, etc., will be purchased, accelerating the slide into massive national and international chaos. Power bills and accelerating gasoline prices will push most suffering families over the edge. This will require families to live together, possibly even three and four generations.

The Gross Domestic Product (GDP) is the economic worth of all finished goods and services produced within the U.S. during a quarter or annually. With so many businesses and industries shut down or bankrupt, the GNP growth in the U.S. will increasingly look like other dying nations in Africa and Latin America.

The debt ceiling is the maximum amount of money the United States can borrow cumulatively by issuing bonds. It limits how much debt the federal government can carry at any given time but does not permit additional spending. Once the ceiling is reached, the Treasury Department cannot issue any more bonds to pay the national bills already incurred. The debt limit suspension expires July 31, and the debt limit must be raised (again) if federal obligations are to be fulfilled. However, raising the ceiling does nothing to address what caused the problem. Raising the ceiling in the past is the reason America is over 27 trillion dollars in debt! Consequently, Republicans are saying they don’t want to raise the debt ceiling again, fearful that the Democrats will show no restraint on additional spending.

Former Federal Reserve Chairman Ben Bernanke opined that not raising the debt ceiling is “like a family saying, ‘Well, we’re spending too much—let’s stop paying our credit card bill.’” How about cutting spending and paying the debts!

If you came home tonight and found your house full of sewage to the ceiling, would you remove the sewage or raise the roof? I would start shoveling the sewage and do whatever is necessary to stop the constant inflow. That means paying off our national debt, but that is like making payments on a new automobile you recently wrecked. Or making monthly payments on a dead horse. Moreover, raising the debt ceiling to get us out of trouble is like committing suicide because of fear of death!

This government is being run by Curly, Larry, and Moe resulting in all kinds of corruption and administrative failure. Moreover, it may become the most destructive, deceptive, and dangerous administration in American history. Biden’s star is fading fast, very fast, and he will be stumbling around in a dark White House long before his term ends.

If you are planning on Social Security or a corporate pension to support you, you may be standing on a bridge of mist.

With more masking mandates and more lockdowns, our economy appears to be blindly stumbling toward a precipice. It is so bad, big city businesspeople have restricted themselves to one, not a two-martini lunch, and big time CEOs are now playing miniature golf. And billion-dollar corporations cut their monthly bribes to various Congressmen; moreover, young Mormons are only taking one wife. But the worst is Motel Six won’t leave the light on for you.

The party is over, and you are in the dark.

(Dr. Don Boys is a former member of the Indiana House of Representatives who ran a large Christian school in Indianapolis and wrote columns for USA Today for 8 years. Boys authored 18 books, the most recent being Muslim Invasion: The Fuse is Burning! The eBook is available here with the printed edition (and other titles) at www.cstnews.com. Follow him on Facebook at Don Boys, Ph.D., and visit his blog. Send a request to DBoysphd@aol.com for a free subscription to his articles and click here to support his work with a donation.)

The post USA Headed for a Financial Cliff? Will COVID Provide the Final Push? appeared first on DailySurge.