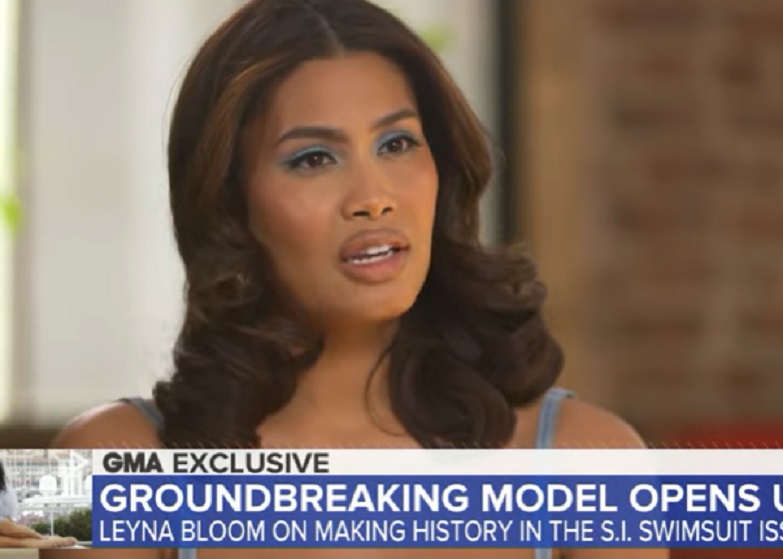 Surge Summary:  The debut of a “transgender woman” on the newest edition of Sports Illustrated‘s “swimsuit issue” is yet another indicator that without a nationwide spiritual awakening, America is doomed. Time to cry out to God to intervene; to transform the nation.

“I’m proudly choosing to live forever!” boosted transgender model Leyna Bloom, who now displays more than a face on the cover of the celebrated Sports Illustrated swimsuit issue. Don’t glance a second time passing through your supermarket checkout line. This “groundbreaking” cover model is the first transgender to appear in this spot.

Historian Edward Gibbon in his classic, The Decline and Fall of the Roman Empire, lamented an equally classic observation: “Bizarreness masqueraded as creativity.”

“Because, although they knew God, they did not glorify Him or give thanks to Him as God, but became futile in their imaginations, and their foolish hearts were darkened. Claiming to be wise, they became fools” (Rom. 1:21-22a).

The downward spiral into sexual anarchy is what follows: Reject truth, then lose discernment and descend into moral confusion.

When a people disregard divine design for sexuality they will exhaust the sin spectrum, plunging into the depths of depravity.

Heeding God’s Warning
Jesus warned us concerning this kind of moral insanity. “As were the days of Noah, so will be the coming of the Son of Man” (Matt. 24:37). Genesis 6:5 describes it, “The Lord saw that the wickedness of man was great on the earth, and that every intent of the thoughts of his heart was continually only evil.”

God was long-suffering, giving Noah’s generation 120 years to repent before the bowls of judgment were poured out. Considering the trajectory of our day, how much time do we have?

“Were they ashamed when they had committed abomination? They were not at all ashamed, nor could they blush. Therefore, they shall fall among those who fall; at the time that I punish them they shall be cast down, says the Lord … stand in the ways and see, and ask for the old paths where the good way is and walk in it and you shall find rest for your souls” (Jer. 6:15-16).

If it doesn’t happen, is the Second Coming imminent?

What’s Next on God’s Calendar?

In reading the signs that Jesus laid out concerning His return, participation, not passivity, is essential.

After unfolding the signs of the end of the age prior to His return in Mathew 24, Jesus gave an explicit parable dealing with alertness and action versus falling asleep. He said at midnight will come a cry to awaken us before He as our bridegroom comes back (Matt.25:6).

The midnight cry and the return of our Lord aren’t simultaneous. We need an awakening first, and that’s what God intends for our nation! Billy Graham said, “I’ve wept for America—she is in great need of a spiritual awakening”. This spiritual giant, now in heaven, said he prayed fervently for this every day.

Today our freedoms, our faith, our families and our future are all at stake. We’re engaged in a titanic, unprecedented struggle with forces of evil and must categorically reject wishful thinking that this is temporary, cyclical or manageable.

We are at a tipping point where either we pray fervently and engage passionately to hasten a Third Great Awakening or we will witness the fulfillment of A.W. Tozer’s prophetic warning: “Historians will conclude that we of the 20th century had the genius to create a great civilization, but we lacked the moral wisdom to preserve it.”

Amid horrendous decline, God intervened with a First Great Awakening from 1720–1760. The Second Great Awakening came in answer to God’s people praying and repenting in 1800-1840.

The time is now for another supernatural visitation! It’s our only hope to experience the transformation of our crumbling culture before it’s too late.

Our nation was established on Judeo-Christian foundations, no matter what some politicians and secular “authorities” state. We have a biblically based heritage, and we must contend for its restoration.

John Winthrop, first governor of Massachusetts, alerted us: “We must consider that we shall be as a city upon a hill. The eyes of all people are upon us. So that if we shall deal falsely with our God in this work we have undertaken, and so cause Him to withdraw His present help from us, we shall be made a story and a by-word to the world.”

Daniel Webster, senator and secretary of state for three presidents, also warned: “If we abide by the principles taught in the Bible, our country will go on prospering. … But if we and our future generations reject religious instruction and authority; violate the rules of the eternal justice, trifle with the injunctions of morality, and recklessly destroy the political constitution which holds us together, no man can tell us how sudden a catastrophe may overwhelm us and bury all our glory in profound obscurity.”

In April 1789, the war for America’s independence had been fought and won. A new nation formed around a radical constitution born out of revival preaching and the Great Awakening.

George Washington was sworn in at Federal Hall in New York City, becoming our first president. Then he led the inaugural delegation to St. Paul’s Chapel, which we know today as the site of ground zero.

Picture the Founding Fathers, representatives, senators and justices kneeling for two hours and dedicating America to God. Simultaneously, throughout the nation, pastors rang their church bells, calling the people of America to prayer in committing the new government to God.

In the formation of our nation, it was America’s political leaders and pastors who unapologetically led the grassroots fight for freedom and consecration of our new nation to God.

Unfortunately, as our developing nation prospered, complacency, compromise and disobedience set in as it has repeatedly, including today. So pastors led the way in humble prayer and repentance in turning back to God.

Historian David Manuel wrote of the First Great Awakening: “So many people had sincerely and publicly repented of their sinful ways, so many lives were truly reformed, so many broken relationships were restored and so many churches solemnly renewed their covenants that God relented and poured out His mercy. There was a sense of freshness in the colonies, a sense of cleanness and new hope.”

Jesus told us numerous signs of the end of the age as we “watch and pray” (Mark 13:33b) but the signpost that’s most significant is worldwide spreading of the gospel of the kingdom (calling all to repent and respond to His lordship) “and then the end will come” (Matt 24:14b).

Here’s the Deal: As sin abounds in our generation, let’s repent of all compromise and reconsecrate ourselves to be faithful in proclaiming the transformative message of the gospel and truth. Go to “Loving Lifestyle Evangelism” and be freshly inspired and equipped by these free YouTube videos.

“Larry, I will never forget you helping me write my personal testimony tract that I’ve given out all over North Carolina! Thank you for helping me share the gospel in such an effective way.” —Robin M.

The post Appearance of Cover Model on This Iconic Magazine Another Symptom of America’s Dire Condition appeared first on DailySurge.