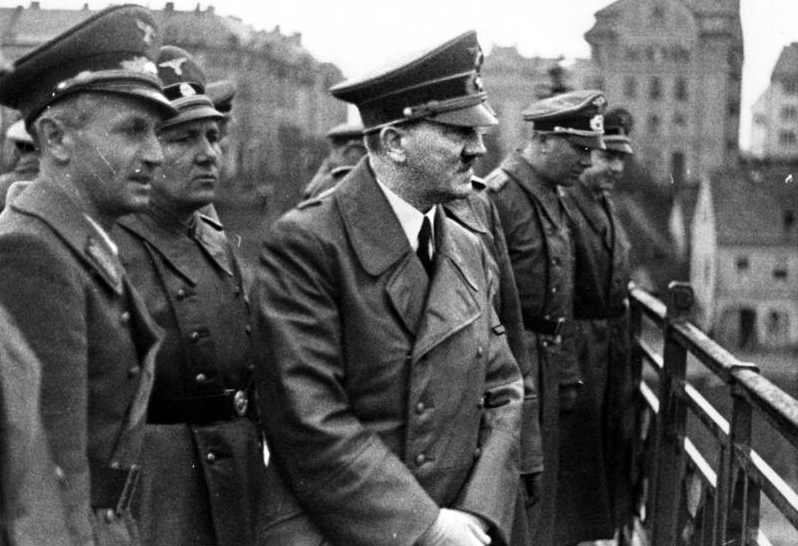 Surge Summary: Americas spiritual decline, which began when the nation abandoned its godly heritage in the late-19th century, is reaching a climax with today’s woke-ism, secularism and the current COVID dictatorship. Christians must push back, enter the battle for their country.

Twice rejected by Vienna’s prestigious Academy of Fine Arts, the Austrian wannabe painter Adolf Hitler [1889-1945] was appointed chancellor of Germany on Jan. 30, 1933. Germany, the “country of poets and thinkers,” would now be led by someone who fraternized with cranks and criminals and was often seen carrying a dog whip in public.

The Third Reich (“the third empire”) had been inaugurated.

George Strausser Messersmith (1883-1960) was the United States consul general in Berlin during the rise and initial Nazification of Germany from 1930 to 1934. Nicknamed “40-page George” for his lengthy missives to Washington, Messersmith reported extensively on the Nazi policy of Gleichschaltung: Hitler’s enforcement of “political conformity in all sectors, from the economy and trade associations to the media, culture and education.”

Composed of the adjective gleich, meaning equal, same or identical, and the noun Schaltung, set-up or switch, the German term Gleichschaltung refers to the enforced shift to sameness or conformity. Imposed or made mandatory, it is the ultimate and literal consequence of the process of equality in terms of outcome, or “equity” in popular progressive parlance.

The Merriam-Webster Dictionary provides the perfect definition of the term Gleichschaltung: “the act, process, or policy of achieving rigid and total coordination and uniformity (as in politics, culture, communication) by forcibly repressing or eliminating independence and freedom of thought, action, or expression; forced reduction to a common level; forced standardization or assimilation” (emphasis added).

Equal to foreign diplomats misjudging Hitler’s rise, Republican leaders misjudged the “15 days to flatten the curve” scheme from March 2000. We may never bring the full truth to light, but it would help to know whether Robert F. Kennedy Jr.’s claim is accurate that Dr. Anthony Fauci profits personally by promoting vaccines.

The parallels between the early 1930s German subterfuge and contemporary America are becoming increasingly alarming, particularly with the latest COVID variant appearing to mutate into unmitigated totalitarian dictatorship. Closely resembling Nazism’s Gleichschaltung, the Biden administration and Speaker of the House Nancy Pelosi are thus actively engaged in forcibly repressing or eliminating independence and freedom of thought, action, or expression.

What’s happening in America is spiritual. It all started in the late 19th century when America changed horses in midstream, maintaining this radical switch ever since. The state has become the place of worship, and its public education and school parishes have been converted into centers for evangelism and indoctrination of religious secular propaganda.

This put an untimely end to a nation founded “for the glory of God and advancement of the Christian faith.” America’s levers of culture power are now manned by unhallowed, militant devotees to secularism. Holding sway over the spiritual, intellectual, educational, economical and vocational mountains of influence, they dominate every facet of American life … that is, of a once “free people.”

Here is a sampling of the utter muddle that secularism has created:

A professor at an elite medical school abjectly apologizes to his students for using the term “pregnant women,” implying that only women can get pregnant: “I don’t want you to think that I am in any way trying to imply anything, and if you can summon some generosity to forgive me, I would really appreciate it. It was certainly not my intention to offend anyone.”

Minnesota fourth graders are told to hide from their parents “equity survey” questions on race and gender.

One’s sex should be removed as a legal designation on the public part of birth certificates, according to the American Medical Association.

The military is called out to enforce lockdown in Sydney for at least a month. No leaving the house except for government approved reasons. Australia has seen nine COVID deaths.

Is there a way out of this muddled mire?

We the people must come together and pray! Every church in America should have a pastor, elder, deacon or congregant running for local office (school board, city council, county commissioner and so on) in 2022, 2024, 2026 and thereafter.

Jesus’ ekklesia kingdom assignment from Matthew 16:18 should be the focus of American Christendom, with the standard of measure being such issues as “Is our city becoming more like the kingdom of heaven?”

Any casual observer of American Christendom will easily recognize the great difference between the modern church and what Jesus said He would build. Over the last century Christian leadership collectively moved from producing and launching leaders into the public square to merely feeding flocks of voiceless followers in its increasingly isolated communities. The church went from apostolic leadership to pastoral leadership.

We have arrived at our kairos, the New Testament Greek word for “the appointed time in the purpose of God.” In his Gleanings in Joshua, Arthur W. Pink says this about it: “It would indeed be strange if we apprehended how that on the one hand Canaan was a free gift unto Israel, which they entered by grace alone; and on the other that they had to fight for every inch of it!”

In closing on a political note, we turn to American writer, blogger and television commentator Benjamin Domenech (born 1982), who in a recent article titled, “The Permanent Pandemic Game,” suggested why Nancy Pelosi is masking up again.

“This is about politics, not saving lives. On May 13th, Joe Biden announced that if you were vaccinated, you no longer needed to wear a mask … Masking is theater.

“Democrats are now counting on being the party of the permanent pandemic as their path to victory. Democrats see the tidal wave coming toward them in the upcoming midterms and they are fearful and desperate. They want to maintain the fire hose of money from Washington, the general feeling of emergency status, their defense of the lazy feckless and evil teachers’ unions, and of course the emergency pandemic rules related to mail-in ballots and voting. It is their only hope to prevent what everyone sees coming.

“There is only one way to stop this predicament, to wreck the mess of mandates and requirements and ‘let’s try all the things that made no difference’ approaches, and ensure your children are not ‘distance learning’ for another year: the ballot box.”

As Christian Americans we must make a choice: We either engage in the public square by going to the ballot box, or we head towards places prepared for those unwilling to fight, such as concentration camps, the gulag and the grave.