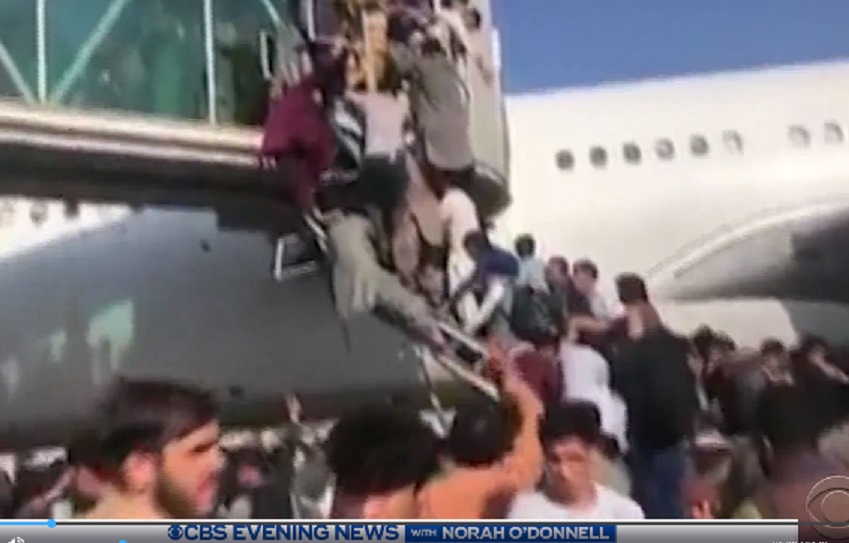 The story of almost 20 years of American involvement in Afghanistan has ended in unmitigated disaster. In fact, it would be difficult to imagine a worst-case scenario than the present one. But for now, here are 10 immediate reflections.

“President Joe Biden addressed the nation about the state of the U.S. withdrawal from Afghanistan on Monday — mainly, it seemed, to say he regretted nothing. . . . He blamed the Taliban’s rapid advances across the country on Afghan security forces’ failing ‘to mount any real resistance to the Taliban.’

“But the president had virtually nothing to say about what’s on everyone’s minds: how poorly prepared the U.S. was for the Taliban’s blitz and the vulnerable position he has left so many Afghans in as a result.”

Not even MSNBC was in a mood to give the president grace for his dreadful decision.

We will never unsee what we saw.

Accordingly, “the Afghan Constitution that Afghanistan’s then-President Hamid Karzai formally ratified on January 26, 2004 . . . is written in the name of ‘We the people of Afghanistan, believing firmly in Almighty God, relying on His divine will and adhering to the Holy religion of Islam.’”

The problem, then, is not that the Taliban are Muslims. It is that they represent a more extreme form of Islam, one that holds firmly to Sharia Law in its most draconian forms.

According to Forbes, “In the 20 years since September 11, 2001, the United States has spent more than $2 trillion on the war in Afghanistan. That’s $300 million dollars per day, every day, for two decades. . . . In baser terms, Uncle Sam has spent more keeping the Taliban at bay than the net worths of Jeff Bezos, Elon Musk, Bill Gates and the 30 richest billionaires in America, combined.”

Did everyone have altruistic motives in calling for our ongoing involvement in Afghanistan?

Already in July, Dr. Sajjan Gohel, a security and terrorism analyst, told the BBC, “The Biden withdrawal from Afghanistan makes a Taliban takeover inevitable and gives al-Qaeda the opportunity to rebuild its network, to the point where it could once again plot attacks around the world.”

There is a reason why people were actually clinging to American military planes leaving the airport.

But with our misguided policies in Iraq leading to national instability, the genocide (or exiling) of hundreds of thousands of Christians (and Yazidis and others), and the rise of ISIS, and now with the total failure of our Afghan policies, we need to ask ourselves some hard questions. Do we really know what we’re doing? (It remains to be seen whether the Trump strategy would have ended better than the current ending.)

And what of all those who served and returned to America suffering physical and emotional wounds? And what of the cost to all the families?

Somehow, some way, we must tell those who served and died that despite the dreadful outcome, they gave themselves for an important cause: wanting to better the lives of the people of Afghanistan and wanting to fight back against Islamic terror. Surely, there is nobility in the sacrifice, regardless of the end results.