Two explosions at Kabul airport have killed at least 13 people, including children, and injured at least three US troops just hours after intelligence officials warned of an imminent threat to the crowd gathered there trying to escape the Taliban.

We told you that the Biden administration would have blood on their hands for their dirty deeds in Afghanistan, and today, 5 days before the evacuation deadline, the blood has begun to flow in the nation where Walkaway Joe Biden has created the world’s largest Islamic terror state. 3 United States Marines are among the dead in this attack, and sadly their deaths are only the first of many that the world will witness in horror in the coming days and weeks. Joe Biden’s hands are dripping with blood.

“The wicked shall be turned into hell, and all the nations that forget God.” Psalm 9:17 (KJB)

The images of Joe Biden and Kamala Harris smirking and laughing when asked about Americans stranded in Afghanistan should be a picture that every American needs to burn into their brains so we never forget. This is what it looks like when a nations falls, when its leaders are corrupt. Everything that is now unfolding has been long planned and is quite intentional, the New World Order is taking over and the blood is being shed as a ritual sacrifice. Now would be a good time to throw yourself at the feet of Jesus, and plead His mercy and grace. Pray for the families and loved ones of the fallen.

‘ISIS suicide bomber’ kills 13 at Kabul airport: Multiple casualties – including children and three US Marines – as two explosions tear through crowd, hours after Westerners were warned to stay away because of ISIS attack

FROM DAILY MAIL UK: The first blast was caused by an ISIS suicide bomber in a vest, detonating outside The Baron Hotel, where Westerners were staying before their evacuation flights. A second explosion was reported nearby a short time later at the airport’s Abbey Gate, where crowds of Afghans have been gathering for more than a week in the hope of being put on one of the evacuation flights out. That explosion was caused by a car bomb, according to unconfirmed reports.

Pentagon Press Secretary John Kirby tweeted there were a ‘number of US & civilian’ casualties but it’s unclear if he was referring to deaths or injuries.  At least three US troops were injured and it remains unclear if any Americans were killed. The nationalities of all of the victims are not yet known. 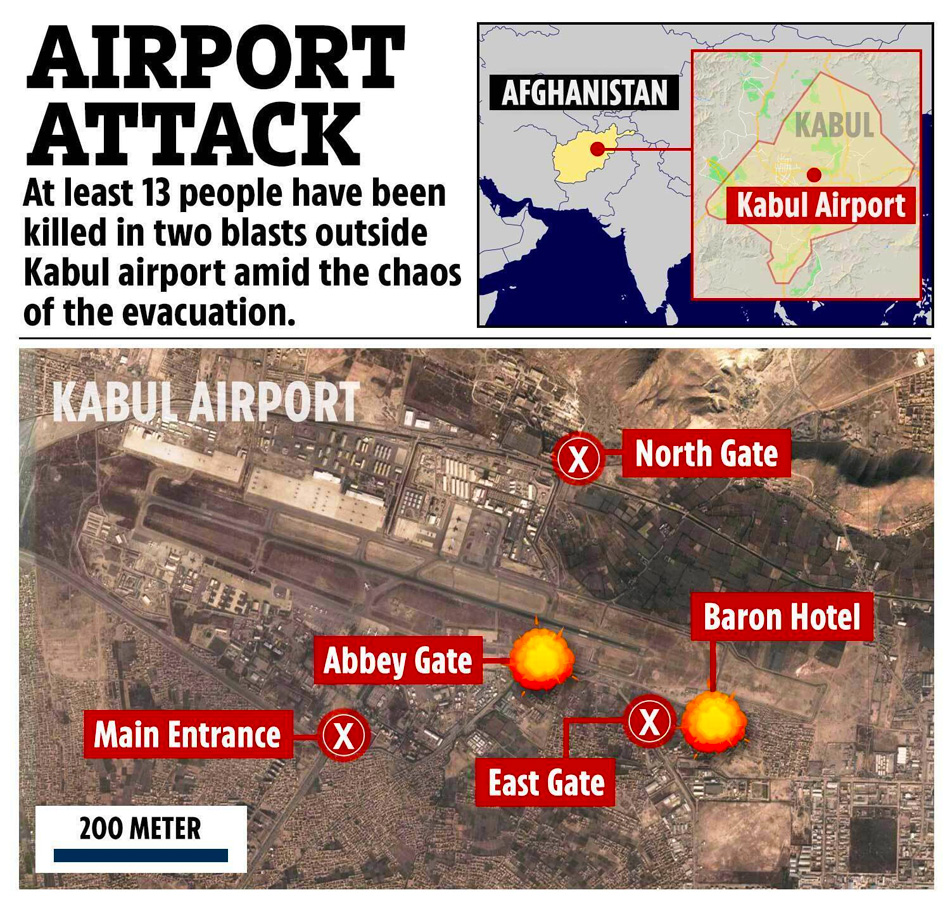 President Biden is in the situation room at the White House, where he will be joined by Defense Secretary Lloyd Austin, Joint Chiefs Chairman General Mark Milley and Secretary of State Antony Blinken.

Harrowing footage from the blast site show bloodied Afghans being removed from the scene on wheelchairs. One witness reported that a baby was among those killed. The attack came just hours after officials were warned that ISIS was plotting something against the crowd of Western citizens and allies at the airport.

US troops on the ground closed gates at the airport and the State Department warned people not to congregate at the airport. Britain told its citizens to run for the Pakistan border instead.

The Taliban claimed Kabul on August 14 and there has been a frantic scramble to get Western citizens and Afghan allies out of the region by August 31, the Taliban’s ceasefire deadline.

4 days ago @JoeBiden was asked about the threat posed by ISIS against Americans in Afghanistan, he laughed and walked away pic.twitter.com/zq0Zwkb9fU

As many as 1,500 Americans remain stranded in Afghanistan with increasingly bleak options;

Despite the escalating chaos, the US’s top diplomat made the astonishing claim on Thursday morning, before the explosion, that it was ‘relatively safe’ on the ground and people should still be able to make their way there.

Now, Americans in Afghanistan are being told not to go to the airport.

The Pentagon on Thursday denied fears that the US was going to withdraw within 36 hours, but Press Secretary John Kirby offered no date for when troops would leave, saying only they would stay in Afghanistan until the ‘end of the mission’. It offers little hope to the Americans on the ground who are stuck behind Taliban lines, unable to get to the airport.

Overnight, 5,100 people were flown out of Kabul on US military planes. Another 8,300 were saved by coalition flights. The total – 13,400 – was drastically less than the 19,000 rescued in the previous 24 hours. Ross Wilson, the Acting US Ambassador in Afghanistan, said on Thursday his office was making ‘phone calls’ but that many Americans didn’t leave when they had the chance and are now on their own.

‘We have through the State Department been placing phone calls to virtually all those who have registered with us to find out are they still in Afghanistan, are they interested in leaving Afghanistan, do they need help.

‘People chose not to leave – that’s their business, that’s their right. We regret now that many may find themselves in a position that they would rather not be in,’ he told CBS This Morning on Thursday.

Britain is now telling its citizens that anyone who hasn’t yet been able to get out should make a run for the border and seek refuge in Pakistan. READ MORE