Hurricane Ida has made its way to the shoreline of Louisiana, with unbelievable fury pent up in her massive eye, with coming destruction that will be heartbreaking to watch and mind-numbing to comprehend. In a very ironic twist, it is hitting Louisiana on the exact anniversary of Hurricane Katrina, a storm that claimed more than 1,800 lives, and it ranked as the costliest natural disaster in U.S. history. Hurricane Ida is every bit as powerful as Katrina, so now would be a great time to pray for everyone in her path as we did on this morning’s Sunday Service.

Right about now, you could make a pretty good case that America is under judgment from God, not just because of Ida, but because of everything else taking place all at the same time. Did you know that Joe Biden met with the new Israeli PM Naftali Bennett on Friday to discuss dividing Israel to create the Two State Solution? God sure did. Think of how bad Katrina was, and she was only a Cat 3, Ida is a Cat 4. Please pray for the people of Louisiana.

FROM  ACCUWEATHER: Evacuations took place Saturday across parts of the Gulf Coast as officials around the region urged residents to make final preparations and heed warnings ahead of the life-threatening impacts posed by Hurricane Ida, which AccuWeather forecasters expect will roar ashore Sunday. 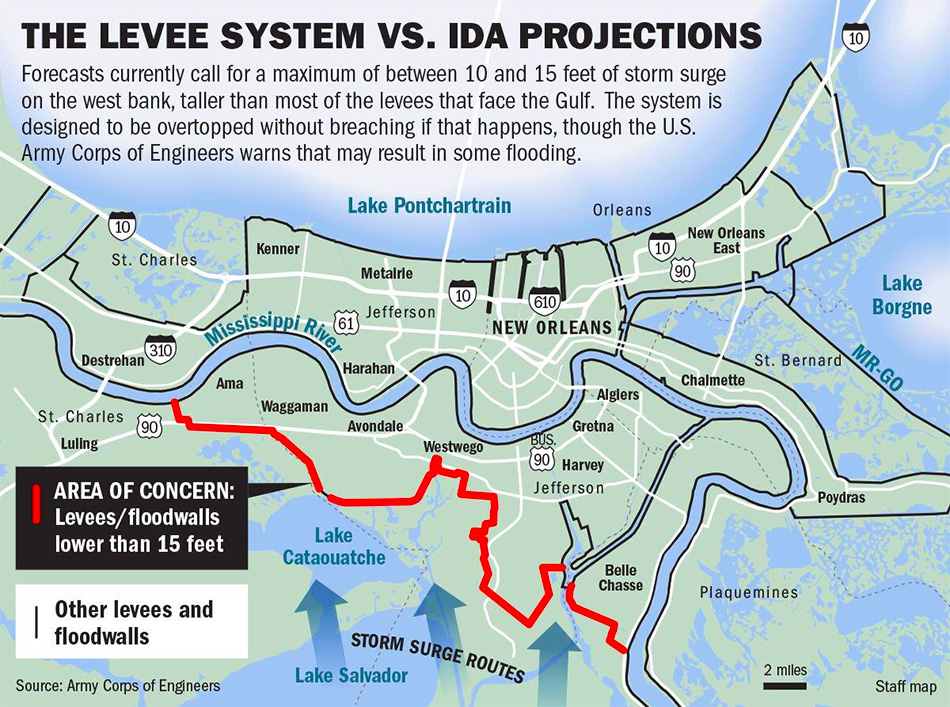 On Saturday afternoon, Ida began to rapidly intensify over the Gulf Coast, with wind speeds increasing from 85 mph to 105 mph, making the storm a Category 2 hurricane (maximum sustained winds of 96 to 110 mph) on the Saffir-Simpson Hurricane Wind Scale. Early on Sunday morning, Ida again strengthened into a major Category 3 hurricane, then quickly became a Category 4, packing 140 mph sustained winds.

As of 11 a.m. CDT Sunday morning, the NHC said Ida’s sustained winds were hitting 150 mph, with gusts even higher. The storm was swirling over the Gulf of Mexico and moving northwest at a speed of 13 mph, within 25 miles of Grand Isle, Louisiana. Hurricane-force winds extended outward up to 50 miles from the storm’s center and tropical-storm-force winds extended outward up to 150 miles.

“Preparations to protect life and property should be rushed to completion today in the warning area along the northern Gulf coast,” the National Hurricane Center warned on Saturday. It added that the hurricane was expected to bring “life-threatening storm surge flooding, damaging winds and flash flooding” to potions of the Louisiana and Mississippi coastlines.

Louisiana Gov. John Bel Edwards declared a state of emergency Thursday due to the potential impacts from the hurricane. He also called on residents to heed the warnings. READ MORE

The post Hurricane Ida Is Now A Category 4 As It Blasts Ashore Gulf Coast Louisiana With 150 Mile Per Hour Sustained Winds And Stronger Than Katrina appeared first on Now The End Begins.